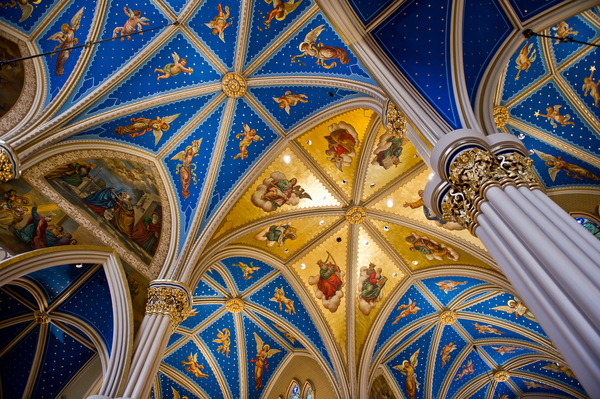 I was one of those kids raised on Notre Dame. Maybe you were too. At the age of four I stared up in rapture at the blue and gold stars on the ceiling of the Basilica and fell in love with the place. When high school came, the golden dome seemed to be the light shining at the other end of the tunnel. Never was I more relieved and happy than on that day when I found a big envelope from ND waiting in my mailbox.

As I was entering my freshman year at Notre Dame, a then-senior told me something that gave me pause. “These are going to be the best four years of your life,” she said.

The four best years of my life? Notre Dame was a dream that was coming true, and I fully intended to have four enriching, life-changing years. But the four best? After graduation it would all be downhill? Even I, enamoured as I had always been (and probably always will be) with the place, couldn’t agree with what the girl said; but it worried me a little.

Classes started, and time started doing that thing it does — passing. My days at Notre Dame were, in the hackneyed phrase, everything I imagined and more. And in the course of mind-bending classes, intense conversations over dinners at South Dining Hall, and windy nights when the trees on campus seemed to whisper secrets, I began to understand why the senior had said these were the four best years of our lives.

As my own senior year came to its end, I couldn’t contemplate how much I would miss it. Not yet. During senior week and through graduation, you’re caught up in it all — in the friends that have become like family, in all you have accomplished, in the campus just ripening into the fullness of summer green, in all that has formed you into a stronger you.

You catch your graduation cap, return the collegiate black gown, snap the last photos, climb the steps of Main Building (if you’re an unbeliever like me, it won’t be for the first time, but you’ll be relieved that you no longer have to feel guilty about it.), and then you leave. And there’s a relief, at first, that what has been so long looked forward to, so long dreamt of and feared, is at last over.

Notre Dame graduates, even in their first year out, go on to find jobs at their dream companies, to embark on years of service, to pursue graduate degrees, to get married, to enter the seminary, to travel the world. A new dream of mine led me to Florida, where I found a job at Walt Disney World, a place, like Notre Dame, I have always loved. I drove past castles and spaceships going to work every day. I could ride Big Thunder Mountain as many times as I wanted. I interacted with so many interesting guests and fellow cast members. I went to Mass at churches with palm trees in front of them.

But even at those tropical churches, I would start to remember Mass at the Basilica – and I’d have to stop that thought right there, because the tears would already be most unreasonably welling up. It was painful – extremely painful – to remember those long-beloved stars on the Basilica ceiling, the camaraderie of my friends, and the way the candles at the grotto had glowed on snowy nights. I felt as though I had left them behind forever, as though they didn’t exist for me anymore. When I tried to picture Notre Dame, all I could see was a void. Throughout new and wonderful experiences, a dark cloud seemed to be following me.

When I talked to friends, now scattered around the globe with new lives and new jobs, they felt the same way. Months and months after graduation, when we had already accomplished so much, none of us were quite satisfied. “I still miss Notre Dame,” one friend said in an email, “Does that ever go away?” We always knew that we would have to leave Notre Dame after our allotted four years. We knew that life was going to continue. But that first year out sometimes felt like a year of just getting by.

I returned to campus for the first time at Easter – almost a year after graduation. It was the Wednesday of Holy Week when my cab took me down Notre Dame Avenue towards Main Circle. The sun was shining; the Basilica bells were ringing out the hour; classes had just let out and students were streaming across the quad. I had been afraid I would feel like I didn’t belong anymore, but when I stepped out onto South quad, I realized I needn’t have worried. Coming back to campus still felt unquestionably like coming home, and I knew it always would, every time I returned as an alumni. I would always belong here.

When I spoke to old friends who were still students, now seniors themselves, and listened to their worries about the future, I realized I didn’t envy them, though they were still in the midst of their Notre Dame experience. After they left, they would make the same slow, sometimes painful, but ultimately reassuring discovery that I had made over the past year: though I had left the physical place behind, I had still carried Notre Dame with me and would always have it.

To those soon-to-be graduates, the class of 2013: because Notre Dame is the amazing place it is, when you leave, you may find a dark cloud overhead. It is a real, almost tangible loss, so of course it’s going to leave an ache. Probably more than you expected.

But that pain isn’t a bad thing. It represents the joy and growth Notre Dame gives. And the sense of loss doesn’t hold you back; it’s just Notre Dame continuing to challenge you.

On that first Easter visit back to campus after graduation, I found the Lenten readings took on a whole new meaning. Christ spent 40 days in the desert, and when you leave ND, you enter a spiritual and emotional desert. But it’s also written that through the desert, Christ makes a way. In the wasteland, He creates rivers. God will see you through that post-collegiate desert. He will show you a way.

On the last night of my visit, I went for a walk to see the dome gleaming gold against a midnight blue sky. I realized that the fear that senior had voiced – that fear I had had as well – that being at Notre Dame was the best four years of my life, now over and gone – was a groundless one. The dome glowing in front of me had been with me all along. During those four formative years, the beauty of campus and the spirit of Notre Dame soak into your skin, so that these aren’t the only years you have here. Notre Dame becomes a part of you.

Emily S. Whalen is a former Disney cast member currently pursuing a career in writing back in her native Pennsylvania. She blogs about all things Disney at www.apinchofpixiedust.blogspot.com.