All of my life I have been running. In our family album there is a picture of me in diapers with my left arm in a sling. Big tears run down my cheeks. Not yet a year old, I had been running in my aunt’s house, slipped on the high gloss and broken my arm. 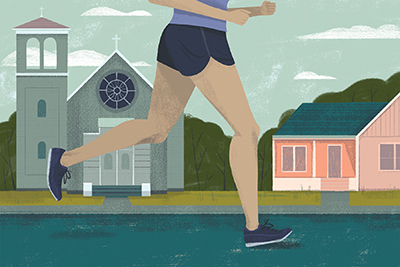 At picnics I always won the foot races. When I wasn’t running on the green, I was running on tennis courts, swinging highly unorthodox strokes, managing only because my legs were fast. I ran to school and back, four trips a day. I ran through piles of leaves in fall and piles of snow in winter. I ran to meet friends and schoolmates at various corners. I ran from a dark-night stalker. I ran when the snowball I threw entered the open window of a delivery truck and struck the driver. In such a manner I ran through adolescence.

In time the black habit came off, the nun stayed on, and I went back to running in singlet and shorts, but with a difference. This time I had the Jesus Prayer on my breath.

I look at my feet, already in sweat socks. One foot is Mary, wanting to stay put. The other foot is Martha, itching to go.

Out onto the broken streets and sidewalks of Syracuse, New York, I go, with the old Allied Chemical Company on one side and the Metropolitan Sewage Plant on the other. In between there are ordinary homes and churches, a library and two funeral homes, gas stations, bars, mom-and-pop stores, one school and a large park. This is the time and place for the Jesus Prayer.

The prayer comes to us from a Russian pilgrim whose story is told in a small book called The Way of a Pilgrim. He was a marathoner, this pilgrim, walking many miles a day. On his back he carried a knapsack of dried bread. In his hand he carried his Bible, one line of which caused the pilgrim great difficulty. “Pray without ceasing,” the Apostle Paul exhorted. How was this possible, the pilgrim wondered. A person has to make a living and cannot always be praying.

So the pilgrim walked, looking for someone who could enlighten him.

Finally, he met a starets who taught him how to say the Jesus Prayer on his beads. From then on the pilgrim prayed, “Lord Jesus Christ, have mercy on me.” He prayed 12,000 times a day, so that he wore out the thumb on his left hand.

Soon the prayer went from his lips to his heart and started saying itself there to the rhythm of his heartbeat. All the while the pilgrim walked those many miles, he was breathing in on “Lord Jesus Christ” and breathing out on “have mercy on me.”

Somehow when I run, the prayer simplifies itself to breathing in on Jesus and breathing out on mercy, synchronized with my moving feet, slapping the streets of the neighborhood. All of which may just as easily be done by walking.

St. Paul reminds us: “All the runners in the stadium take part in the race, but the prize goes to one person. Run so as to win the imperishable crown.”

And so I run for the imperishable crown.

I run for the air and the prayer.

I run for a sound mind in a sound body.

I run because the road is there and I have legs.

I run for the smell of the pines in the park, the white looks of them in

I run for one who lost a leg to scleroderma and cannot run.

I run for those running for their lives.

I run because if a woman is not strong, she had better be fast.

I do not run to compete against other people, a clock or myself.

Nor do I run to inflict pain on myself. I run because it makes me feel good, not miserable.

I breathe for one who lugs an oxygen tank to church and for one whose left lung collapsed.

I breathe for all sopranos who breathe song over the air waves.

I breathe to honor the One who breathes life into us all.

Joan Sauro is a Sister of St. Joseph of Carondelet. The recipient of two fellowships in fiction from the New York Foundation for the Arts, she has written and illustrated eight books and hundreds of articles for national magazines. Her latest book is We Were Called Sister.