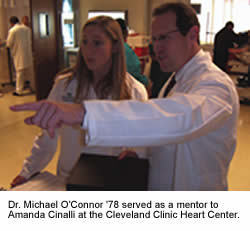 On a warm, autumn morning in 2005, as other students joined in the pageantry of a football Saturday on the Notre Dame campus, sophomore biology major Susan Yanik headed to a medical lecture. She was the only student who did.

Yanik, an aspiring physician, was responding to a meeting announcement for the Dr. Tom Dooley Society, a new organization dedicated to the medical alumni of Notre Dame. The speaker on the agenda was Dr. Donald Condit ’80, an orthopedic surgeon and president of the Dooley Society, who detailed his volunteer work with Helping Hands Medical Missions in El Salvador.

That morning, while other students were milling around campus excitedly preparing for game-day festivities, Yanik was having an epiphany.

“After Dr. Condit’s presentation, I remember thinking ‘This is exactly what I want to do with my life,’” Yanik recalls. “I wanted to go on Catholic medical missions. I wanted to go to medical school. I wanted to help people. This meeting lit a fire in me.”

Soon afterward, Yanik emailed the founder of the Dooley Society, Dr. Matt Hubbard ’02, to find out how she could get involved. He appointed her event co-chair of the organization, a role that had her setting up meetings similar to the one that had attracted her to the Dooley Society. Her first task? To attract more students to the group.

“In the beginning, hardly any students came to the meetings,” says Yanik, who was disappointed by the lack of participation.

“I was so excited about this group, and I really wanted students to get involved,” she says. “They didn’t know what they were missing—this organization really builds on the Notre Dame ideal. All these successful and well-established medical professionals were offering their help. Tons had given me their personal e-mail addresses and said ‘Let me know what I can do to help you in your career.’ I was able to get to know these doctors on a personal level, and that was just unheard of for a student.”

Now in its third year of existence, the Dooley Society connects Domer physicians, dentists and other licensed practitioners with students, the University and each other. Through mentoring, geographic shadowing programs, seminars and medical mission stipends, the society fosters a symbiotic bond between students and professionals.

Rev. James Foster, CSC, M.D., ’77, ’94M.Div., assistant dean of the College of Science and chair of preprofessional studies, serves as the conduit that brings these students and medical professionals together. Because of the caliber of Notre Dame students, he says his job is fairly simple.

“Notre Dame students are valued by medical schools because they’re superior not only in academics but also in terms of service,” Foster says. “They incorporate a sense of ethics in their lives which only grows stronger when they are challenged. They are intellectually qualified and inclined to help others. That’s why I volunteered to be the one to connect them with mentors in the medical field.”

That connection, according to Dooley founder Hubbard, is what had been missing for a long time. “Because Notre Dame doesn’t have a medical school, there was no way for doctors and med students to stay in touch with each other,” he says. So as a third-year medical student at the University of Rochester, he formed an alumni organization with a mission to coordinate ND alumni who are medical professionals around mutual interests of professional development, community service and mentoring to current students.

Named after Dr. Tom Dooley, who was a Notre Dame student in the 1940s, a Navy doctor in Vietnam and the founder of Medical International Cooperation Organization, the Dooley Society was officially approved by the Notre Dame Alumni Association in 2005.

That was perfect timing for Yanik.

“I always heard people talk about the ND business school and the connections it provided for students, but I never heard about it for science people like me,” Yanik says. “There I was, a college undergrad meeting with a bunch of very talented medical professionals who not only gave me advice on the medical school application process but taught me the ins and outs of interviewing.”

“This was a godsend,” Yanik says. “And the fact that all these doctors got together to help others was such a motivation for me. They’re extremely intelligent and so willing to give back.”

For the first nine months of its existence, the Dooley Society had only three members, including Hubbard. By the end of 2006, membership had grown to more than 900. By July 2007, the society had more than 1,000 dues-paying members. A portion of the dues helps fund stipends for students serving on medical missions.

While a majority of Dooley Society members are medical professionals, the number of student participants is growing as undergrads begin to understand that membership—forgive the cliché—truly has its rewards. Marie Brenner is one of those students. Now a senior majoring in preprofessional studies, Brenner, a Dooley Society member since 2005, studied in Puebla, Mexico, last summer. The experience involved taking a class as well as a clinical internship that, in her words, was “one of the very best experiences at Notre Dame.”

“The things I saw . . . the things I experienced . . . you just don’t get that with a traditional education,” Brenner says.

Her training included studying the ways of curanderos—non-medical healers who are prevalent throughout Mexico. She learned about alternative treatments, such as monitoring a person’s pulse to diagnose hypertension, using plants to make “remedies” for common ailments and river “cleansings” to treat back pain.

During her hospital rotation, Brenner was able to watch over a surgeon’s shoulder as he performed a hernia operation on a child. She also sat in on a hysterectomy and worked in an emergency room treating patients with minor injuries.

Those experiences have elevated her confidence as she begins applying for medical schools. “I feel better prepared than the average undergrad looking to apply to medical school,” says Brenner. “Going through these medical rotations has given me so much confidence. I feel like I’m in a good place to go out into the field. I feel like I really understand what a career in medicine is all about.”

Helping students better understand what’s in store for them as medical professionals is exactly what persuaded Dr. Michael O’Connor ‘78 to mentor student members of the Dooley Society. O’Connor is the first to admit that he wasn’t initially very active in the society. And with good reason: In addition to his position as a cardiothoracic anesthesiologist at the Cleveland Clinic, he’s a captain in the Medical Corps of the U.S. Naval Reserve and serves as a community instructor in the Northeastern Ohio Universities Masters of Public Health Program. In his “spare time,” he’s an instructor in HIV/AIDS for the American Red Cross.

But when he got a call from the Dooley Society asking if he’d like to be a mentor for Notre Dame students, he readily agreed. And he’s quick to point out that he’s getting just as much from the experience as the students he mentors.

“Part of why I love being a mentor is because it helps me feel closer to Notre Dame,” O’Connor says. “A lot of people look to the football program to maintain their allegiance to the University, but it’s really about the students. Being a mentor helps me feel so connected to them.”

The first student assigned to O’Connor was Amanda Cinalli. She joined him during the 2006 Christmas break. Rather than have her merely shadow him while he worked, O’Connor decided to get Cinalli more involved.

“When I was a premed at ND, I didn’t have the opportunity to get hands-on experience,” O’Connor says. “When you apply to med school, one of the first things they ask you is what kind of exposure you’ve had to the medical field. I didn’t have any. And I wanted to remedy that for future doctors.”

With that in mind, O’Connor’s goal for Cinalli, then a junior, was to have her leave the hospital rotation with some actual experience. “So one of the first things I did was to get her into surgeries,” he says. “We also developed a curriculum with goals and kept track of the things she was doing. And at night, I would give her articles to read as homework.” By the time Cinalli left her rotation with O’Connor – which lasted nearly a month—she had a cardiovascular rotation from the Cleveland Clinic Heart Center to put on her resume.

“I get goose bumps from doing this,” O’Connor says. “First and foremost, I’m an educator, and it’s unbelievably rewarding to teach people who are just starting out because you can really make an impression on them. They’re impressed with the things they see and the things they get to do. I want students to really learn what it means to be in this vocation. Their desire for excellence spurs your desire for excellence, and that’s rewarding in a way that I can’t even begin to describe.”

Angela Sienko is the alumni editor of this magazine. For more about the Dooley Society, visit www.DooleySociety.com.