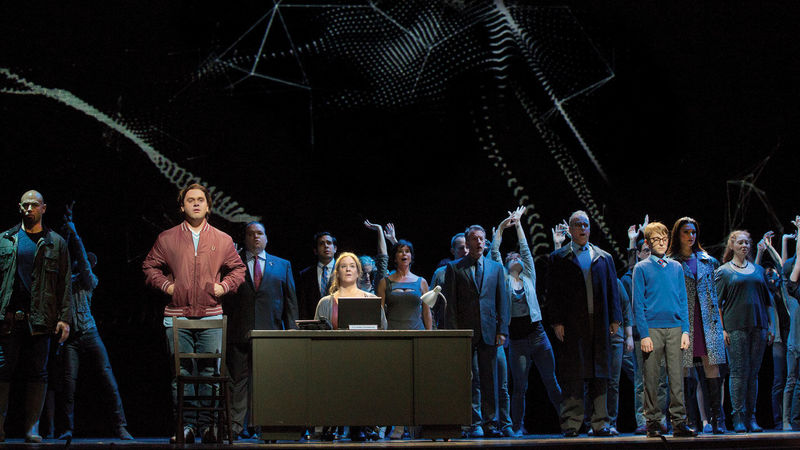 When Paul Appleby ’05 appears on an October afternoon in New York City, he is virtually unrecognizable and literally larger than life.

His face is printed on an enormous banner hanging from the façade of the Metropolitan Opera, as if he were some operatic deity overlooking crowds of tourists in Lincoln Center. But the face is not quite his. It has been made softer, younger-looking, transformed by a blue-cast illumination.

Beneath not-quite-Appleby’s face are two words: Two Boys. That’s a new opera written by Nico Muhly with a libretto by Craig Lucas on commission for the Met and the English National Opera. When Two Boys takes the Met stage on October 21, throngs of operagoers press under that banner to see Appleby in the leading tenor role. It is the apex of his young career so far, by nature of both the piece (the newly commissioned opera draws scrutiny from an audience not known for its progressivism) and the venue (the Met Opera is, well, the Met Opera).

At only 30, Appleby is rapidly ascending the ranks of the opera world as one of the finest lyric tenors of his generation. He earned a master’s degree and an Artist Diploma in Opera Studies from Juilliard and is also an alumnus of the Met’s prestigious Lindemann Young Artist Development Program, where he rubbed shoulders with Plácido Domingo and Renée Fleming. He has already earned glowing reviews for performances around the world in operas and in solo recitals.

But two weeks before the Met curtain rises on the biggest performance of his young career, Appleby walks through his adopted home of New York unrecognized, even though his Photoshopped face gazes over Lincoln Center.

In person, he is boyish, bright-eyed and surprisingly laid-back. Case in point: Of all the things to discuss, Appleby really wants to talk about the Bruce Springsteen tribute band, The Heroes We Thought We Had To Be, that he formed with his friends during his junior year at Notre Dame.

“We didn’t just tribute them, we embodied them,” says Appleby with a laugh. “I’m still really proud of that. . . . It started out kind of tongue-in-cheek, like we were having a goof. But we genuinely did some expressive performing of songs.”

He can’t help his enthusiasm. He momentarily embodies The Boss and growls the chorus of “Lonesome Day.”

“That was the most fun I’ve ever had in my life, doing those shows,” he says. “Of course, I was thrashing my voice.”

So here is Appleby, the prodigy groomed for the grand stage, the face of the Metropolitan Opera, still very much the kid howling his voice raw in some derelict South Bend dive. And he is so unassuming that one could be tempted to dismiss his meteoric rise as a product of luck.

“It was apparent from the minute he walked in the door that we were dealing with an extraordinary gift,” says Georgine Resick, head of the voice program at Notre Dame. “He had musical skills way beyond most of our undergraduate singers. The extraordinary beauty of the voice was there.”

Growing up in Chicago, then South Bend — his father, R. Scott Appleby ’78, is a Notre Dame history professor and director of the Kroc Institute for International Peace Studies — Appleby’s path hardly seemed preordained. Voice lessons didn’t happen until high school, when he sang the title role in a summertime production of Joseph and the Amazing Technicolor Dreamcoat. Even when he started voice lessons with Walter Ginter, then a vocal music professor at Notre Dame, Appleby wanted to study show tunes. But Ginter taught him classical repertoire — Italian song and German lieder — written for a baritone, so Appleby’s natural tenor voice had some growing room.

“The thing that was amazing about Paul — he was so intelligent and also so very interested in the text of the music,” Ginter says. “He was a joy to teach.”

In Appleby’s junior year at Notre Dame, he started studying with John Riley-Schofield, a Yorkshireman and visiting professor who instantly bonded with the young baritone. “He was a very big soul,” Appleby says of his now-deceased professor. “He was a great teacher for me. He helped me immensely.”

Resick says Appleby is the only undergraduate who sang a leading opera role each year at Notre Dame. “He had some extraordinarily difficult assignments for an undergraduate” — Papageno in Mozart’s classic Die Zauberflöte, rebellious John Sorel in Gian Carlo Menotti’s The Consul, the unnamed husband in Francois Poulenc’s surrealist comic opera Les mamelles de Tirésias — “and came through with flying colors in all of them.”

Appleby wasn’t even going to apply to Juilliard. “I certainly had a long way to go in terms of just vocal technique,” he admits. He made an impression anyway: Brian Zeger, executive director of the Lindemann Program, still remembers watching Appleby’s audition.

“What’s remarkable about Paul is that he’s such a strong musician and he’s such a strong actor at the same time,” says Zeger, who accompanied Appleby on The Juilliard Sessions, a 2012 EMI album. “He is one of those unusually self-critical people who always seems to have a very good barometer of where he is and what the next step will be for him.”

Such self-criticism, especially in rehearsal, distinguishes Appleby in the stratosphere of world-class opera. If his stomach is butterfly-free at show time (and it usually is), it’s because he throws himself into each piece long before curtain call.

“At Notre Dame I learned how to be self-critical in a productive way,” he says. “At the bottom of it, you’re going out there at a place like Juilliard and you’re saying ‘Here am I.’ You’re opening yourself up to criticism and judgment, and that’s what the nature of the educational path is here.”

Even if Appleby was genuinely surprised to get into Juilliard, he had a base of musical and artistic training that helped him adjust quickly. Less surprised? His teachers, who cast him in Juilliard productions as soon as he arrived.

“We started throwing really difficult assignments at him right in his first year here, which is pretty unusual for us,” says Zeger, who is also Juilliard’s artistic director of vocal arts. “I felt he was so capable and so eager to embrace difficult challenges that we threw him in the deep end of the pool.”

Of course, Appleby had moments of doubt. He still does. But his wife, Jacqueline Schmidt ’01, ’03M.A., who describes herself as both Appleby’s chief critic and his biggest fan, credits him with a wonder for music that counterbalances his innate self-criticism.

That’s why Appleby also distinguishes himself in song recitals, where every new piece is a discovery. “It’s just you, a pianist and a room full of people,” he says. “You have to, with those very limited means, paint music in a very intimate way and make it relatable, despite the fact that you’re singing songs [the audience] probably hasn’t heard before, in a language people don’t understand. Then you have to cultivate a persona that is more like Bruce Springsteen.”

Marlena Malas, Appleby’s teacher at Juilliard, likewise says Appleby is a voracious learner who adeptly adjusts to musical climates. “His intellect is enormous, and his desire to sing and communicate is a God-given talent,” says Malas, who has sculpted voices at Juilliard for decades. “He has all the components to have a major career.”

His performances span the spectrum: Two Boys, set in Internet-chat-room-era 2001; the Baroque pastiche The Enchanted Island at the Met; Tom Waits’ “The Day After Tomorrow” on A Prairie Home Companion. He even sang Springsteen’s “Fire” in a classical recital once. His eclecticism, a product of his refreshing refusal to take himself too seriously, is part of his charm. “Whether it’s pop or classical or jazz, he enjoys it,” Malas says. “And because he does, we all do.”

That includes the critics. After Two Boys premiered, the New York Post’s James Jorden said, “Appleby turned in a star-making performance . . . his Mozartian tenor ringing out with anguished authority.” Justin Davidson of New York magazine wrote, “Appleby is a marvel: an intelligent young singer equipped with the elegance and expressivity of an old pro, impersonating a lost soul of a kid.”

The marvel demurs. “As gratifying as that moment was — I’m proud of being in this production and glad it was such a success — I try to keep myself focused and on point,” he says, his tone all business. “I try to enjoy the moment but also stay loyal to my responsibilities as a performer.”

About those responsibilities: In the 2013-14 season, he has performances with opera companies in Toronto, Frankfurt and Washington D.C., plus song recitals in Carnegie Hall and the Kennedy Center. Such a peripatetic life can take a toll on his voice, and traveling opera singers often struggle with such rootlessness. He’s obviously in the right business, though, because that balance between his aspirations and his family is what Appleby finds “really invigorating.”

As for that banner in Lincoln Center? It was removed after Two Boys wrapped. Appleby points out the inherent parable of stardom there, of grandiosity and transformation and fame, and he dismisses it with humor. No time for stardom. There are operas to rehearse and recitals to plan. And maybe even some Springsteen songs along the way.