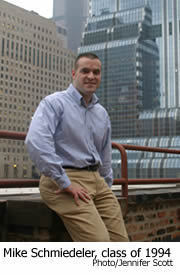 Like any good adventure, Mike Schmiedeler’s odyssey to Russia began with a bit of danger.

“I was standing in [the Moscow airport] holding room in my underwear with $16,000 strapped to my shins,” says Schmiedeler ’94, vice president of production with Towers Productions in Chicago.

On location to produce a documentary for The History Channel about the nonfiction bestseller Blind Man’s Bluff: The Untold Story of American Submarine Espionage, Schmiedeler and a colleague traveled to Russia in summer 2000 to interview former KGB agents and high-ranking military officials from the Cold War era.

Estimating a budget of $21,000 for the two-week stay in Moscow and Saint Petersburg, Schmiedeler and senior producer Tresha Mabile hid the money—mostly in 20s and singles—on their bodies and attempted to pass through customs unnoticed. While Mabile slipped through, Schmiedeler was whisked away by a customs official.

“I was honest,” says Schmiedeler. “When he asked me if I had any money on me, I told him what I had.”

Ordered to “strip and show me the money,” Schmiedeler removed his baggy pants. To his surprise, the agent wrote him a receipt for the cash and stamped it. Schmiedeler went on his way with the money to pay translators, cameramen, drivers and others.

Rather than being frightened, Schmiedeler saw the incident as a “fun and exciting” way to begin his experience in Russia. That 14-day journey brought him into contact with some of the country’s most politically connected people, both past and present. An avid reader of historical thrillers and spy novels, and a devotee of The History Channel, Schmiedeler calls the trip to Russia one of the highlights of his career as a producer thus far.

Schmiedeler took a job as producer at Towers in 1999 after spending five years with Golden Dome Productions in South Bend. At Golden Dome, he worked primarily on Today’s Life Choices, an award-winning PBS documentary series that focused on topics related to ethics, international relations and religion. Schmiedeler credits his current success to the hands-on experience he received there.

“We were short-staffed, so I got the opportunity to do everything—interviews, editing, camera work, graphics,” says Schmiedeler, who recalls interviews with then-Chilean President Eduardo Frei at the presidential palace in Santiago and then-mayor Rudy Giuliani in New York as particularly memorable experiences. “I was taught by top-shelf people. This helped make me a better producer.”

The 34-year-old Schmiedeler has had the chance to evolve professionally in Chicago’s larger and more diverse market. He started as an associate producer on American Justice and Investigative Reports for A&E in 1999. One of his early assignments, still among his favorites, was his three-day stint with a bounty hunter named Gary Cooper in rural Georgia.

Schmiedeler and a cameraman arrived in Thomasville, Georgia, to film Cooper tracking down a local perpetrator for an A&E documentary on bounty hunters. From the sound of Cooper on the phone, Schmiedeler expected a Wild West sort of fellow.

“The guy kept a 4-foot-long snake in his office and then carried it out [on hunts] in a burlap sack,” Schmiedeler recalls, laughing. “I thought he was going to be a big, tough guy.”

Turns out Cooper was just a “sweet, gentle guy in his late 40s in khaki pants and a straw hat” who was more interested in helping the hunted than in locking them up, Schmiedeler recalls. During the three-day shoot, Cooper, the cameraman and one of Cooper’s “henchmen” chased a perpetrator on foot while Schmiedeler gunned his rented van and pursued along the railroad tracks. The team ultimately lost the perp when he disappeared into the woods. Though disappointed, Schmiedeler says he was able to pull the documentary off in the end using action footage from another hunt in New York City.

Experiences such as this one keep his job lively. “That’s the best part of this job,” says Schmiedeler. “It can take you places and give you access to people you never thought you’d have.”

Schmiedeler aspired to get into television production work since his high school years in Mishawaka, Indiana. He was drawn to documentaries, which would allow him time to tell the story. “It’s all about the story,” he says. “My personal mission is to tell the most interesting, true, provocative story there is.”

His pieces have run the gamut from Extreme Winter Weather, an hour-long special on The Weather Channel, to a two-hour show called Unconventional Warfare for The History Channel. Since he was promoted to vice president of production in 2003, he travels less and no longer works on just one show. Now he oversees all of the shows that Towers produces and handles budget, personnel and purchasing decisions.

“This is where my business background comes in,” says Schmiedeler, who double majored in marketing and COTH (Communications and Theatre) at Notre Dame. “Anyone can do a story, but to do it within the confines of a budget, well, that’s tougher.”

Colleague Tresha Mabile, who has worked with Schmiedeler for six years and who accompanied him on the journey to Russia in 2000, says, “He really understands what people need, based on their egos and abilities, in order to get the best out of them.” Mabile remembers Schmiedeler traveling throughout Russia with a backpack filled with Power Bars, dollar bills and trinkets for the children—something she hadn’t even considered. “He’s always prepared.”

Towers Productions, located in Chicago’s West Loop district, produces documentaries and series for A&E, The History Channel, National Geographic and Discovery, among other networks. The company roster includes about 100 full-time workers and 40 freelancers. Among the employees are nine Notre Dame alumni. Schmiedeler says he actively recruits Domers, particularly those from the school’s Film, Television and Theatre department, an outgrowth of the former COTH discipline.

“They have a well-rounded education and they bring critical thinking skills as well as editing and shooting experience with them. That’s huge,” he says.

Schmiedeler, who lives with his wife, Wendy (Holthaus) Schmiedeler ’94, and their two young sons in Oak Park, Illinois, does have some advice for those aspiring to break into the industry.

“Be willing to take a job with very low responsibility and to work incredibly hard,” he says. “Just know that the work will be appreciated in the long run. If you’re good and you’re hard-working, you can move up really fast in this industry.”

Ruth Keyso-Vail is a freelance writer and photographer and the author of Women of Okinawa: Nine Voices from a Garrison Island.