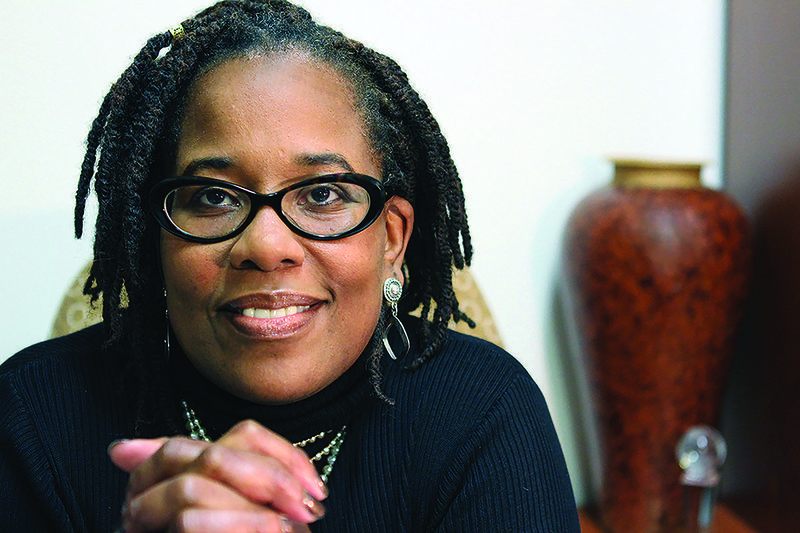 Karsonya (Kaye) Wise Whitehead ’93M.A. is an associate professor of communications, African and African American studies at Loyola University Maryland, and founding director of the school’s Karson Institute for Race, Peace & Social Justice. Also an author, a radio talk-show host and a documentary filmmaker, she discusses how she augmented her academic work with activism, amplifying her voice on issues of race, class and gender.

You refer to yourself as #blackmommyactivist. How does that hashtag express who you are?

It was something I used to joke about when I was pregnant with my oldest son. I was thinking about the ways in which I wanted to raise my children to have the fire of Angela Davis, the tenacity of Dr. King, the ability to set the world on fire with their words like James Baldwin, the passion of Fannie Lou Hamer, the voice of Ida B. Wells. I want to be the mommy activist, raising my children up to change the world. It was a joke that we used to have, my husband and I, when we talked about raising our son. It became something else after the death of Trayvon Martin, when I realized that my work in the archives, researching and studying Black women’s history from the 19th century, wasn’t going to help carve out the type of world where my sons can get home safely.

I wanted to be more outward facing, because I understood that, in the academy, I write a book and maybe six people — four of which will be family members and my mom, right? — will read this academic book on Black history. And so that’s when I became a public intellectual, started doing more radio, made myself available for television. Along the same time that we were engaging with social media, with Facebook or Twitter, that’s when [#blackmommyactivist] became my moniker, became my raison d’être.

You’ve talked about your ancestors choosing to survive, even though they didn’t know if freedom would ever come. How is the perseverance from that time relevant today?

It’s that kind of spirit that helps me to keep going. These are very frustrating times. They’re very difficult times. I have to remind myself that they’re not new times, that I come from a long line of people who chose to survive, and that survival is my instinct. It feels overwhelming, particularly when I look at the landscape of how COVID-19 is squarely meeting Black Lives Matter within the ongoing epidemics of poverty and redlining and systemic inequality and social injustice that we are suffering on so many levels. I no longer have too much hope that the world I would like to see is going to happen in my lifetime, but I have hope like my grandmother did. She said when she fought, when she marched, when she tried to vote, she wasn’t doing it for her children. She was doing it for me, for the children of her children.

In terms of turning points in history, how important is the Black Lives Matter movement?

Black Lives Matter stands on the shoulders of all of the movements around social justice that have happened in this country.

We came through the modern civil rights movement in ’54 up to ’72. And before that the abolitionist movement. So this country has a long history of movements for change. And we can go back to the Revolutionary War. Frederick Douglass said that power never concedes without a demand, without a struggle; it never has, and it never will. Every fundamental change that we have had in this country where policy has shifted, laws have shifted . . . every single time that it’s happened, it’s because people were willing to put their bodies on the line, whether that means getting beaten, getting arrested or in some cases getting killed. . . . What is different about this movement, I would argue, when we talk about racial justice, is that it is happening during a global pandemic.

People cannot look away. When the video surfaced of the murder of George Floyd, everybody was home, and not just in this country, but on the planet. So that’s why Black Lives Matter picked up steam in Canada, Europe, Asia, because the whole world was watching. I think what’s concerning, and what gives me pause is that, as the country works to reopen, and as we’re watching the COVID-19 numbers rise to just astronomical levels, that people are starting to look away again from Black Lives Matter.

Thinking about the long term, how will we know if the movement was successful?

I ask myself that question a lot. Is victory that we don’t have any more unarmed black men, women and children being killed in the street? Is that what victory looks like? Because that should be the base level. The victory that we get rid of poverty? Well, that’s going to take a long time. The victory that we actually transform the schools? These are huge issues that we’re struggling with.

I would argue that a better question is, what does justice look like in this country? What would that look like? Because, if we can talk about that, then we can talk about what we can do to bring about justice in all of the areas where there’s injustice.

Interview by Tom Kertscher, a Milwaukee freelance reporter whose work was featured in the Netflix series, Making a Murderer. Follow him at TomKertscher.com.