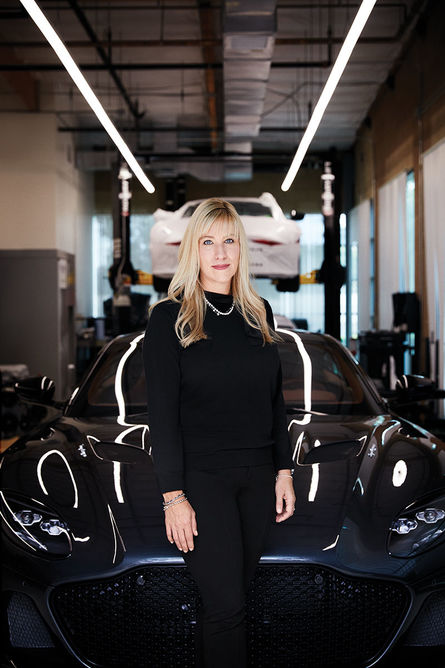 What does your job entail?

This position encompasses everything from marketing, sales, network strategy, profitability [and] managing a team [to] working with a dealer network. I started as a contractor in the automotive business and sort of worked my way up, and I still carry that with me. I will do everything from cleaning out things to speaking to hundreds of people at a women’s leadership summit.

You studied Spanish and government at Notre Dame and law at the University of Kentucky. How did you end up working in the car industry?

When I got to Notre Dame, I was like a lot of 18-year-olds who don’t know what they want to do. When I graduated I still felt a little bit like when I started. In my first year at law school I thought, “Maybe this isn’t for me.” I graduated and tried practicing. I had some friends in California, so I asked them if I could use their address to apply for jobs. The leap to automotive was literally just knocking on doors. I walked into this little tiny start-up company. They asked if I knew much about what they did and I said, “No.” They said, “We are an automotive company and we sell cars online.” This was in the late ’90s — nobody knew anything about the internet.

What were the biggest hurdles in your career?

I left the start-up when I got a job at Land Rover. Fortunately I had a skill set in internet. I learned how to code, how to build banner ads. [But] because I didn’t have a business degree, I wasn’t an Excel spreadsheet expert. So in my free time I took an Excel class. As time went on, part of it was being a woman. I was told, “We’re not sure if you’re tough enough or if you can have these difficult conversations; you smile too much.” The hard part was that there were no other women to look to as role models. I was looking for someone to emulate their behavior. What am I supposed to look like? How do you present yourself at a board meeting? Now when I look at it I guess it was kind of good because I created my own style and forged my own path.

You’ve called this a “pivotal moment in time for women.” As Aston Martin’s first female president, what part do you see yourself playing in that moment?

I think it’s been an amazing year for women to really express themselves. If my being in this role has inspired women to say, “I can do that as well,” then that feels pretty special to me.

You became a parent in your first year at Aston Martin. Has it changed your perspective on your life and job?

It has. I [first] moved from England to the United States without my husband. He came to see me and I got pregnant. When I had to call our CEO and tell him five weeks after I took the job, my immediate reaction was, “They are going to be disappointed in me.” Now I think I have a different perspective on helping people balance their work life and their home life — if there’s ever such a thing. Knowing that every day I go to work I may be paving a path for [my daughter’s] future by maybe breaking through some barrier, it now feels more meaningful than it ever did.

Interview by Jessica Donath, a freelance journalist in Los Angeles.