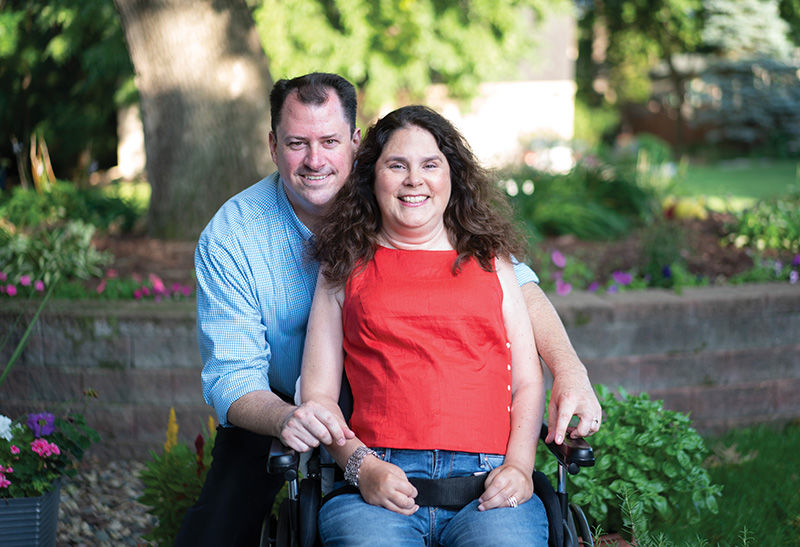 For three weeks before Labor Day, some of the busiest of the year for Mandy Abdo Sheahan ’96, she’ll go to bed each night exhausted and, most likely, smelling of bacon.

Sheahan and her cousin run the Big Fat Bacon stand at the Minnesota State Fair, a 12-day festival that draws more than 1 million people each year. From a wheelchair, Sheahan commands a cohort of teenagers who bake, grill and season the thick-cut strips of meat. She lost the use of her arms and legs when she was a passenger in a car accident during her senior year at Notre Dame.

Here Sheahan reflects on her experience in the aftermath of that tragic incident and her work with her family’s variety of entrepreneurial food ventures:

How would you describe the state fair for someone who’s not from Minnesota?

Here’s the thing: If you’re not from Minnesota, you don’t get it. My freshman year at Notre Dame, it was the first time I’d missed the state fair since I was born, I think. I was so homesick, and I couldn’t believe I was missing it. My new friends and roommates thought I was nuts. And my friend from home sent me a care package from the fair — which was inedible, of course, because it had been in the mail for like three days. I ended up going home Labor Day weekend that first year to be at the fair. Because you can’t miss the fair.

Tons. Lots of bacon. More bacon than you’ve ever seen.

You’ve run a Minneapolis restaurant, and now you coordinate a food truck for MyBurger, your brother’s company. How did you get into this industry?

I wanted to do something with the family business, but I didn’t know what it was going to be. My parents have been entrepreneurs their whole lives. They’ve been at the state fair since 1977, I think, doing ice concessions, and then they had a pita bread sandwich booth. Around 2008, we decided to give a different concept a shot because we weren’t making it with healthy food. We figured nobody wants healthy food at the fair, so let’s go the opposite — bacon.

What were the circumstances of the car accident you were in while at Notre Dame?

It was November my senior year, and it had been raining all day. It got cold, because you know how November gets in South Bend. We went to the movie Get Shorty — I hated the movie — and when we got out the roads had turned to ice. And we slid into oncoming traffic and into another car.

I remember sliding into traffic. And then I lost, like, three days. I was in South Bend over Thanksgiving. Then I medevaced back to Abbott in Minnesota in December and was in the hospital until the end of March. I made it to graduation in May of ’96 and officially got my diploma in May of ’97.

It was awful and it was horrible and it sucked. But Notre Dame was amazing, the community was amazing, my friends were amazing. They pooled their tips from a whole weekend at [Senior Bar] and bought me a laptop so that I could email. That’s the email address I still have. It’s AOL, but I’m never going to change it because there are still people who still contact me through that address from school, because they had it back when I was in the hospital.

What’s the biggest challenge about working at the fair?

The whole thing is challenging in terms of it’s exhausting, and you’re managing a bunch of high schoolers — who are great, but there’s stuff that they don’t know. There’s definitely a teaching element, which I love to do. I mean, I’m a tutor and the oldest of four. This is what I’m used to, and I love it. You can be so, so exhausted, but it’s also so much fun.

Interview by Katie Galioto ’18, a reporter for the Star-Tribune in Minneapolis.