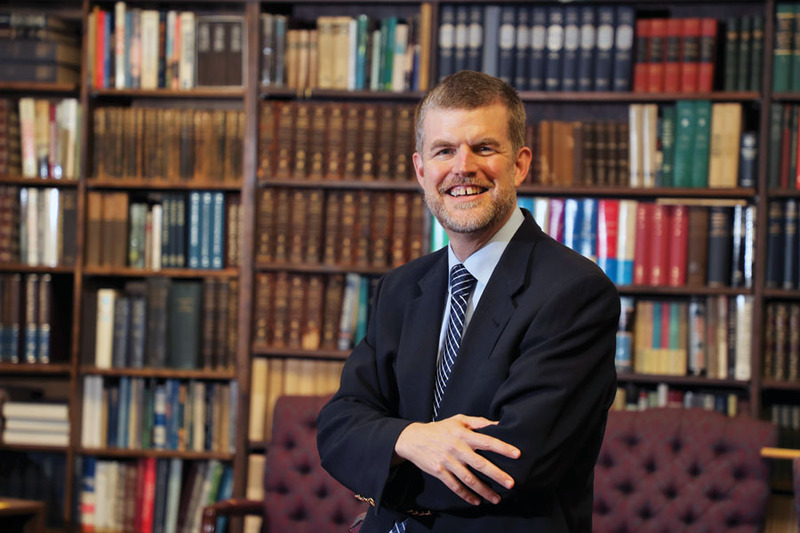 Imagine historian Thomas Kidd ’01Ph.D. with a machete. In his new book Thomas Jefferson: A Biography of Spirit and Flesh, Kidd hacks away at the third president’s unreconciled moral, theological and financial views and principles, which have made him the most controversial of the Founding Fathers.

Consider Jefferson’s head-spinning contradictions. The Virginian championed liberty and equality, yet he owned slaves — as many as 600 during his life. Though he preached frugality, especially regarding government spending, he died with crushing debts — $2.6 million in today’s dollars.

Kidd, who is also a research Fellow at Baylor University’s Institute for Studies of Religion, has written biographies of Ben Franklin and Patrick Henry as well as acclaimed works on the history of religion in America. We caught up with him on the Fourth of July weekend.

You write that “instead of . . . toppling statues, I propose that we instead should ponder the perplexing, hard truths about the American founding.” Explain.

It’s better historically to sit with people like Jefferson and try to understand him and his time. We’ll still come away believing he did awful things, including with regard to slavery and his relationship with Sally Hemings, the enslaved woman with whom he had a sexual relationship. We can also have the wisdom and maturity to understand the contradictions and not use them to tout our own virtue but be chastened by the example of Jefferson, who is so brilliant, especially in his belief in equality before God and the tradition of religious liberty, and see it’s not just that he was imperfect but that he really did terrible things. We have to live with that contradiction.

Another contradiction was his wild spending. Why did he behave that way?

Part of it comes from his sense of responsibility as a Virginia gentleman to be gracious and hospitable. He couldn’t get himself to think about the expenses attached with that. He built Monticello, tore it down to build a second, larger mansion at Monticello, and built another mansion at Poplar Forest near Lynchburg, Virginia. For him, these were experiments about physical spaces and architecture and how they could lead to greater enlightenment, but he never thought about their cost. It was devastating for him and
especially for his enslaved people, who were sold to pay his debts when he died.

What was his relationship with Sally Hemings?

It went on for decades. He owned her as a slave. At a minimum it was coercive. I don’t think we know enough to characterize the emotional quality of the relationship — was it romantic or in fear? We don’t know. At a fundamental level she was his slave, and that has an irreducible coercive quality we can’t get around.

Jefferson wrote regarding slavery that “We have the wolf by the ear, and we can neither hold him, nor safely let him go.” The Founders knew the nation had a horrific problem, but none of them could resolve it, especially Jefferson.

Yet he wrote that “I tremble for my country when I reflect that God is just.”

Jefferson was talking about slavery when he said that. It’s one of the most extraordinary things he ever wrote, because you think, “Does Jefferson believe in the judgment of God on people?” I’m not sure, but he thought if we were going to be judged by God, it would be for slavery.

He was especially proud of writing Virginia’s Statute for Establishing Religious Freedom, which only scholars remember today. What did it do?

That law disestablished the Church of England as Virginia’s official state church. It was passed in 1786 by [the Virginia General Assembly], but Jefferson wrote it. They believed it would be better to separate church and state and allow churches to function in total freedom without any state entanglement. His most enthusiastic supporters, maybe surprisingly, were evangelical Christians, especially Baptists, whom the Anglican Church persecuted on the eve of the revolution.

Yet some thought Jefferson was an atheist. Was he?

As a young man, he went through a skeptical phase in which I don’t think he considered himself a Christian. When he was president, he came to believe in a form of Unitarian Christianity. He set aside supernatural claims about Jesus being the son of God and the resurrection. He believed Jesus was the greatest moral teacher in world history. So, he considered himself a Christian but only as an ethical, naturalistic Christian.

Interview by George Spencer, a freelance writer who lives in Hillsborough, North Carolina.