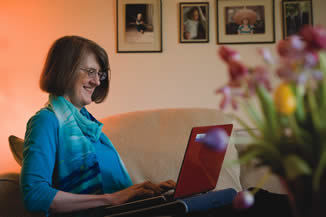 One minute his mom was a Cub Scout leader and car-pool driver. The next, she was a published romance novelist and his friends were calling him from bookstores reading racy passages before he could disconnect.

Sally Stanton MacKenzie ’76 is as surprised as anyone to see she now has eight historical romances written and has hit USA Today’s best-seller list. The books have prospered even in a bad economy for publishing.

“Think of me as a Catholic mother of four boys, and that gives you a better sense of me than the books I write,” says MacKenzie, a trim 58-year-old with a bob of thick brown hair and metal-rimmed glasses.

Meg swallowed. She felt as if she’d been kicked in the stomach, but Emma was right. Her behavior had been shocking. Completely scandalous.

So how did a Rockville, Maryland, housewife who had never had a boyfriend before meeting her husband end up writing tales of scandal, sex and relationships in early 1800s England?

MacKenzie grew up in suburban Washington, D.C., the daughter of a homemaker and a congressional lawyer, and began reading Regency romances in middle school. Regencies — one of the most popular versions of romance novels — are set in the English period when the man who would become King George IV was governing as regent for his crazy father King George III.

The genre was so ingrained for her after all those hours curled up with paperbacks that she would accidently drop words from that era into conversations.

“I want no part of all the social torture. Can you see me standing in some stupid ballroom? I’d die of boredom listening to all those fat-pated frumps prose on and on about other society nodcocks.”

The novelty of being one of just 325 female undergrads was more overwhelming than exciting to her.

“I wasn’t there to co-educate the place. I just wanted to go to school,” she says.

She worked her way up to become the first female editor of the literary magazine Scholastic. Kurt Vonnegut and some of the other reading material from her English classes left her worried that writing needed to be fraught with meaning. “I thought, ‘I can’t be a writer because I can’t type and I didn’t have a terrible childhood,’” says MacKenzie.

“What was an English major going to do? You can’t just sign up to be a novelist.”

She met her husband in the sort of thrown-together stroke of luck her characters might encounter. But instead of being seated together at a duke’s grand party, she shared a kitchen and a dinner table with him in student housing.

After a year and a half of law school, she surprised some of her friends by dropping out. Loretta Castaldi ’76, her Notre Dame dorm-mate, says MacKenzie was so goal-oriented she usually finished what she set out to do. But with law school, “She had the strength of character to realize this wasn’t what she wanted to do,” says Castaldi, an education industry professional in Washington, D.C.

MacKenzie didn’t see the point of having two lawyers in the family when she wanted to raise kids, admitting she was something of a “throwback to the 1950s” while her friends were off making their careers.

Soon she was writing. Writing regulations that appeared not in a bookstore but in the deadly serious Federal Register. MacKenzie enjoyed the puzzle-like nature of fitting new regulations into old ones for the U.S. Department of Agriculture. She got her first 15 minutes of fame by writing a regulation declaring ketchup a vegetable — for school lunch purposes. The rule earned President Reagan years of abuse on the comedy circuit.

Four boys arrived within seven years. (Mike is the youngest at 22.) As they got involved in swimming, she was soon writing regulations again — this time as a swim team volunteer. She says with a smile that her swim-team manual is her real best-seller.

Lord Manders chose this moment to let out a very ominous noise. The sound did not emanate from his mouth.

Meg wrinkled her nose and looked down in horror at the smelly little creature sitting on one of her favorite dresses. The creature grinned back.

“Those are my sentiments exactly, Bobby,” Lizzie said, picking up her son. “Auntie Meg is indeed full of . . .”

Lizzie rolled her eyes and went to change her baby.

One of her close friends, Mary Jean Schmitt ’81, says MacKenzie truly prized the everyday work of raising children, whether it was writing those swim-team regulations or heading out of town for a big meet. She helped others understand that value too, says Schmitt, who lives near her friend and works in technology sales.

MacKenzie made people feel the volunteer work was “as important as writing a novel,” Schmitt says. “That’s one reason I really value her friendship.”

MacKenzie wrote school newsletters, regulations and even some children’s picture books she never sold. Then she had the sort of epiphany her characters might have from seeing a suitor in a new light. Just as MacKenzie’s eldest was heading off to college, a friend asked her to pen an essay on family that got her thinking about writing.

“I thought, ‘This is one of the things I wanted to do when I grow up. Now I’m grown up. Pretty soon I wouldn’t need to run kids around.’” 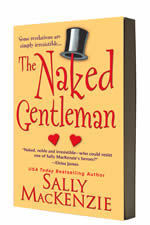 She figured she would write what she liked to read — Regencies. Her first book was a finalist in a contest in 2005, and one of the judges called and offered her a contract. The Naked Duke was the first of the seven Naked books — followed by other disrobed nobility like earls and barons. The Naked King was rated one of the top 10 romances of 2011 by the American Library Association.

J. Robert Baker ’76, a fellow English major and now professor, got the first opportunity to read her book when she asked for a critique of her draft. Baker, chairman of the Department of Language and Literature at Fairmont State University in West Virginia, doesn’t usually read romance novels. But he loved that the book didn’t take itself too seriously. “I thought it was a romp.”

The mark of good fiction in any genre, he points out, is sparkling dialogue. MacKenzie has the diction down and a liveliness to her dialogue that is like real speech, he says.

“It’s amazing a Notre Dame grad can make so much money off of naked men,” he jokes.

“Well, the younger men were equally revolting. Cabbage heads all of them — and that’s insulting the cabbage.”

The Naked series features a set of interconnected characters sorting through the strict social mores of the era, the vicissitudes of fortune and love. They have more “heat”— as MacKenzie puts it — than the beloved Georgette Heyer books she grew up on.

Writing the sex scenes is a natural part of the process of describing the “emotional growth” of her characters. She compares it to her studio art class at Notre Dame, where her main concern with the naked man posing at the front of the room was how to portray him in three dimensions.

Writers don’t need to have experienced rape or murder or other things they are writing about, she points out. Just be able to imagine it.

MacKenzie works hard to bring humor into the books — situational humor, word play and repartee between her characters. The first book in her new series, Bedding Lord Ned, which was released last month from Kensington Zebra, is about the Valentine family, whose members were all born on Feb. 14. It’s a trick not to push the humor too far, she says.

Schmitt says the humor is in keeping with her friend’s own personality — an intellectual with a fun streak.

“Her humor in her books is so spot on,” says her agent, Jessica Faust. “It makes me laugh out loud.”

“I have yet to extend my condolences on the death of your father last year. I am so sorry for his passing. Was he sick long?”

“No, not sick at all. Hunting accident, don’t you know. Horse refused a fence. Pater went flying. Landed on his head. Broke his neck. Nothing to be done about it.”

“What a tragedy. Hunting is such a dangerous sport.”

“What?” Lord Frampton examined her as if she had suddenly sprouted a second head. “Not dangerous. Bad luck. He’d have been up on his horse in a trice if he hadn’t been dead.”

Faust bristles at the knocks against romance authors and readers. The readers are mostly educated women, she says, who “just want to be swept away by a book.”

After writing a book a year since her first came out in 2005, MacKenzie says her publisher wants her to step up the pace, which will cut into the time she uses between books to recharge her writing batteries and market her latest publication. Historical romance fans are voracious readers — a small miracle in an era of 140-character reading habits.

On a simple wood coffee table in her home, MacKenzie spreads out her books that have been translated into Czech, Russian, Spanish, Norwegian and Portuguese. Some covers are racier than others. One even has a downright comical long-haired shirtless man in period-inappropriate blue jeans.

Her books have sold about half a million print copies. And opened a new world for her.

She started her new career as a naïve traveler who actually asked for a nonsmoking seat on her first flight to a conference, unaware that smoking on planes had long been banned. Now she regularly travels to conferences to hang out with author friends from around the world and promote her books.

That’s a stretch for someone who considers herself an introvert. Friends describe her as a sensitive, warm person who is eager to help others, grounded and dedicated to being good at and finding value in whatever she does.

MacKenzie cringes a little at the fact her youngest son called her work “trashy novels” in his college essay. But she appreciates that he has inherited some of her humor — and that he got in to every school where he applied using his essay about her. She figures there’s at least a touch of pride mixed in with his mortification.

“I turned 50 and I had the empty nest coming on, and here I have this whole new thing,” she says.