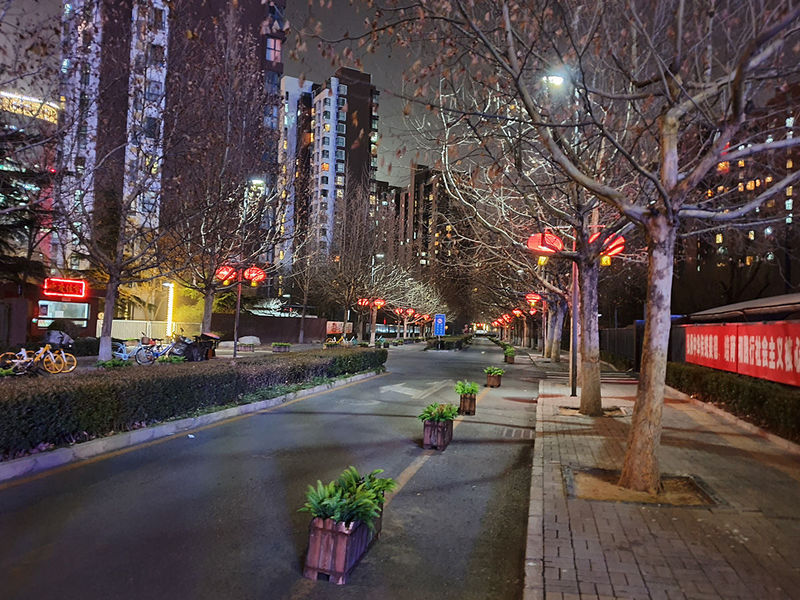 Major events in the U.S. today are starting to have the feel of this empty Beijing street, decorated for the Lunar New Year in January. Photo by Victoria Erdel ’19

A U.S. border patrol agent in Dallas motioned for me to remove my mask. “Where you flying in from?” he asked.

“Korea.” I hesitated. “Well, actually I started in China.”

“China,” he said, shuffling through my passport too quickly to read it. “What were you doing there?”

He chuckled. “Are you sure you want to be doing that over there right now?”

“Well, that’s why they sent me back.”

He laughed again and waved me through.

Later, I watched a man across the aisle settle in for our flight from Dallas to South Bend. He positioned his briefcase squarely under the seat in front of him, secured a travel pillow around his neck and dug his right shoulder into the seat backing. He likely would have fallen asleep had he not spotted me wearing a face mask and sitting fewer than three feet away. His drooping eyelids darted open. He scooped up his belongings and moved to an open seat several rows back.

Another man to my right was already trapped in the window seat, so throughout the two-hour flight, he could only bounce his leg, sigh, lean against the wall and glare at me out of the corner of his eye.

This was the final leg of my journey to my parents’ home in Mishawaka, Indiana.

I was returning from Beijing less than two weeks after COVID-19, the disease caused by the coronavirus, rose to international prominence.

Though there were only 12 days between my initial awareness of the virus and my return to the U.S., those few days were filled with skyrocketing infection rates and government-imposed preventative measures. One of the first instructions was to wear a mask in public, especially in taxis and on the subway. Then came the temperature checks. Before passing through standard subway security, a guard in a hazmat suit pointed a thermometer scanner at our foreheads, forbidding anyone with a temperature above 37.3°C (99°F) to board.

At the same time, local closures and cancelations extended beyond the Lunar New Year holiday. The Beijing Municipal Education Commission (BMEC) indefinitely postponed the next semester. My language school sent me an official notice on January 26 to leave and not come back until the BMEC determined a new start date. Returning to Beijing before then could result in a withdrawal of scholarships, expulsion and other undisclosed disciplinary actions.

So I did what I could to prepare for my return. Masks were a must. I had only two single-use masks and most stores had long sold out, so I spent one of my last days in Beijing walking nearly eight miles to comb through six different places. Three hours into the hunt, I found the reusable fabric mask that I wore on my flight to South Bend. It was one of only five masks left in that mall, so I left the remainder for other hunters.

Two days later, my masks, hand sanitizer, wipes and I taxied through barren metropolitan streets to the airport. Departure was fairly routine, except that everyone wore masks and we completed health questionnaires. Had I been to Wuhan in the past 14 days? No. Had I been in a Chinese hospital in the past 14 days? Also no. My group of travelers handed our forms to an airport employee, who allowed us to continue without first checking our responses.

There weren’t additional health questionnaires or temperature checks during my layover in Seoul, South Korea, even though I was told to expect them by Arirang News. And when I arrived in Dallas, my border patrol officer was even less concerned by my travel history. But when the two men on my flight to South Bend clearly expressed their discomfort with my presence, I began to wonder. Did the border patrol officer underreact, or did my fellow passengers overreact?

Now as the virus spreads throughout America, I see the same dichotomy of reactions circulating. There are those who explain the coronavirus away as little worse than a common cold, some sharing viral memes about the pandemic rather than helpful infographics and others who preach and prepare for doomsday.

I’m no epidemiologist, but as more American airports implement stricter health screenings, schools switch to online learning, authorities postpone or cancel large events and stores sell out of hygienic supplies, I think I might have left one viral hotbed only to enter another.