The real world, it turns out, does not have semesters.

My four years at Notre Dame felt at times like a series of sprints — from classes to extracurriculars to career fairs — but those were at least broken up by the academic calendar. In college, you’re told when to stop: for a week in the fall, a month at Christmas, a week in the spring, and if you’re lucky, a couple of internship-free months (or weeks) in the summer.

I started my first job in the “real world” last July, and I quickly learned that corporate America doesn’t come with these tidy breaks. In my first seven months on the job, I worked every day except for Thanksgiving and Christmas — not necessarily on purpose, but because I wasn’t quite sure when it was okay to stop.

And then I decided to take a stretch break in Colombia. 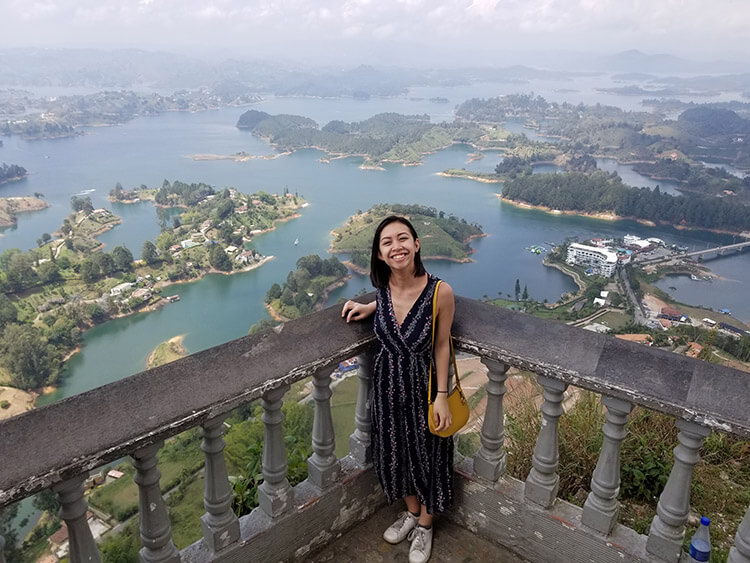 The decision to visit Medellin was nothing less than spontaneous, and my reasons for going were broad: I had taken Spanish classes in college and missed the language. I’d never been to South America. I’d never had a “real” empanada.

The night before my flight, I felt an unfamiliar flutter in my stomach. I had taken solo trips before, but to places I had already been to, familiar territory that merited a second visit. This time, I was going to a whole new country — a whole new continent — completely alone.

I felt small, like the world was about to swallow me whole.

For the first few days, I explored Medellin without a plan, in a style more akin to a “choose your own adventure” story. On a walking tour of the city on my first day, I met Orla. Orla was in the midst of a year-long break from her job in London, a leave she’d taken for the sole purpose of traveling South America. Every day was a “choose your own adventure” story for her, never knowing how long she would be in one place or what country she would visit next.

I was in Colombia for six days, and as she meandered around the continent, Orla couldn’t understand why I thought it was worth it to take such a short international vacation. But I saw six days as a luxury. I couldn’t fathom the idea of not having a home base for a year, whereas she, three months in, was already dreading the end of her nomadic lifestyle.

She could never live in America, she said. People there are always on the go, living to work instead of working to live.

When Orla jetted off to Ecuador a few days later, I was left once again with the feeling of the world swallowing me up. I decided to get out of the city and into the mountains that surrounded Medellin, and booked a day trip to a coffee farm.

The farm was a three-hour drive up a mountain on a narrow, curvy road. Several people in our group fell ill — most from motion sickness, and I, uniquely, from the elevation — while, through it all, our bus driver executed turn after hairpin turn, never slowing down at the curves. I eventually began to question if this was fearlessness or a general acceptance of the steep fall that lay below us. I decided it had to be both.

The elevation sickness and the feeling of being tossed around like a rag doll were, in the end, worth it — the farm was beautiful. We stayed with the local family that lived on and ran the farm, and it hit me that I had never met people who were so hospitable without any prior relationship or basis of trust. They taught us how to pick coffee beans, showed us the drying and roasting process and even cooked us lunch.

We went on a hike around the mountains surrounding the farm, and afterwards the wife of one of the farmers greeted us with glasses of lemonade infused with coffee.

This was one my most vivid memories of Colombia, because it was my favorite kind of travel experience: overwhelmingly bittersweet. On the one hand, it was giddily new and unexpected, from the flavor of the drink to the far-flung location, which I could only describe as some mountaintop in remote South America. On the other, though, it was fleeting. I knew I would likely never replicate this exact scene again, and, in a life oriented around routine, I suddenly grew attached to this moment that I could already feel was becoming a memory.

How badly in that moment did I want to make this a part of my every day: to have a glass of coffee-tinged lemonade greeting me after my sweltering subway commute to downtown Manhattan, to catch a glimpse of unintentionally grown greenery, before I retreated to a corporate cave of fluorescence and concrete.

Before we headed back to Medellin, we said goodbye to the farmers and lingered for a bit, making conversation to delay our return to the rollicking bus. One man asked me where I lived, and when I said New York his eyes lit up.

I laughed, surprising myself. I think it was the juxtaposition of being in the middle of nowhere, somewhere high in the mountains in Colombia, with the word “Connecticut” that struck me as strange. But it gave me an unexpected comfort, hearing the name of something so familiar in an unfamiliar place — I liked thinking that, somewhere in Connecticut, someone knew of this secret little coffee farm in the Andes.

The world loosened its grip just a little bit. 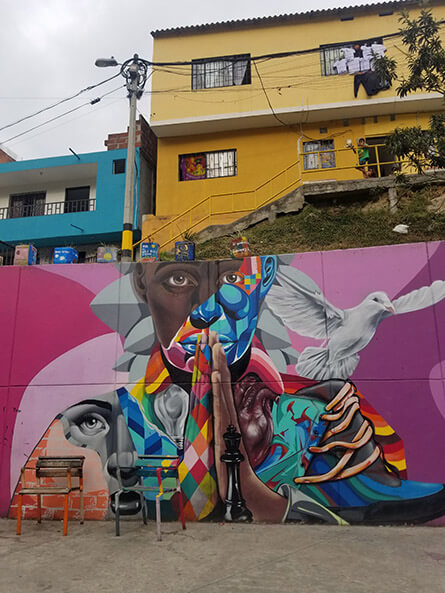 Our tour guide, Doc, was a graffiti artist and resident of Comuna 13. As he took us around the district, we stopped at a slide that was built to memorialize a child killed by a stray bullet here years ago. Doc said that the government wanted to put up a statue of the child, but residents of Comuna 13 rejected the idea.

“What would we do with a statue other than give the pigeons a place to sit?” Doc asked.

Instead, the people built a slide, a public toy that perfectly hugged the undulating curves of the mountain. Doc invited us to give it a try.

After we mini-recess, Doc pointed out the neighborhood children that had been playing on the slide for a while and still had not tired of it. They slid down forwards, backwards, with a partner, alone, and in various other creative ways. Rather than growing comfortable, he said, children tire quickly of routine, and will find new ways to do the same thing over and over again.

Since I’ve been back, I’ve tried to take different ways to work. I’ll take a different line, even if it means walking a bit further. Instead of disembarking at the closest stop to my office, I’ll get off a few stops early to get a new view for the last few blocks of my commute. I want to be more like those children on the slide.

If the real world won’t build in breaks three times a year, the responsibility to stop sprinting rests with me. I’ve grown more comfortable in recent months telling myself when to stop, and I’ve decided that the best way to do that is to always have a moment like that one on the mountain looming on the horizon. This year, I’m giving myself three chances: Los Angeles in April, Spain in August and Argentina in November.

I don’t really mind sprinting, as long as I have something to run towards.