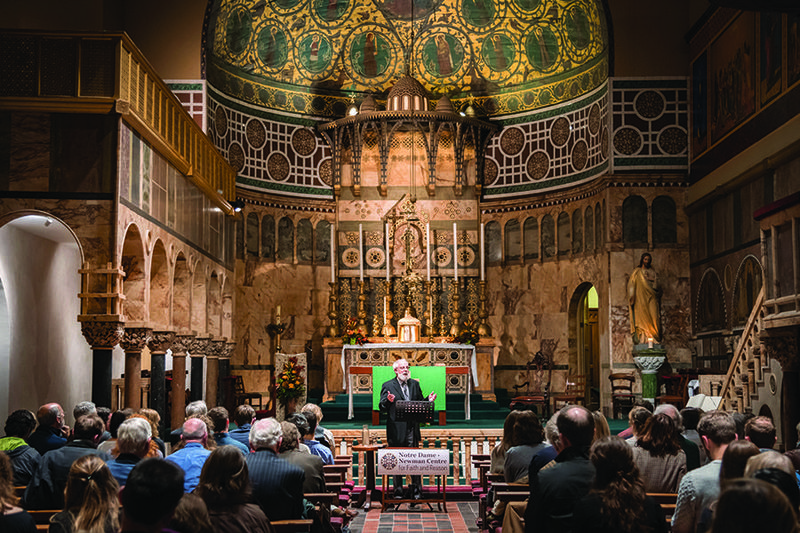 When John Henry Newman was canonized as a saint on October 13, it was reason to celebrate at Our Lady Seat of Wisdom church in Dublin. The Notre Dame-Newman Centre for Faith and Reason, located at the parish long known as Newman’s University Church, is named for the church’s founder, a 19th-century theologian and poet, Catholic convert and cardinal.

The church opened in 1856 and was originally attached to the nearby Catholic University of Ireland, and later to Harrington Street parish. In 1974, it became a separate parish church. In 2017, at the invitation of Archbishop Diarmuid Martin of Dublin, Notre Dame expanded its presence in the city by establishing a pastoral outreach at the church designed to draw in young adults.

At the center of the effort are the Rev. William Dailey, CSC, ’94, ’00M.Div., the center’s director, and Steve Warner ’80 M.A., its associate director and an expert in liturgical music. Together the two men are working to revive the urban parish.

More than 90 percent of Ireland’s Catholics reported attending Mass at least weekly in the early 1970s. Today, surveys put that percentage at between 30 and 35 percent, according to a 2018 article in America magazine. In Dublin, that figure has fallen below 20 percent, and some urban parishes report weekly attendance at less than 2 percent of the Catholic population.

Dailey and Warner have turned to music and preaching to draw back the faithful. Warner recruited young musicians attending area colleges to perform during a new Sunday evening Mass, and the effort is showing promise. That service regularly draws up to 100 people, many in their 20s and 30s, and the 24-member choir has already recorded an album of sacred music, Easter in Ireland, due out in February.

“The archbishop has a fondness for John Henry Newman and believes his legacy here in Dublin is one that the Irish Church should emphasize and embrace,” Dailey says. “And that’s part of his motive in calling us up. You don’t let a beautiful, historic church that was built by someone who’s about to be named a saint fall into disuse.”