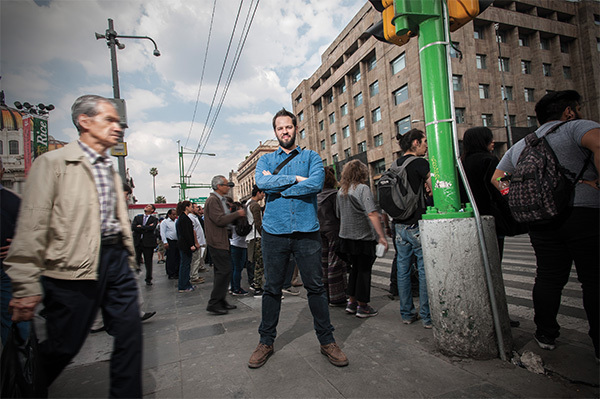 It’s known as the first line of extortion in Mexico: Try parking your car in a legally designated spot on a public street and someone waving a red cleaning rag will charge you for the space. If you refuse to pay, expect to have your car keyed — or worse.

In Mexico City, these corrupt parking attendants are connected to a citywide mafia. Because of the flannel rag, a franela, they are known as franeleros, a word that’s one of more than 300 entries in a Mexican dictionary of corruption terms compiled by Gustavo Rivera Loret de Mola ’07.

The book, Corrupcionario mexicano, is colorful and humorous, illustrated by some of Mexico’s most famous cartoonists. Despite the light touch, it has a serious purpose: to help Mexicans realize how much corruption, from paying bribes to using pirated goods or services, is entrenched in their daily lives.

What Rivera, who majored in political science and peace studies, wants his countrymen to realize is that the lexicon they have developed around corruption has normalized an unacceptable situation — the ways in which Mexicans survive in a country of weak institutions, absent the rule of law.

“The odds are stacked in favor of who has the most money and the most power,” Rivera told me when we met in a Mexico City café last summer. “And because we can’t trust the law to solve our problems, we come up with moches and mordidas.”

Both moche, a kickback, and mordida, or bribe, are among the words defined in Corrupcionario, which has sold more than 15,000 copies since 2016 and now includes an interactive website where people can add new terms. 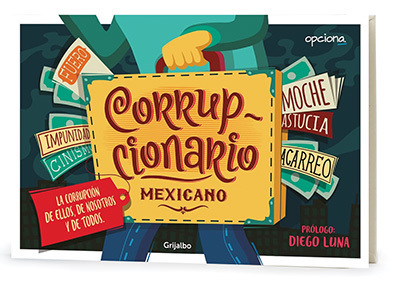 I looked up franelero because, as a 10-year resident of Mexico City, I paid the one on my street 50 pesos (about $2.75) each week just to keep him from parking cars in my driveway. My friends were outraged whenever I shared that information. Corrupcionario explains it: “Franelero: Those in charge of ‘administrating’ parking spaces in areas of heavy street traffic. Be careful. If you say no to them, something could happen to you or your vehicle.”

Rivera believes that paying these informal fees reinforces a broken system that needs thorough reform if Mexico retains any hope of becoming a functioning democracy. The issue is that fundamental and important.

“It has to do with the way Mexicans understand the meaning of the word ‘law,’” he said. “In people’s minds, politics equals corruption, and corruption equals the law.”

Rivera came up with the Corrupcionario after helping to found the nonprofit organization Opciona to work on strengthening Mexican civil society.

The son of a civil engineer and a Cuban exile, he grew up in Cuernavaca. Once a bucolic weekend getaway for Mexico City’s wealthy elite, the city is now plagued with violence. Politics was always part of the conversation in Rivera’s family, especially an anti-communist narrative against the Castro regime that had forced his mother to flee her childhood home.

Rivera’s form of adolescent rebellion was to join the local branch of the leftist Zapatista movement that championed Mexico’s poor, indigenous farmers after the 1994 North American Free Trade Agreement.

Disillusioned with Zapatista leadership, Rivera decided to join a political party when he turned 18 and was eligible to vote. After some research, he chose the conservative National Action Party.

It was there, as a campaign volunteer, that he observed the kind of corruption that directly impedes clean voting and democracy. Mexico has publicly financed elections and strict caps on private contributions and spending. Rivera observed firsthand all the ways in which candidates circumvent the laws and take money or gifts under the table.

“There is no way in Mexico you can be competitive without dirty money. . . . You cannot win an election or get to a public office without some kind of corrupt compromise,” he said. “You’re tainted from the very beginning, and it’s hard to do a good job in public office. That’s the root of corruption in Mexico.”

A fascination with Latin American politics and American football led the lifelong Dallas Cowboys fan to discover Notre Dame, and his college plans were set. After 10 years of studies in the United States, and a doctorate in government from the University of Texas in hand, Rivera returned home in 2013 with plans to work in civil society.

According to the Paris-based Organization for Economic Co-operation and Development, Mexico loses anywhere from 5 to 9 percent of its gross domestic product each year to corruption. In poll after poll, Mexicans rank it as the country’s most pressing problem, alongside crime and higher than poverty. One poll revealed that Mexicans don’t report corruption because they don’t believe it will help — and they fear the consequences of whistleblowing.

In recent years, the level of unchecked public stealing has sailed off the charts. Three former state governors have been jailed and at least half a dozen more are facing corruption investigations or charges. To cite just one example, Javier Duarte, the former governor of Veracruz, is accused of siphoning some $35 million in public money to shell companies.

Many organizations have sprung up to investigate corruption and advocate for stronger laws to define the crime and strengthen prosecution. A citizen initiative in 2016, known as Ley 3de3 — the 3 out of 3 law — established a national anti-corruption commission and independent prosecutor. But so far, Rivera says, it’s window dressing. The federal government has not yet named the special prosecutor, leaving the new system on hold.

With others hard at work on these institutional reforms, Rivera decided to address corruption’s cultural aspects, to change attitudes and get people to speak openly. He considered public service announcements, but the research said no.

“Mexicans hate to be scolded,” he said. But, “they love laughing at themselves.”

Humor was the answer.

Penguin Random House published the book. And Rivera, with the help of prominent venture capitalist and Opciona co-founder Alejandro Legorreta and Hollywood star Diego Luna, turned the book presentations into public discussions about corruption. One session at the prestigious National Autonomous University of Mexico in Mexico City drew 400 students, who complained about police corruption and the lack of investigations into sexual harassment on campus. Students approached Rivera afterward asking to volunteer.

The 33-year-old is now launching his second project: campaign finance reform. He plans a citizens’ initiative on the issue after this summer’s presidential election. He’s also serving on a new anti-corruption commission for his home state of Morelos and is a founding member of Morelos Rinde Cuentas, which roughly translates as “Morelos, Come Clean.” Created by businessman Juan Cintrón ’64, the group investigates corrupt policies and practices and proposes civic-minded solutions.

Rivera says he learned to challenge the prevailing order as an undergraduate.

“When you go to school in Mexico, you don’t learn to question,” he said. “At Notre Dame, the big culture shock for me was being encouraged to question my professors and argue on the basis of facts and evidence, but also the importance of having uncomfortable discussions about where science and facts meet faith.

“You need to have values and know what you believe, and make sure you are able to defend it.”

Which may explain Rivera’s social media hashtag for the Corrupcionario: #EmpiezaPorTi — It starts with you.