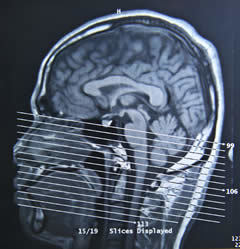 About 18 months ago, while watching her 14-year-old son, Alex Mobashery, snowboarding in Harbor Springs, Michigan, Mayland Chang had one of those heart-stopping moments no parent ever wants to experience. While Alex was attempting a stunt, he lost his balance and hit his head on the ground. In that instant, the teenager joined the estimated 300,000 Americans each year who suffer a sports- or recreation-related “mild traumatic brain injury,” or concussion, as it is commonly known.

As large as that number is, it does not include other sources of concussion such as falls, auto accidents or assaults. In fact, it may be just the tip of the iceberg, even for sports-related traumatic brain injury. Leading authorities believe that up to half of all sports-related concussions go unreported. Additionally, an estimated 360,000 veterans of the Iraq and Afghanistan wars are believed to have suffered traumatic brain injury, mainly from the shock waves caused by improvised explosive devices.

Concussion symptoms include confusion, amnesia, headache, blurred vision, seeing bright lights, dizziness, lack of motor coordination, balance difficulty, ringing in the ears, nausea and disorientation. The injury may or may not be accompanied by loss of consciousness. However, if it is, the longer a person remains unconscious, the more severe the concussion.

As the Notre Dame chemistry research professor recalls, her son didn’t hit very hard, but because he seemed dazed when he got up, she and her husband, Shahriar Mobashery, were concerned. Mobashery, who also is an ND chemistry professor, and Chang took their son to a local hospital where a CAT scan showed no hemorrhage. Back in South Bend, the family followed up with a visit to a local sports medicine physician, who confirmed that the boy had indeed suffered a concussion.

It took about three weeks for Chang’s son to return to normal. In the intervening time he was prohibited from engaging in any type of physical activity that might aggravate the injury. Rest is the only current treatment for the injury.

There is a very good reason. The brain is suspended in an insulated, liquid shock-absorbing environment encased in a hard shell: It is a delicate, finely tuned instrument that quite literally gets scrambled if it is whacked hard enough. A severe jolt can disrupt the complicated cascade of chemical reactions that regulate the brain’s function. Among other things, affected parts of the brain lose the ability to metabolize glucose, and neurons no longer transmit impulses normally. With proper rest, the brain chemistry gradually resets, and most people are back to normal, like Alex, within two to three weeks.

However, multiple concussions have been increasingly implicated in more serious long-term medical problems, such as chronic traumatic encephalopathy, a degenerative disease that affects judgment, memory, mood and impulse control. And there is concern that even multiple sub-concussive blows may lead to the disease. Boston University’s Center for the Study of Chronic Traumatic Encephalopathy has found evidence of the malady in more than 20 former NFL players, including Notre Dame All-American Dave Duerson ’83, who killed himself in February and requested in his suicide note that his family donate his brain to the study.

Chang looks on all of this with personal and professional concern. A scientist who comes from a commercial drug discovery/development background, working for Upjohn and later for Pharmacia, she recognized that certain compounds, known as MMP inhibitors, which her husband had worked on, intending them as an anti-cancer therapy, also had potential for concussion treatment.

With her pharmaceutical industry experience, Chang was aware that the necessary FDA clinical trials for a cancer drug would be lengthy and therefore extremely expensive, since cancer metastasis is a slow, oftentimes many-year process. A quicker route to FDA approval for the compound, she knew, would be to explore its potential as treatment for traumatic brain injury, and she decided to explore that avenue. Recently, NFL Charities confirmed Chang’s approach by awarding her a research grant to investigate the compound’s potential for concussion treatment.

In his earlier work, Mobashery had identified compounds that inhibit selective MMP enzymes known as gelatinases, which are important both in the spread of cancer and in stroke damage. The enzymes are involved in maintaining the integrity of the extracellular matrix that gives structure and rigidity to tissues. Most people have a low level of these particular enzymes, but high levels are produced during remodeling of the extracellular matrix that occurs in a number of pathological conditions.

Chang explains that cancer metastasis and stroke share some common elements. In cancer metastasis, gelatinases are activated to increase formation of blood vessels that allow a tumor to spread to other parts of the body. In a stroke, under low-oxygen conditions, these same enzymes are activated and can lead to brain cell death, damage to the blood-brain barrier and hemorrhage. By blocking the enzymes, the ND researchers believe the compound could protect the brain from traumatic brain injury, preventing cell death and brain damage.

While effective in animal models of stroke and traumatic brain injury, the original prototype compound, known as SBC3T, is not water soluble. Chang and her colleagues have since found a way to attach water-soluble groups to the compound, which makes intravenous drug delivery possible. That ability is important because many of the patients, whether they are concussion or stroke victims, may be unconscious.

The early results for the compound have been encouraging. In tests in a mouse model for stroke, University of Missouri scientists found that the Notre Dame compound was able to rescue 60 percent of affected brain cells when administered two hours after the injury. The hope is that it might rescue an even greater number of cells if administered early after the injury. Tests in a mouse model of traumatic brain injury are under way.

Chang has established Nupromed LLC to commercially develop the Notre Dame-patented drug compound. The company is attempting to raise $4 million to cover the cost of toxicology studies, the first step in the FDA approval process to begin clinical trials in humans.