The most tumultuous year of the turbulent Sixties turned out to be 1968, and history’s trajectory changed not only in America but also across the globe. In between the assassinations of Martin Luther King on April 4 and Robert Kennedy two months later that bloody spring, France occupied the world’s front pages, as college students and workers rebelled at the status quo and shut down the country.

From May through early June, it was a time like no other. Schools on all levels closed. Factories ceased operations. Air and rail travel stopped. Mail went undelivered. Thousands of people took to the streets in daily protests, and at one point in the national upheaval upwards of 10 million people — two-thirds of the entire workforce — were out on strike. 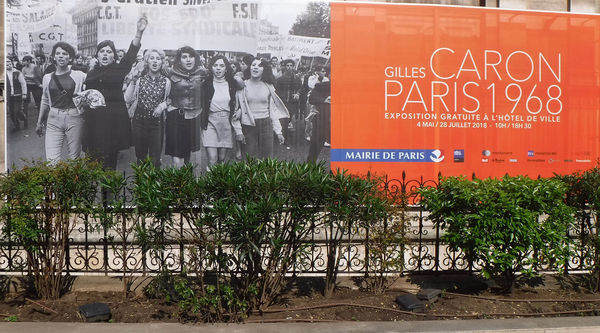 Gilles Caron's photographs of 1968 provide a compelling visual record of a turbulent time and people who were involved. Many of his memorable photos are now on display at the Hôtel de Ville (City Hall) of Paris in a special exhibit.

To watch a country go through the throes of becoming a society demanding new ways of thinking and acting proved irresistible to a 19-year-old studying in Notre Dame’s study-abroad program in Angers, France, a city nearly 200 miles from Paris in the Loire Valley. We awoke each morning never knowing what might happen.

For someone intent on going into journalism, all the turmoil was an earthbound heaven. Besides, our classes had been abruptly cancelled for the remainder of the semester. We were free to roam the streets to check out whatever banner-waving demonstrations might be occurring.

Who cared that we weren’t getting mail from home or that all public travel was shut down? We were young and in the middle of history.

When the chance to visit France during the 50th anniversary commemorations arose recently, it was impossible to say “non.” Journalistic — and historical — inquisitiveness had grown even stronger the past half-century, and there would be an opportunity to compare one’s memory to artifacts and archives of a distant time.

Paris was the focal point of the initial rebellious activities in 1968, and that’s where major expositions of remembrance are taking place today. At each exhibit around the city, visitors are reminded that what began as student protests (mainly in opposition to centralized bureaucracy within France’s educational administration) quickly developed into a more encompassing expression of dissatisfaction by blue- and pink-collar workers as well as others across the employment spectrum, including lawyers and doctors.

Daily marches often led to encounters pitting demonstrators against the police and other authorities. Around the Sorbonne, the prestigious university on the Left Bank, violence repeatedly erupted — with cobblestones dug up from the streets a favorite weapon for throwing at anyone wearing a uniform. Police operated from behind barricades and shields, while demonstrators overturned cars and garbage cans for their protection.

The streets of France from Paris to Angers and elsewhere — with their parades, speeches and battles — became the main stage for what happened in ’68. To be sure, there were lectures inside the Sorbonne and other schools — the philosopher Jean-Paul Sartre, for instance, rallied the young with weighty words—but dans la rue (in the street) was the place to be, and this phenomenon struck a naïve American as much more serious than any pedestrian street theatrics.

On May 13, it was reported that over a million men and women marched in Paris alone. Out in the provinces, sizable numbers also showed up in solidarity to register their economic, social and political disenchantment. A country previously resistant to reform heard proposals for change from dawn to sundown.

To show how rapidly events unfolded in that pre-social media period: The Sorbonne closed the first week of May, and the nationwide general strike — the largest in history, according to historians — took place about two weeks later. By early June, France was settling back down, yet still recovering from all the convulsions.

One of the best introductions to the spring of 1968 is an exhibition of photographs currently on display (until July 28) at the Hôtel de Ville (City Hall) of Paris. Gilles Caron, a photojournalist par excellence, captured the student uprisings, police actions, and political figures in the midst of upheaval with rare sensitivity and impartiality.

His portraits of France’s president, Charles de Gaulle, during a trip to Romania in the middle of May could be published in a dictionary next to the word “beleaguered.” The 77-year-old de Gaulle epitomized the ancien régime (or old order) in 1968 and became a principal focus of criticism during protests. Caron’s pictures reveal the worry and weariness of one of the 20th century’s most complicated military and political leaders.

The photograph advertising the exhibition features six young women in the vanguard of a street march, an important journalistic and sociological detail. Numerous academics date the birth of the women’s movement in France to May of ’68.

Caron’s photographic portfolio also plays a prominent role in “Icônes de Mai 68,” an exhibit at the National Library of France that runs until Aug. 26. The massive research complex, named for former president François Mitterand, brings together books, magazines, posters, still photos and short film documentaries to demonstrate that (in the words of the exposition’s subtitle) “Les images ont une histoire” — the images have a history.

One display traces the usage of Caron’s famous picture of Daniel Cohn-Bendit, an outspoken proponent of the student cause, face-to-face with a police officer. The number of different publications where this single shot appeared — and continues to pop up — is incredible, making it indisputably iconic.

The library takes advantage of its holdings in periodicals to give the visitor a valuable perspective of the enormous coverage devoted to what was happening in the streets and elsewhere. Large headlines promise comprehensive news reports about the “révolution,” “insurrection” and “révolte.”

Two expositions that recently closed devoted a significant amount of their attention to the affiches (posters) that quickly came into being as artists participated in events back then. This street art — celebrating the young, mocking de Gaulle, criticizing the Vietnam War — is enduring ephemera: simple yet striking, cartoonish yet captivating. 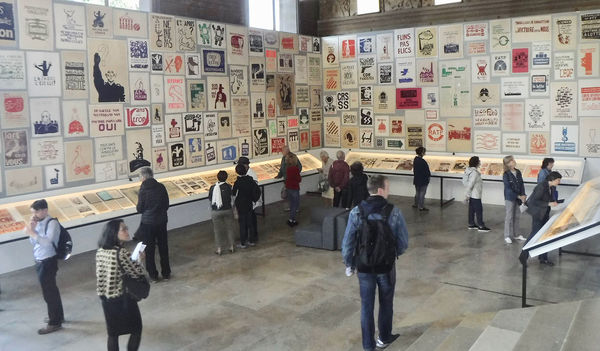 Posters were the principal street art of the 1968 protests in Paris, and the Palais des Beaux-Arts featured many of the most famous ones at the beginning of its exposition, "Images en Lutte" (Images in Battle).

At the Centre Pompidou, the art museum named for de Gaulle’s successor as president, some 258 different posters were featured in a video presentation from a historien de l’affiche — a poster historian. Interestingly, while gray-haired men and women watched the learned discussion of the poster expert, young people nearby busily engaged in creating their own posters relevant to 2018, especially the environment and immigration.

Meanwhile, at the Palais des Beaux-Arts, an exhibit titled “Images en Lutte” (Images in Battle) used posters and other artistry from 50 years ago as a springboard to “la culture visuelle de l’extreme gauche en France (1968-1974)” — the visual culture of the extreme left in France between 1968 and 1974. The radicalism of ’68 pushed political thought away from Gaullist conservatism for many, making such figures as Che Guevara, Ho Chi Minh and Mao Zedong more appealing, especially to the idealistic young.

For the de Gaulle government’s side of 1968, the National Archives has put together “68: Les Archives du Pouvoir” (68: The Archives of Power). This display, running to Sept. 17, provides the story of May and June from the perspective of those trying to keep order despite the disorder and anarchy. It’s a detailed view from the authorities’ side of the barricades, largely presented through official documents.

De Gaulle’s role in the days of demonstrations, confrontations and strikes remains fascinating. On May 29, for instance, he cancelled a cabinet meeting and, instead of going to his country home as expected, he disappeared. It was later learned that he’d secretly met with military leaders seeking their support if he commanded the intervention of troops to maintain his power. The elderly general, who’d valiantly fought against the Nazi occupation of France in World War II, was preparing for a new kind of battle, one where he was in the crosshairs.

Back in ’68, the Latin Quarter surrounding the Sorbonne offered cheap lodgings and cafes for students and others. Many a weekend Notre Dame students would head to Paris for cultural enrichment (and other pursuits), with the Left Bank a favorite destination for affordable accommodations.

Today, blocks around the Sorbonne are so gentrified and upscale that they seem out of place from the past. Within a stone’s throw of the Place de la Sorbonne, you find bookstores and cafes, but the landscape is more visibly dominated by brand-name shops: Gap, Salamander, United Colors of Benetton. All the railing against materialism shouted in 1968 didn’t have much impact on the streets where they were heard 50 years ago.

However, down the Boulevard Saint-Michel is the large book dealer Gibert Joseph. Assembled on two tables in the store’s history section are some 63 recently published volumes about 1968: memoirs, cultural and social studies, political assessments, chronologies, collections of photos, etc. Every angle receives attention to observe this year’s anniversary, reflecting the hold 1968 still possesses.

Newspapers and magazines loosely labeled what happened then as a “révolution,” but that’s something of a misnomer. Events of that May and June proved less consequential for the short-term future of France — de Gaulle, for example, remained in office another year — than for the long-lasting ways in which French people considered their contemporary circumstances.

All the protesting, debating and striking set a foundation for a France that began to evolve and change without the conflict and violence of those May days. Students and workers made their cases to those in charge and received some concessions for their demands, including more streamlined administrative policies, a higher minimum wage and other benefits. Women came out of the shadows to occupy new space in the country’s life. Supporters of de Gaulle began to realize that le Général might not be able to rule much longer.

Ernest Hemingway, no stranger to the Latin Quarter as an aspiring writer, once remarked: “If you are lucky enough to have lived in Paris as a young man, wherever you go for the rest of your life, it stays with you, for Paris is a moveable feast.”

Someone who experienced the spring of 1968 in France might say something similar, even a half-century later. The memories stay with you — and you seem young again.

Robert Schmuhl is the Walter H. Annenberg-Edmund P. Joyce Professor of American Studies and Journalism at Notre Dame, where he’s taught since 1980. He’s the author, most recently, of Fifty Years with Father Hesburgh: On and Off the Record (Notre Dame Press), which will be reissued this fall with a new afterword-chapter.