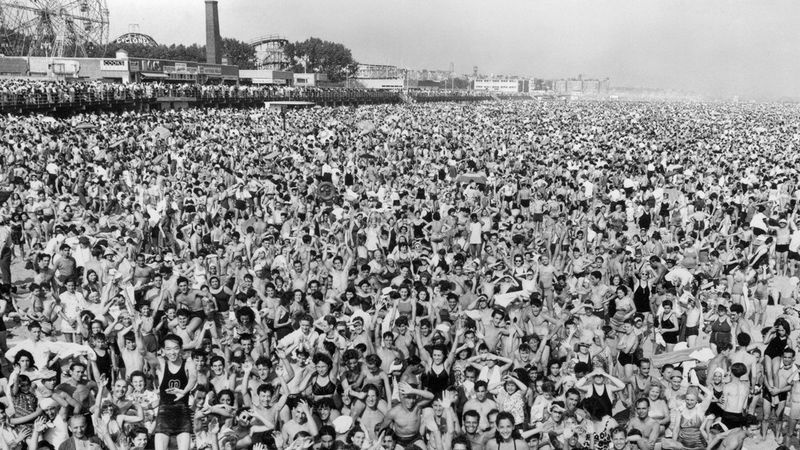 Editor’s Note: A ride on the D train to Coney Island. A crowded boardwalk. A climbing and swooping Cyclone that inspires “glee and terror.” Five years ago, Valerie Sayers wrote about the thrill from the kind of excursion we used to take for granted — and maybe soon will be able to again.

“We could go to Coney Island,” my son Chris suggested. “And ride the Cyclone.”

Coney Island! Mythological kingdom of my adolescent imagination. Growing up in the small-town South in the 1960s, I pored over Lawrence Ferlinghetti’s A Coney Island of the Mind as if it held the secrets of the universe.

In the ’70s, a college boyfriend, horrified that I had never been to Brooklyn, took me there on a gloomy Sunday afternoon to play skee ball among the hucksters and pickpockets and junkies of New York in its most inventive years of decline. Walking through Astroland was walking back in time, carnival egg creams and barkers beckoning. The Cyclone was closed that day, so we rode the Wonder Wheel, its cars moving back and forth between an inner and outer circle, a double-thrill Ferris wheel riddled with enough rust for that extra air of danger.

Coney Island! Last stop on the D train. In the ’80s I joined a group of mothers from Park Slope, Brooklyn, on subway jaunts to the funkiest beach in the city. We escorted small armies of toddlers, euphemistically known as playgroups, down to the sand, imploring them to tread carefully among washed-up syringes, discarded needles and enthusiastic exhibitionists.

Coney Island! Whose hordes inspired the street photographer Weegee to shoot the iconic picture of the crowded beach, the Cyclone just visible behind the bathers. In the ’90s, when I came to Notre Dame, I hung that photograph on my wall and wrote it into a story: “a beachful of bodies, immigrant bodies, stretching back for miles, almost as many people as grains of sand on that beach.”

And the Cyclone! Even an exclamation point could not do the Cyclone’s place in my imagination justice. I — roller-coaster lover, champion free-form screamer — had never ridden the legendary wooden tracks of the Cyclone. In the ’70s it was always closed for repairs or slated for destruction. By the ’80s, it was saved by landmark designation, but my sons were busy playing in the green fields of Prospect Park. In the ’90s I left for Notre Dame. Now in the ’00s, on my annual summer pilgrimage to Brooklyn, the Cyclone was waiting for me.

It was just the three of us that night, the parents wracked with nostalgia, our older son an old Brooklyn hand. A Notre Dame alum, he had returned to the borough of his birth like a homing pigeon, as his brother would do a few years later. Now he was our tour guide. We strolled a boardwalk where brisk walkers avoiding lowlifes had once rushed past us; now extended families and beaming old folks took their sweet time as the sun went down. We stood outside the still-new baseball stadium, home to the single-A Mets farm club, and marveled at Brooklyn’s comeback (even if we were Yankee fans). We had the requisite supper of Nathan’s Famous hot dogs and sweet soggy corn, washed down with cheap beer. The drum-roll of anticipation had been thrumming all night, but now it picked up volume. Time for the Cyclone.

We made our way through the gussied-up and newly christened Luna Park, with its respectable rides, fluttering flags and well-behaved children clutching towering and tottering cones of cotton candy. But Coney Island will always have a disreputable glow in its dark corners — it will always have come-on artists — so we were reassured. We had the right place. Here, on the outer edges of the midway, in all its regal old majesty, was the compact perimeter of the Cyclone, rising low but imposing in the night sky.

We paid an exorbitant price for tickets and queued to board a waiting train. Not sufficiently suicidal for the front seats, we climbed in a few rows back, our son behind us smiling indulgently at one silly, giggling parent. I couldn’t stop chattering. I hadn’t been on a roller coaster in 20 years, but I remembered precisely what I loved about them: When I was a kid, my mother always said: JUST REMEMBER, A LOT OF PEOPLE HAVE BEEN KILLED ON ROLLER COASTERS. This was thrilling. All I had to do was live through a quick, delicious descent into recklessness. All I had to do was forget the good-girl, hands-folded stuff for one minute, and scream myself silly.

As the other passengers boarded we heard the slide of strange vowels and the click of new consonants, the Babel-blend of exotic languages that makes Brooklyn sing so sweetly. Our fellow passengers surely included tourists, but most of them had the look of newcomers: immigrants, ready to try what the natives called fun. I was in good company, age-wise, not even close to being the oldest rider. Still, to give yourself over to a roller coaster is to give up a certain dignity. Here went mine.

Our ride began slowly, laboriously, melodramatically. The moment the car started rolling, it was loud: The clack of metal wheels on wooden rails was the soundtrack for a cheesy suspense film, the ominous incessant click reminding us of the age of this contraption, no matter how refurbished. It didn’t have long to build its rhythms — I knew before I signed on that its climbs and drops were modest by today’s roller-coaster standards — but as in cramped Brooklyn apartments, compression meant intensity. At the top of the first impossible drop, a 50-something professor was transformed: I was a 5-year-old girl about to twirl herself senseless on the playground whirligig, a teenager riding in cars with boys driving way too fast, a college freshman headed solo for New York, scared out of her wits and thrilled to bits. I contemplated those roller-coaster deaths my mother invoked, the snapped necks and arms, the passengers who couldn’t stop themselves from standing up — that strange appel du vide that called people to fling themselves from roller-coaster cars seemed strangely logical as the car flung itself down into its own void.

All around me were the night-piercing screams and mad cacklings of a professor let out of school — no, wait, that professor was me, that demented howling mine. The climbs and swoops were in collusion against me: nonstop climbing and swooping, climbing and swooping, whipping around. I couldn’t breathe, I could only choke out glee and terror. Through the train’s dozen drops and eye-popping turns, the lights of Luna Park were a psychedelic burlesque show. Every climb was a terrifying reprieve reminding me that I was about to go through this torment again, every swoop a recrimination of vertigo and organ-displacement, of being for a nanosecond utterly absent from my body and then pressed back into it again, like a grilled cheese sandwich under the press. Could an aging heart just . . . burst? And: What was the big deal? I used to love this. And: WHAT WAS I THINKING, AT MY AGE? Hang on, hang on, hang on.

It was over fast — way too fast: just under two minutes. I began to hiccup, to smile manically, as the cars slowed. Already I missed the thrill. The train slid into the loading station and halted, but my body still climbed and swooped. I wanted to keep rolling. I wanted to let loose one last unhinged cry of abandon. As I peeled myself off my husband, slammed into the corner of the car and deafened by my caterwauling, I heard my son behind us: “So what’d you think, Ma?”

I opened my mouth to answer, but my throat was too raw for words. The sound that came out was a lightbulb-popping belly laugh. I went to raise my arms in age-inappropriate triumph, but grasped instead for his hand, since I was toppling over.

I think the Cyclone is a death wish and a day at the beach, a chanted koan and a bellowed rap, a lunatic’s rant and a safely measured dose of danger. I think it’s a dazzled daydream of reaching the top, followed by a plunge into the trials of everyday reality. I think it’s Brooklyn itself, with its sweating swarms of laborers and grandparents looking for a moment’s rest, its hipsters and its old-timers riding the same car, its gangstas and its Sisters of St. Joseph reminding the faithful that this well-ordered life we’ve made for ourselves could go kaput any minute. I think it’s the best roller coaster ride in the world.

And from the safe distance of South Bend and my 60s, I think it is definitely time for another ride. Hey yo, Brooklyn, save a seat on the Cyclone for me. This time I plan to go around twice.

Valerie Sayers is a professor of English at Notre Dame.