A river runs through the city where I live. People drive along it and over it every day. Few slow down, and fewer stop. Some throw their old mattresses and blown tires into it. Others fish in it. A handful have paddled nearly every navigable mile of it, seeking exit from the daily strain and grind of clock-trapped life and entrance into that flow called “river time.” 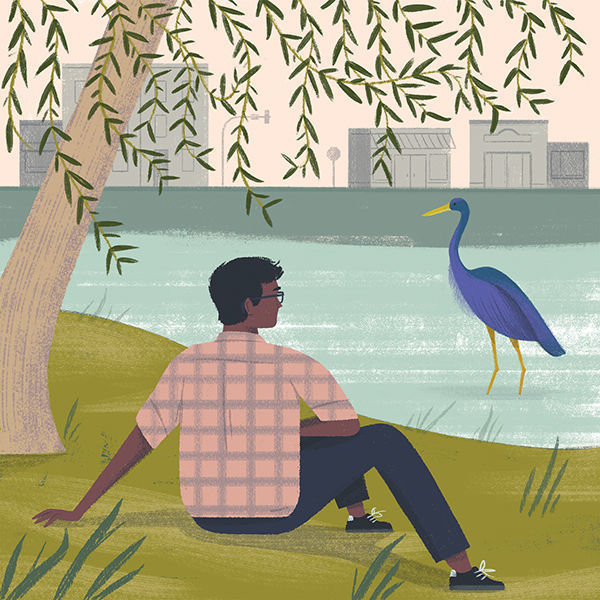 There was a time when I gave the river little thought. I was one of those who did not connect the name of my town to the bend the river takes here northward to the big lake. Despite a four-year degree in history, I could not tell you what kinds of wild rice were once cultivated in the floodplain here, who cultivated them or what the river was called when its waters were drinkable.

An elder of the Pokagon Band of the Potawatomi woke me up. At an interfaith prayer service open to the public, on a hill overlooking a spring-fed lake, she told me and everyone else how in her tradition’s creation story people came from water. It is our ancestor.

Now, I had absorbed enough science during my years of schooling to know that most of the human body is made up of two hydrogen atoms bonded to one of oxygen. It was a fact I could recite. Yet the elder’s words helped me to appreciate for perhaps the first time that I am mostly water — that I am alive inasmuch as I am fluid. And if you trace my lineage back far enough, it leads to the unfathomable sea.

Thinking of the river as kin brought up for me some strange questions, the kind that send people to Ellis Island archives, ancestry websites, villages overseas: Where do I come from? What am I made of and what does that mean? Is it too late to ask somebody about all this? For me, this meant asking: How do you get to know a river?

I went home and started looking for folks who seemed to know a thing or two about it already. A book told me the river is as old as the end of the last ice age more than 11,000 years ago. It is 250 miles long. A historian told me that poor kids used to fill their families’ fridges with salmon that migrated up into its tributary creeks till they were paved over in the 1970s. A fisherman told me that ever since he returned from the war, fishing this river is one of the only ways he can really relax. I asked if he ate the fish and he asked if I was crazy.

His reply hints, I think, at the way in which the collective consciousness of this town (Midwestern, Rust Belt, busy building a brighter future) holds its river — at a distance, with distrust. We are ambivalent. It is pretty, a nice thing to sit beside or run along. Don’t get too close, though. A Google search shows old headlines about all the interesting ways people have found to get hurt in the river. Everybody knows somebody who’s heard of someone who swam in the river with an open wound and died within a week.

The river is dangerous, to be sure. But so is a mentality that would render it alien or inanimate. Are we a part of or apart from this ecosystem we call home? We do not now rely on the river for transportation, food, fresh water. We do not see it as a source of life when water fills our toilets and gushes out of our faucets with the flick of a finger, without a thought, hot or cold. How seldom have I wondered: Where does it come from? Where does it go?

An engineer friend shed some light on this recently. He works for an environmental engineering company that is building a system of sophisticated sensors in the sewers designed to redirect sewage and keep wastewater out of the river. When a hard rain falls, however, my friend says:  Yes, there will still be poop in it.

It scared me to think that some hundred thousand people in my town alone obliviously depend on the goodwill and expertise of people like my friend to keep us from poisoning our water table and ourselves. I stewed on this for a while. So far my efforts to get to know the river better had taken a distinctly top-down approach. I had acted as if experts could tell me what the river was. It became clear that I might just have to ask the river itself.

So I sat down to listen.

At first it was hard to hear past the roar of traffic, the rumble of trains, the cough and scream of engines, the blaring obligations of schedules and detuned static of my own uneasy thoughts. Underneath, there was something. When the noise of the human-made world subsided, it rang through clear as a bell. You could call it a toneless hum. Silence speaks more to the depth of it.

Sometimes it is a loud music. When the geese get upset about something. When the spring rainstorm sculpts the surface into uncountable circles then shatters them in a gust. When the heron’s pterodactyl croak calls out. When the waters rise and slurp at the long limbs of a bowing willow on the bank.

Early one midsummer morning on my bike ride to work, a full moon hung low over the river. I stopped on a pedestrian bridge and looked. Down in the eddies a great blue heron stood statue-still for longer than I could hold my breath, then took a soundless step. Up the bank it moved like smoke. Near a downed cottonwood limb it paused, motionless as a mountain, then flash-quick stabbed its sharp beak into the shadows of the shallows like a bayonet. Breakfast.

I would have seen none of this if I had slept in, or if I had driven my car instead, or if I were simply in a hurry, lost in worry.

The more I drank of the river’s secrets, the thirstier I became. I had to get out on the water.  A buddy of mine and I borrowed a canoe one day and floated a couple of miles. I asked the river for permission before getting into the boat, not because I expected any romantic or even audible response, but because I am not totally free from fear of the unknown.

We shoved off, and suddenly on all sides I was struck by the green of it. In the downtown of a midsize city, we could have been anywhere but for the bridges. If the river corridor is not wild, perhaps it is feral. When I think back on what it felt like to be floating along in its flow for the first time, I am reminded of the neuropsychiatrist Daniel Siegel’s description of the mind: an ever-changing flow of energy that is both within our bodies and between us, in our connections with each other and our planet. Was there not some reflection of me in these waters, of them in me?

At one point, my co-canoeist spotted about a dozen turtles sunning themselves midstream on a log. We rowed like mad upstream to try to get a better look, but the current overwhelmed us and we whirled around backwards, laughing. When we stopped to climb an old sycamore that reached out over the water, I fell in.

I did not die within the week. I did not burst into flames. I got cold and wet and glad.

Now river swims are a regular part of the warmer months. Immersed in this margin at the heart of my river town, I swim, and the knots in my back and in my mind come undone. My engineer friend said he would stay out of the water for a day and a half after a rain shower, just to be safe, and I follow his advice. My hope is that the beauty and refreshing coolness of the river will not be wasted. Others may see and wonder. Maybe by building a relationship with the river, in little ways, we can transform ambivalence into affection.

Of course life’s quotidian demands do not stop. But whenever I can I take time to sit and listen to the river. I go for walks on the path near my house with my wife and young son to throw sticks in the water and see what the ducklings are up to. From the geese to the kingfishers to the millions of minnows by the municipal boat dock, I see that the river is teeming with life. It is no longer crystal clear, but I have banished all doubt that the river has something to say, to those who would listen, at the confluence of the molecular and the miraculous.

This essay by John DiTillo was one of four second-place winners in this magazine’s 2017 Young Alumni Essay Contest. DiTillo is a native Missourian who worked in Haiti as a teacher and coach for four years after graduation. He now calls South Bend home, working summers on nearby farms and serving as an assistant guide at Good Shepherd Montessori School.