“Santo subito! Santo subito!” cried the people in St. Peter’s Square on the death of Pope John Paul II in April of 2005. They were urging “sainthood now.” I remember those exuberant shouts, how they seemed to mourn his death yet celebrate his life. I remember them well because his death had rekindled the memory of a special encounter I had with him.

Karol Józef Wojtyla (as he was baptized in 1920) was the first non-Italian Pope in 450 years. His papal persona was refreshing and infectious. He had charisma for the ages, and the vitality of youth as he skied and prayed his way into the hearts of Catholics and non-Catholics all over the world. One of those Catholic hearts was my own.

On September 14, 1987, Pope John Paul II arrived in Phoenix, Arizona, to spend a whirlwind 24 hours in the city. In that short time he spoke to and connected with a multitude of followers, including a speech to 16,000 Native Americans at Veterans Memorial Coliseum, and a Mass before 75,000 of the faithful in Sun Devil Stadium. He also spoke to more than 2,000 health care executives and professionals from the Catholic Health Association in a meeting at the Phoenix Convention Center. 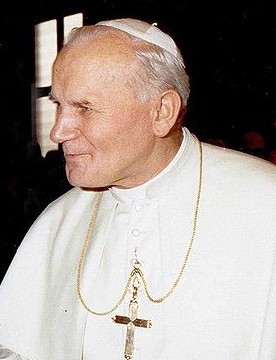 At the Phoenix Convention Center, I was the guest of Bill McGuire ’65, the then-COO of Mercy Catholic Medical Center in Scranton, Pennsylvania. We had two of those precious tickets to that CHA meeting. To be admitted we had to subject ourselves to an elaborate security check, commonplace today, but a rare imposition then. We arrived early and were lucky enough to get seats on the center aisle, toward the front of the assembly room. When the pope and his attendants arrived from a side entrance, there was a surreal hush from the audience, as we all absorbed the moment.

The pope gave a passionate and compassionate message to the Catholic Health Association about the ethical dilemmas they face every day, ethical issues that challenge their commitment to fulfill the teachings of the Church: “The church constantly proclaims and defends the dignity of human life from the moment of conception to the moment of natural death.” He reassured the Catholic Health Association group that “as you courageously affirm and implement your moral obligation and social responsibility to help those who suffer, you are, individually and collectively, living out the parable of the Good Samaritan.”

Although I was not a health care professional, I was struck that his message should apply to me as well in my legal ministry. It was a reminder that I have a moral obligation and social responsibility to my community, and that as a lawyer I can and should be a Good Samaritan for those who are victims of crime or who otherwise deserve legal support. That message continues to resonate today, as our society needs community service more than ever.

After he finished his remarks, Pope John Paul II moved forward to bless the audience, moving from the right side to the left side. As he moved, the audience responded rhythmically. It was an ethereal moment. I could feel a special sensation as the pope gave his blessing, as if the Holy Spirit was hovering above him.

The program was over and the pope was about to go on to his next appearance. But instead of exiting through the side entrance as he had arrived, he started down the center aisle to personally greet the lambs in his flock. Everyone in the audience was electrified as he moved slowly down from the stage and seemed to float toward the audience. I was sitting on the aisle and put out my hand towards his white cassock, now surrounded by a sea of red and purple cassocks, as waves of cardinals and bishops moved the tide. He firmly grabbed my hand. I could feel my heart throb. I had shaken the hand of Pope John Paul II.

Looking back on that special moment in Phoenix, I still feel that mystical sensation, that tingling time when I was touched by the hand of Pope John Paul II, and by the spirit of Saint John Paul II. Viva il Papa. Viva il Santo.

Merle Wilberding ’69J.D. is a partner at the Coolidge Wall firm in Dayton, Ohio, and the author of many books and articles. Wilberding also has degrees from St. Mary’s University (Minnesota) (B.A.), George Washington University (LL.M.), University of Dayton (MBA) and University of Wisconsin – Milwaukee (M.L.I.S.), but remains a diehard ND football fan. Contact him at wilberding@coollaw.com; or follow him on Twitter @merlewilberding.