Growing up, I always wanted to learn how to play the drums. With limited access to instruments and with the notion in mind that “drums are for boys,” I never considered truly pursuing this skill. Earlier this month, however, I had the immense joy of watching young women creatively flourish at a new, revolutionary camp called Girls Rock Michiana.

In this two-day camp, a group of about 30 girls in grades 4-8 had the opportunity to sing and rock out on the electric guitar, bass guitar, drums and keyboard with the guidance of professional music instructors. It took place at The Music Village in downtown South Bend under the direction of Carolina Warkentin and with the collaboration of Notre Dame’s Gender Studies Program. 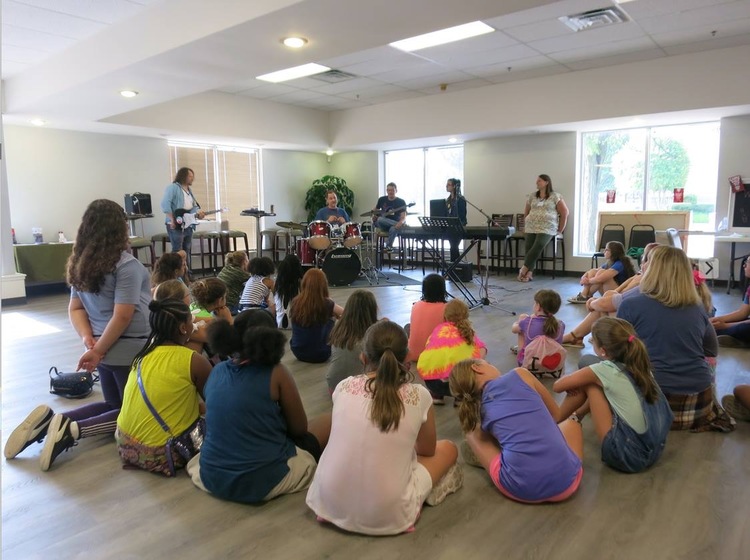 Campers listening in on a jam session. Photo courtesy of Girls Rock Michiana

Dr. Mary Celeste Kearney, director of the Gender Studies Program and associate professor in Film, Television, and Theatre, was a driving force in starting the camp. Kearney — who published her latest book, Gender and Rock, before beginning her third year as Gender Studies director last fall — came across the Girls Rock Camp Alliance while researching one of her previous books. The organization operates more than 100 camps around the world for girls who want a bit of hands-on experience with rock ‘n’ roll, but, when Kearney discovered the group, none of their camps were near South Bend. Along with several students from her “Gender and Rock Culture” course, she decided to change that. Together with the South Bend music community, they recruited students, forged a partnership with Music Village executive director Josh Aerie, and drummed up funds and publicity. Before long, Girls Rock Michiana was born.

Kearney says that, given the state of the music industry, initiatives like these are crucial.

“Anything that has major creative control, like the director of a film, or a record producer — and more importantly any position that is very profitable, very lucrative — women have been kept out of,” she says.

On stage, female singers aren’t uncommon, but instrumentalists tend heavily to be men. As Kearney explains it, that’s largely because the role of lead singer is visual as well as musical. The lead singer of a band is its face, which allows a woman to occupy the role in a non-threatening way that draws as much attention to her beauty and sexuality as to her voice.

“But you put a guitar in a woman’s hand or you put her behind a drum set — or she’s not really interested in being ‘pretty’ but being a musician — that all complicates things greatly,” she says. “It’s my personal hope that they learn that playing music can be more than just singing, and that it can be really a very powerful act.”

With Girls Rock Michiana, Kearney hopes that she can expand the idea of rock — for campers and observers —  in a way that helps dismantle the barriers of sexism and misogyny that women encounter in the music industry.

“For women and other people like me who’ve gotten ahead to be able to stretch down a hand and lift somebody up — that’s always important,” she says. “On the macro level, I hope to facilitate dreams.”

As a “band manager,” I arrived a little early to the first day of Girls Rock. The blue star in the upper corner of my name tag would help me identify my “band members” as they rolled in and collected their name tags.

“Blue star?” I called out to two girls who had been dropped off early. Bryanna and her younger sister Lisa nodded shyly and joined me in a corner of the room. Having attended a few camps as a child, I remembered how terrifying it felt on the first day of camp, being thrust into a new environment and having to try new things. We talked about the basics: school, favorite foods, the start of the summer. After a quiet moment, I glanced at the girls — Bryanna’s hair was fully crimped and Lisa’s was half-shaved — and immediately knew my group was going to be great. 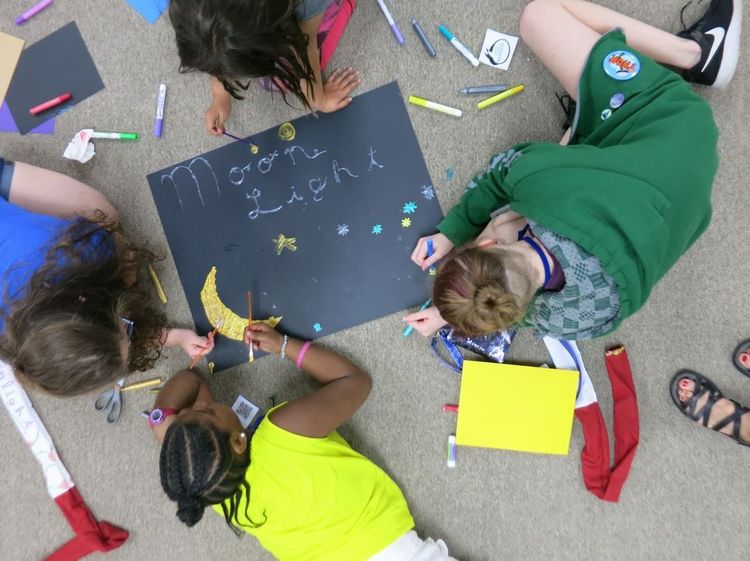 Akira, Allanah, and Myla, the rest of our band, joined us not long afterwards. Most of them were pretty quiet, but the feeling of nervous excitement rose as more campers arrived and the girls began to chat with one another.

The camp started out with a dance session, with the girls’ ages fascinatingly in play. The younger ones, seemingly indifferent to others’ opinions, danced without a care in the world. But as their ages increased, girls seemed to feel less and less comfortable dancing.

I don’t blame them. En route to adolescence in today’s androcentric society, an astounding number of young women develop mental health issues, from low self-esteem and poor body image to social anxiety, that can last well into adulthood. Under the weight of societal pressure to adhere to traditional gender roles, girls like these young rockers all too often take hits to their confidence and find their expression of individuality limited.

But Girls Rock strives actively to dismantle these challenges. By providing an accessible, inclusive and safe place for creativity, the camp uses musical engagement as a tool to build collaboration and confidence among the cisgender and transgender girls and genderqueer kids who are invited to attend. Dancing it out was their first small step in this direction.

Not long after the dance session, we rotated through the guitar, bass guitar, drums and keyboard stations. Each station had a professional music instructor that taught an impressive set of basics to the girls in under 30 minutes each. At each of the stations, I could tell that my girls were initially reluctant to try out the instruments, but grew more confident under the direction of their instructors. Bryanna was eager to try out the keyboard, and I happily observed as she carefully positioned her fingers on the keys and managed a triumphant C-chord. Most of these girls had little to no musical experience, and I was floored by their bravery in trying new things in front of strangers and their extraordinary ability to quickly pick up these new musical skills.

The girls cycled through various activities throughout the afternoon — an image workshop with Kearney and Notre Dame MFA student Heather Tucker, lessons in self-defense and songwriting, a selfie-filled meet-and-greet with WQLQ 99.9 FM personality Alexandra “Ayeeedubb” Wurst — and, by the end of the day, they had learned valuable lessons and started to gravitate toward their preferred instruments or vocal positions. Each band had also settled on an image: Ours would be called “The Dip-’n-Dots,” and we would each perform wearing a specific color of the rainbow.

The next day, a hodgepodge of notes filled each room as girls practiced their instruments. They were definitely frustrated — learning an instrument takes a quite a bit of time — but they dug deep to remember what they had been taught the day before. Eventually, the group split up so instrumentalists and vocalists could work with their respective instructors to learn the Girls Rock Michiana anthem that each band would perform at the end of the camp.

Lisa, the vocalist of my band, was apprehensive about singing when we began practicing as a band — which, as someone who tends to avoid every opportunity to sing in front of others, I understood. After some thought, I led her outside of the room to a quieter environment, and we sang the anthem together a few times. When we joined the other vocalists, I could pick out her voice from the group and watched her sway to the beat of the song. At the end of the session, she asked me if she could sing by herself from there on out. I couldn’t have been more proud.

Later that day we visited UpState Recording, South Bend’s very own professional recording studio, just down the street from the Music Village. It features a vocal isolation booth, a guitar cabinet isolation booth, a live drums room and a spacious control room. UpState staff explained the studio’s features (and its impressive roster of female employees and clients) and gave each band the chance to record themselves on a real, live set.

We regrouped back at The Music Village and began to practice as a band on our own. Remembering from childhood piano lessons how frustrating practice could sometimes feel, I was a bit nervous about leading my band through a rehearsal. Coordinating several instruments, most of which the girls had never tried to play until the day before, seemed like an impossible task. 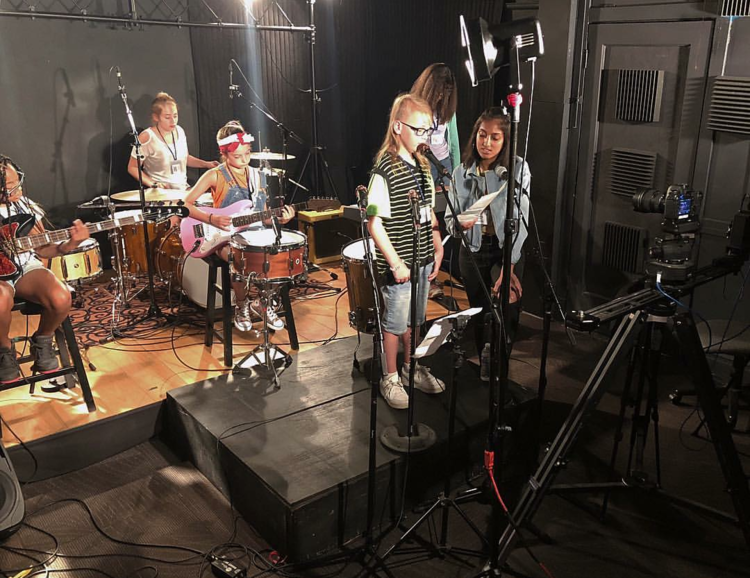 The author (right) leading her band through a rehearsal. Photo courtesy of UpState Recording

I counted off in tandem with Allanah’s drumbeats, and we began. The first run-through wasn’t flawless, but I thought they sounded great. The girls thought otherwise. They dejectedly sighed and looked at me for direction, and I encouraged them to try again. We practiced the piece over and over again, focusing sometimes on the chorus, verse or bridge and other times on specific instruments. Slowly but surely, the girls began to sound like a band.

Carolina, the camp director, stepped into the room to listen to our progress. This time, I didn’t even need to count off for them. Allanah pounded on the drums, Bryanna carried the melody on the keyboard, Akira and Myla tore up the guitar and bass, and Lisa sang her heart out.

“That was AMAZING!” I exclaimed at the end of their run as the girls beamed at each other. The energy in the room was palpable. I could hardly contain my pride for these girls.

In just two days, “The Dip-n-Dots” had truly come together.

Before we knew it, the end-of-camp rock concert had arrived. The scent of colored hair spray filled the air as a blur of sparkly, neon heads of hair ran around me, scrambling to affix temporary tattoos and rockstar stickers in just the right spot. A whirlwind of nervousness and excitement escalated among the girls — punctuated by just the occasional meltdown — and, by the time their families and friends had arrived, everyone was ready to rock.

Before the concert, I asked Myla, my band’s electric guitarist, what the most important thing she had learned from this camp was. “That girls rock!” she replied with a toothy grin.

And that they did. The bands Star Dust, Dip-’n-Dots, Rockin' Rebelz, Moonlight and Midnight Stars poured their heart out into the anthem that they had managed to conquer in the brief duration of the camp. The audience was all smiles as this group of girls unapologetically rocked out and expressed themselves with their bandmates. It was an unforgettable atmosphere.

I asked Dr. Kearney what piece of advice she would give to a young girl interested in pursuing a career in the music industry. After some thought, she remarked, “I would tell her to find a group of friends: a group of female friends but also male friends who are supportive of her, and to always rely on them. I think that’s key.” She continued, “And take risks! I think too often in life many of us choose the easy path. The easy path is comfortable but it may mean giving up your dream. Seize those opportunities that may not come again in your life.”

I believe all of us can benefit from Dr. Kearney’s advice. Who knows? I may even pick up the drums.

Dinuka Cooray is an intern at this magazine.