Geoffrey Siwo’s lesson in his Kenyan junior high school about cancer didn’t sound right. His teacher explained that a high rate of cell growth characterizes the disease. She sounded assured, so he decided not to ask the question that puzzled him: How could cell growth be a bad thing?

Siwo went home that night and looked up cancer in the dictionary. The definition sounded more or less the same as his teacher’s. But that was just a dictionary, not a scientific authority. There was also a medical reference book in the house.

“I went and read that book and got a pretty much similar description,” recalls Siwo ’14Ph.D. “Then I said, ‘Maybe there’s something more.’ This is a medical book, you know, for doctors, so I went to read a more detailed biology book.” 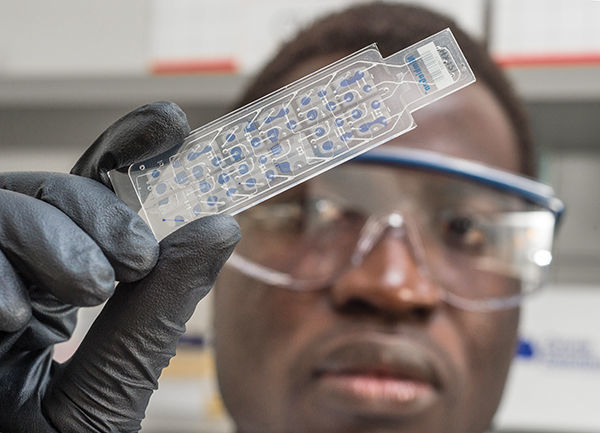 It’s not that he was unconvinced. Each layer of information just deepened his interest. For Siwo, now 34, the searching curiosity and stirring determination in the idea that “maybe there’s something more” has become the basis of his scientific ambition.

He wants to cure disease. And he’s not particular about how, a mindset that has produced some unusual but fruitful ideas outside the lines of conventional research.

“He’s a boundless thinker, not constrained and timid about ideas,” says Michael Ferdig, a biological sciences professor at Notre Dame whose research into malaria drug resistance attracted Siwo to the University in 2008.

Just one of his ideas: Siwo, with fellow ND graduate students Ian Sander ’13Ph.D. and Victoria Lam, developed a video game that won the science competition in Notre Dame’s 2013 Graduate Research Symposium. Fit2Cure applies the human capacity for spatial reasoning to the development of medications. Players need no scientific knowledge, but the ways they fit shapes together generates data about how drugs could bind to proteins, the first step in creating effective treatments.

Siwo’s tendency to follow his curiosity wherever it leads seems to be as much a genetic expression as his height or eye color. Ever since he started rooting around the reference volumes in junior high, it’s been a dominant trait.

“It immediately became clear to me that the only way to understand cancer was almost to try to understand every bit of biology,” Siwo says. “And so I wanted to understand how growth happens, and growth is tied to almost everything in biology.”

The youngest of seven children in a middle-class Kenyan family, he grew up in rural communities as a boy and later in Kisumu, a city of more than 400,000, where he attended high school. Everywhere he went, he brought an abiding interest in basic biological questions.

Learning that humans have 46 chromosomes, Siwo wondered, “What determines which genes go to a particular chromosome?” At the time, his brother Amos was researching Stanford medical school, and Geoffrey paged through the university’s prospectus and found contact information for the biology department chair.

“I didn’t have access to a computer,” Siwo says, so he posed his question in a handwritten letter.

Six months later, a heavy parcel arrived from Palo Alto, California. It contained the definitive text Molecular Biology of the Cell. The professor’s note told Siwo, “maybe I would find my answer in that book.”

Siwo found much more than that — and, in his perpetual attachment to the book, a talisman of his scientific immersion. Comprehensive and detailed at more than 1,000 pages, the text covered a breadth of biological subjects that even a string of degrees could not encompass.

“Because this was something I was deeply interested in and I was learning, I was not choosing which parts I wanted,” he says. “I wanted to know all at that point.”

Siwo’s literal book-learning turned out to be only partial preparation for his education at Egerton University in Njoro, Kenya, where he received bachelor’s and master’s degrees. He studied under a scientist researching endogenous retroviruses, which live in the human genome, the body’s genetic material.

“Some of these viruses in our own genome look like HIV,” Siwo learned, and soon he had his next all-consuming question — emphasis on quest.

He wanted to know if that inherited resemblance to the virus that causes AIDS meant that a mechanism allowing HIV to become drug resistant might be built into the human genome. In other words, could HIV “borrow” an enzyme from an infected person’s genome to protect itself from medication?

No book contained that answer, and there were no feasible lab experiments Siwo could conduct. That left the second-year undergraduate, who had never relied on technology more advanced than the printing press, with only one option: to teach himself how to do computational analysis.

At a new campus Internet café, Siwo paid five Kenyan shillings a minute to mine public databases and analyze DNA sequences of the human genome with online software he had never used before.

“Within a few months,” he says, “I was actually able to show that, based on the sequences of the viruses in the human genome, there is a potential that if HIV figures a way to borrow those enzymes, then HIV can become resistant to the drug.”

Seeking feedback, Siwo sent the evidence to an official at the National Institutes of Health (NIH) in the United States. The response: an airline ticket and an invitation to present his findings at a conference in Chicago.

Some of the scientists there — from pharmaceutical companies developing HIV treatments, for example — knew little, if anything, about endogenous retroviruses. Siwo’s professor back in Kenya, on the other hand, focused his research on them but did not study HIV. Evidence now suggests a link, an activation ¬of the retroviruses in the genome, perhaps triggered by HIV itself, as patients become sicker.

The experience forged his belief in two factors that have come to define his work: collaboration and computation.

Using computer modeling, Siwo notes, means the vast array of factors that contribute to illness, recovery and prevention — susceptibility to infection, immune response, drug treatment, vaccination — now conceivably could be investigated in all their complexity.

Siwo takes the next step, identifying the signal in that disorienting noise and recognizing how the information can be put to practical use.

“A lot of kids understand this is the future, the power of the new data-driven approach. In a way, he’s out ahead of that,” Ferdig says. “Most folks can’t come up with the creative application. He can put the pieces together.”

His work in Ferdig’s lab over the past six years focused on malaria, a disease that killed one of Siwo’s sisters. Cells in malaria parasites have developed resistance to the widely used drug chloroquine. A mutation that causes such resistance, though, also might produce vulnerability to a new treatment. “So the idea is: Can we look at the circuitry of the cell and how it changes when resistance emerges and then try to target that with drugs?” Siwo says. “Sort of take advantage?”

Each patient also has an individual immune context. Siwo, who had malaria many times while growing up in Kenya, carries a genetic mutation that prevents it from being fatal. “You take the drug anyway” when you’re infected, he says. While there’s no such thing as total immunity, a person’s inherent resistance helps determine a medication’s effectiveness.

Those factors make medical intervention and innovation to treat any disease a constantly moving target in an environment of dizzying variability. Solutions, Siwo believes, require collective intelligence. “Collective in the sense that humans don’t solve any given problem exactly the same way,” he says, “and so if you match all those different ways in which people solve a problem, then you can get a solution that is better than any one of those individuals.”

Call it crowd-sourced science — and he has shown it doesn’t necessarily take a large crowd to be successful. In 2011 Siwo, biologist Richard Pinapati, computer scientist Andrew Rider ’12M.A., ’13Ph.D. and laboratory technician Asako Tan made up Notre Dame’s unlikely entry in a global gene-sequencing competition.

“His little band of local graduate students and technicians,” Ferdig says, defeated a field that included world-class mathematicians and computer scientists. The Notre Dame team’s complementary backgrounds turned out to be an advantage, allowing them to develop predictive algorithms better tuned to the topic than competitors with more specialized training.

“His thinking is not constrained by the typical academic boundaries,” says Dartmouth College geneticist Scott Williams, an adviser for the postdoctoral appointment Siwo began there in August. “We talk about the diversity of thought, and this is a situation where it may be playing out.”

As a scientist without borders, Siwo often serves as an interpreter across them. Even as the boundaries of traditional disciplines become more porous, old habits hamper communication. In Ferdig’s lab, Siwo helped bridge the jargon barrier between mathematicians, computational scientists and biochemists collaborating to fight drug resistance.

“Having a guy like Geoffrey at those meetings is great,” Ferdig says, “because he can just quickly connect the dots.”

At Dartmouth he’s trying to connect the dots of African genetics. Relatively little data exists despite populations that possess more genetic diversity than the rest of the world combined. That diversity gives Siwo’s approach implications far beyond the continental borders, but it’s also intended to improve treatment for Africans themselves as genomic sequencing personalizes medicine.

He will teach courses based on understanding a specific problem — the genetic basis of cancer in African populations, for example. Everything will be geared toward producing data on the course topic. That information could then be made public for anyone to pore over and offer insights even scientists might not identify.

It’s an idea conceived to solve the current question that consumes Siwo: “How do you combine computing and . . . crowd-sourcing in a way that you can use it to solve medical challenges with genetic data?”

Siwo’s urge to find answers is the same one that drove him in junior high. Maybe there’s something more — more to learn, and with additional knowledge, advanced technology and an inspirational purpose that attracts a crowd, more to accomplish.

Jason Kelly is an associate editor of the University of Chicago Magazine. His most recent book is Shelby’s Folly: Jack Dempsey, Doc Kearns, and the Shakedown of a Montana Boomtown. Email him at jasonkelly545@gmail.com.