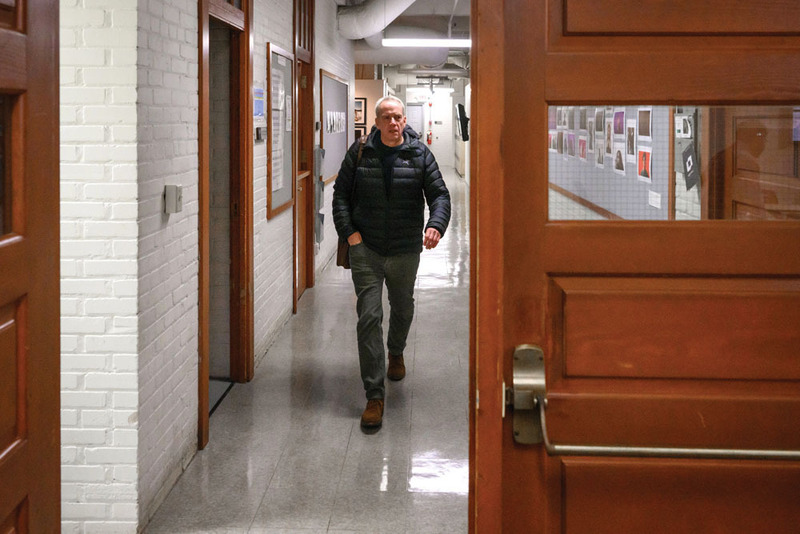 Ed White ’83 stands out from the dozen or so undergrads taking a course in magazine writing in Room 200 of Riley Hall, the once-upon-a-time chemistry building now occupied by the Department of Art, Art History and Design. But never more so than today.

It’s a class intended to demonstrate interviewing techniques, and the career foreign service officer has agreed to the interrogation. Before launching into “press conference” mode, White gives a quick briefing on his 25 years with the State Department, offering insights from real life about the importance of remembering — as you field questions — that you represent the United States government, not yourself. He talks about handling tough inquiries, building trust with members of the foreign press and piloting through some tricky diplomatic protocol with a “seasoned” statesman’s experience.

He also tells the story of getting snagged to be the official note taker during a 2009 meeting in Cairo between then-Secretary of State Hillary Clinton and Egypt’s longtime president Hosni Mubarak to discuss peace plans and the rebuilding of Gaza after fighting there between the Israelis and Palestinians.

In his tenure with the U.S. diplomatic service, the lawyer and former U.S. Army officer held posts in Brussels, Beirut, Baghdad, Damascus, Caracas and Cairo. The students have plenty to ask about.

White happens to be in this class as a participant in Notre Dame’s Inspired Leadership Initiative (ILI). The ILI fellows are typically late-career individuals who have attained a notable level of accomplishment in their fields and are ready to step back, refresh and discern new directions for the next phase of their lives. They spend a year on campus and work with an adviser to tailor a course load of three classes per semester. They are also enrolled together in several core courses, including a Great Books seminar, a “life design” class and a more theological undertaking to decipher “the heart’s desire.” White has been reading Sophocles, Wordsworth, Viktor Frankl, Frederick Douglass, Desmond Tutu and the Dalai Lama.

White provides a glimpse of the other side — to be the spokesperson, representative and gatekeeper deftly dueling with reporters seeking information and insight.

Stanford and Harvard have similar “encore education” enterprises; Notre Dame has crafted its core-course lineup to reflect the institution’s strengths and educational character. For other classes, the ILI students — an intentionally diverse group — devise their own flight plan.

“I returned to Notre Dame as a fellow,” says Chicagoan Mary Ellen Woods ’80, a member of last year’s cohort, “with a mind to discern my next passion — how I could help young people get to and through their college education.” As a path toward reaching that audience, Woods took a journalism course taught by the opinion editor from the South Bend Tribune. “What I found,” she adds, “was my voice — writing every other week in The Observer and a series of pieces for various Notre Dame groups and activities. I had an extraordinary year.”

In addition to magazine writing during the fall semester, White is taking a couple of classes geared toward grad students — including one on Islamic law — that supplement his personal knowledge of international and governmental relations, while also putting him in a classroom where he can proffer real-life insights to complement academic theory and concept.

The fellows meet for lunch twice a week and hear a guest speaker. Of the 20 fellows, only a few are Notre Dame grads, and the roster includes veterans from education, health care and executive management, a lawyer, a former member of the military, an economist whose life’s work has been human development in Cameroon, an Anglican priest whose ministry has taken him to Madagascar and Kenya, and a social-justice leader serving migrant populations in Monterey, Mexico. On Tuesday evenings a loose-knit group occupies a table at a burger place near campus for some communal relaxation.

Back at the podium facing a dozen aspiring journalists, White provides a glimpse of the other side — to be the spokesperson, representative and gatekeeper deftly dueling with reporters seeking information and insight. Speaking on and off the record. Figuring out how to handle this problem and that revelation. Credibility and cultivating relationships. How explosions are not just heard — but felt.

Questioning turns more personal, too. “What was your first week in Damascus like?”

A student who asks how White joined the foreign service receives a staircase of steps detailing the process — written examinations, interviews, security clearances, medical exams. She astutely follows up with why? He was, he says, looking beyond his life as a lawyer and thought he’d like to represent the United States and travel around the world with his family. A series of questions follows: ages of children, the effects of all the moving around, the languages learned, favorite places to live.

Finally, a student asks if he may probe White’s thoughts in a “lightning round” on Iraq and Israel, the Palestinians and Kurds, Hamas and Hezbollah, the Christians in Egypt, Syria and Jordan, all in a kind of rapid-fire volley. To which the career foreign service officer responds with interesting insights into the complexities of the Middle East . . . without saying too much.