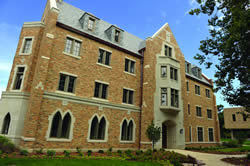 Providing childcare at a crowded orphanage in the western African country of Senegal during the summer of 2009 “challenged and changed me personally,” Kaitlyn Kiger ’11 says. “I was blessed to be a vessel of love for two months — holding, comforting, feeding, changing and giving the babies a chance to get out of their cribs and walk and play.”

The Notre Dame student says her International Summer Service Learning Program (ISSLP) experience through the Center for Social Concerns “was a chance to learn about poverty and development in the classroom of the world. It strengthened me in faith, hope and love.”

Such opportunities to combine a broader grasp of the world and a deeper grasp of religious values have opened up to more Notre Dame students in recent years. That’s because donors to the Spirit of Notre Dame campaign have given generously to two academic engines that make such connections possible. Contributions to the Center for Social Concerns and the Institute for Church Life, whose joint goal totaled $18 million, had reached $43 million as the Spirit Campaign entered 2011, six months from the campaign’s finish line.

“Our international program will have grown by 50 percent during the years of the Spirit Campaign,” says Rev. William Lies, CSC, executive director of the Center for Social Concerns. Its service learning programs in Africa, Asia and Latin America have grown in popularity, and recent contributions have increased the travel possibilities despite high costs. Indeed, Lies says, the center has been able to develop community-based service learning courses at many of Notre Dame’s study-abroad sites in Europe, too.

Additionally, says Lies, “We have been able to foster the integration of Catholic social teaching principles throughout the campus in a way we weren’t able to before.” Campaign support made possible the expanded funding of an administrative position focused on the Catholic social tradition. An academic minor studying that tradition has grown in enrollment from a handful to some 50 undergraduates.

Perhaps the clearest sign of integration springing from the Spirit Campaign is the building that houses the Institute for Church Life (ICL) and the Center for Social Concerns, as well as the offices for the academic minors in Catholic social tradition and in poverty studies, and other kindred organizations. The building is Geddes Hall, crowning the site of the Center for Social Concerns’ former TV-station home. It was the biggest line item in that $18 million campaign goal.

Bringing together the Center for Social Concerns and the Institute for Church Life, says ICL director John Cavadini, embodies what Pope Benedict XVI expressed in his encyclical, Deus Caritas Est. The pope points out that Church life classically involves three functions — celebration of the sacraments, proclamation of the word and service to the poor — “and they’re intrinsically united,” notes Cavadini. As one enters Geddes Hall, the English translation of that encyclical’s title can be seen engraved overhead, inviting visitors into that unity: “God is Love.”

Visitors to the building have been plentiful. It has been a leading place of outreach and hospitality since it opened in 2009, attracting partners of all sorts, including a growing number of organizations serving the poor and marginalized in the South Bend area. Continued growth in opportunities and needs prompts both Cavadini and Lies to note their reliance on benefactors’ generosity extending far into the future.

“We’ve been able to be on the cutting edge of community-based research largely because of the Spirit Campaign,” says Lies, whose social concerns center nurtures relationships with some 50 organizations, from AIDS ministries to the YWCA. “We put the University research at the service of those community agencies that work with professors and student groups to investigate the very important issues they need research on.”

The Institute for Church Life has taken its own approach to putting Notre Dame research capabilities in the service of community organizations — in this case, Catholic dioceses and parishes around the country. It is partnering with the Center for the Study of Religion and Society, whose director is noted sociologist Christian Smith.

“We hope to offer absolutely first-rate theological research that helps bishops and parishes decide on priorities,” Cavadini says. “What are the catechetical needs they face, where should they put their money, where should they hire?” Consultants and survey-takers don’t necessarily “get it” when addressing theological and pastoral concerns, so parishes “may not always have what they feel is authoritative guidance on their needs,” he adds.

That’s the kind of initiative he is planning to bring about through collaborations around campus and beyond. The Spirit Campaign has helped build a sturdy launch pad for initiatives by establishing an endowment for Cavadini’s ICL post — the McGrath-Cavadini Directorship.

“We have a renewed sense of confidence based on a sense of stability and a sense of room for growth,” says Cavadini. As director, he was able to supplement a President’s Circle initiative that created the position of coordinator for University Life Initiatives. When Mary Daly ’10 inaugurated that post, fulfilling a recommendation of the University’s Task Force on Supporting the Choice for Life, she was able to take an office in Geddes Hall. The task force, convened by President Rev. John I. Jenkins, CSC, in September 2009, was co-chaired by Cavadini.

There is no shortage of ideas being hatched in the institute director’s office. The Notre Dame Initiative on Spirituality in the Professions is up and running, with Brother Robert Sylvester, CSC, heading a program to provide spiritual care to lawyers.

All the programs of the Institute for Church Life and the Center for Social Concerns “emphasize service to the Church and to mankind” and together constitute “a critical part of the mission of Notre Dame,” says Daniel Reagan ’76, associate vice president for University relations. They’re benefiting from a powerful message visible in the Spirit Campaign — “a desire by the University and our constituency to see the Catholic character of the place always nurtured.”

That desire is carried out every day by all sorts of Notre Dame people and enterprises, Reagan says. They range from the Alliance for Catholic Education to the Haiti Program to the Theology Department’s new Master of Sacred Music program to the recruitment of pre-eminent professors committed to the University’s Catholic mission. But the Spirit Campaign highlighted how the Institute for Church Life and the Center for Social Concerns together fit that desire to a T, says Reagan. “It’s a real testimony primarily to Father Bill Lies and John Cavadini.”

Of course, the ultimate aim for the donors and administrators alike is to serve and educate the students involved in all the programs. “We’re forming them for witness,” Cavadini says. “We’re very much interested in education unto witness.”

He cites examples like his Institute’s Notre Dame Vision program, a summer camp-type experience for high school students that helps them to think about their lives in relationship to the Catholic faith and God’s call to live as witnesses to that faith. About 65 Notre Dame undergraduates serve as counselors in that program. The Satellite Theological Education Program (STEP) offers an online curriculum in theological formation for lay ministry and continuing education for all ministers in the Church. Also, the two-year service program called Echo trains master’s degree students to assume positions of catechetical leadership in parishes, dioceses, campus ministries and high schools.

John Paul Lichon ’06 completed Echo in 2009 and is now director of Catholic campus ministry at Southern Methodist University in Texas. “Notre Dame is leading the way with offices like the Institute for Church Life and, in particular, the Echo program,” he says, adding that catechetical ministry meets “a dire need” in the Church. “Many people are looking towards the ICL and Echo to see where Notre Dame will be leading us next.”

Lies agrees that that’s what Notre Dame is all about: “We want to be a university that is a resource to the Church and to society.” Such a vision that extends to the whole world has transformative effects in the classroom, he says. “Students become inspired by the synthesis of faith and action.”

Ann Marie Ferry ’11, who has participated in several service learning endeavors, including the Migrant Experiences Seminar in Immokalee, Florida, says Notre Dame is a resource for transformation. “The trend that people are becoming aware of social issues all over the world is great, but the Center for Social Concerns’ vision — to engage in discussion about why this is happening and how we as students in South Bend can be in solidarity with those we meet in Immokalee — is what makes this institution especially unique and effective.”

Cavadini says one word, wisdom, describes what students are looking for and what Notre Dame offers: “Wisdom is more than knowledge. It’s inherently connective of disciplines and inherently both theoretical and practical.” Students are seeking ultimate truth, he says, and that requires an orientation toward the mystery of God’s love. That’s what brings all studies together, just as the proclamation that “God is Love” helps to unite all the different pursuits in Geddes Hall.

Resources from the Spirit Campaign that underwrite future initiatives of the Center for Social Concerns and the Institute for Church Life are a good investment in wisdom and witness, says Cavadini. “It’s strengthening not just Notre Dame but the Church.”

William Schmitt is the communications/media specialist of the Institute for Educational Initiatives/Alliance for Catholic Education at Notre Dame.