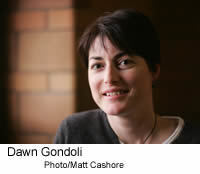 Notre Dame Magazine: For many mothers and fathers, the two scariest words in the English language are “adolescent children.” Why do so many parents view the approaching adolescence of their children with fear and loathing?

Gondoli: One reason is that the culture perpetuates negative stereotypes of the transition from late childhood to adolescence. Just the other day, for example, while I was browsing parenting books at Barnes and Noble I noticed they all had titles like Surviving Your Teenager _and Yes! Your Teenager _ Is Crazy_. In our study we’ve found that many mothers do, in fact, dread the parenting transition from childhood to adolescence. They think, ‘OK, things are fine now, but just wait: It’s going to be terrible.’ My reply is, ‘Relax. If things are good now, they’re very likely to be good in the future.’ In fact, it’s important that things are good before the transition. That will get you a long way through it.

NDM: Someone once said the trick in raising children is to have high expectations and to instill the notion in your children that they can meet those expectations, that you really believe they are that good.

_Gondoli: Right. Some mothers, I think, deprive themselves of their own expectations of success. There is this dread, fostered by the culture, that the child will change and the mother won’t know who or what that beast is.

NDM: Have you found any difference between mothers who did well with the transition and those who did not?

Gondoli: Virtually all of the mothers have reported some anxiety over the transition. Where they differed was whether they also felt joyful, had positive feelings about the impending move to adolescence. Those mothers who described themselves as “excited,” “proud,” “enthusiastic,” “interested,” generally had better parenting after the transition. It seems a self-fulfilling prophecy may be at work here. Getting in touch with the exciting, wonderful aspects of your child’s transition to adolescence and increasing competency is beneficial to parenting after the transition.

NDM: Parents always seem to be a step behind their children. By the time we have them figured out at one stage, they’re on to the next.

Gondoli: Exactly. That’s the nature of child development. Children are catalysts for change, and in early adolescence there’s a great deal of change. Parents often are slow to adapt, and often that results in conflict. All of a sudden you’re having arguments over things you never argued over before. Moms and dads are often confused about how much adaptation is necessary over permissiveness/freedom issues. Kids are pressing for freedom, and you realize that they need that, but you don’t want to go overboard in allowing them to make all of their own decisions.

NDM: Why is it so hard to deal with teenagers?

Gondoli: Well, they know how to push all those hot buttons. It’s their job to push for more freedom, and it’s the parent’s job to negotiate that. There’s a lot of day-to-day negotiating that needs to happen in parenting adolescents. It’s not a piece of cake.

NDM: Based on your knowledge and research, what’s your best advice for mothers and fathers of soon-to-be teenagers?

Gondoli:_ Stay calm. The thing to strive for is ‘authoritative parenting.’ What that involves is being warm, being involved with your child, being child-centered, showing concern for your child’s point of view, fostering your child’s autonomy where appropriate and maintaining high and rather firm expectations for behavior. Of course, it’s easier to describe that than to achieve it, but it’s that blend that is so good for kids.

I think it’s important to establish the authoritative pattern before the teen years because the social situation hasn’t changed yet, as it will. Teenagers have more structural autonomy than younger children so you may no longer know all your teenager’s friends or teachers. They’re permitted to go places and have experiences without you. If you have a basis for understanding your child’s life before that happens, it will be much easier.

NDM: Any final words of advice?

Gondoli_: Be optimistic. Enjoy your children.