Those of us in the audience sit in a ring of desks in a dark room when suddenly the actors begin to chant: “There’s no power like the power of the people, because the power of the people don’t stop.” They climb into the audience and sit in the desks next to us, incorporating us into the scene they’re setting: a Chicago Public Schools protest. Later, we’re students in one of the classrooms struggling to deal with enlarged class sizes, poor scores and safe zones that are less than safe for children walking through them to get to school. The audience is enveloped in the intimate setting of the play, exactly how Forgotten Future was designed.

The state of public education in Chicago is a weighty topic for a theater company, but it isn’t the first for Collaboraction, a Wicker Park-based group led by Anthony Moseley ’95. Two years ago he decided to overhaul the mission of the 27-member company and insisted on putting community issues into the crosshairs for observation and conversation. 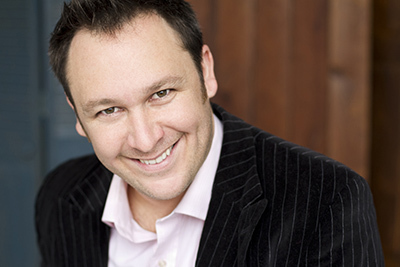 Moseley’s conversion into the theater world is worth a conversation itself: After graduating from Notre Dame with a finance degree, he sold sponsorships and program and urinal ads for the Chicago Bulls. When that drained him, he moved to selling mutual funds and group insurance, but he still wasn’t satisfied.

“I had my quarter-life crisis and decided to pursue my passion, which was always acting but also celebrating and exploring what it means to be human and how we can do it better,” the scruffy and gregarious Moseley says. “I think art is a thing that humans can do that really leads to innovation and growth and is really the front line of change.”

He quit his job, became a barista at the Artist’s Café on Michigan Avenue and took acting courses at the Steven Ivcich studio before landing a role at Collaboraction in 1999. He was promoted to artistic director shortly thereafter. “I started to see that I was the only artistic director who knew how to balance a budget and manage people, and who had a solid foundation of how to do marketing and really push the business side,” he says. “There are a lot of artists who hide from those responsibilities.”

In just a few years, Moseley established Collaboraction as a nonprofit company. The acting ensemble started doing work for hire, including an annual event called “After Dark” with the Art Institute of Chicago. It threw multimedia events and parties for thousands of people in order to pay rent and eventually was able to secure its own theater. Moseley helped Collaboraction establish a tribe of loyal followers but also created strategic marketing tactics to build a diverse audience, which he calls “the funky family reunion,” to facilitate the richest discussions.

To get young adults into the theater, Moseley knew he needed to venture from the traditional. In 2000, he created the Sketchbook festival, hosted by Collaboraction, which brings together more than 150 artists, DJs, playwrights and actors each year to put on a series of short multimedia vignettes. Or as he describes it, “Like an art rave without drugs and alcohol. It’s high stimuli. It’s an environment that makes you feel alive.”

The growth and projects kept Moseley busy for nearly 15 years, until he decided it was time to take on something bigger. The theater scene in Chicago had exploded in the early 2000s, and suddenly the city went from 100 to 400 theater companies doing similar bits, so it was time to carve a niche for Collaboraction.

“We needed to do theater that was singular and could only be made by Collaboraction,” he says, adding, “What theater can do that TV and film can’t do is to bring people together in a room and really give them a communal experience and be really time- and space-sensitive.”

Thus, the new mission was born. Looking at some of the most pressing social issues, Moseley decided to start with crime and segregation in Chicago. Crime Scene: A Chicago Anthology, a docudrama-style piece written by Moseley, incorporates actual newspaper articles and their online comments, original interviews and excerpts from social media to weave a cohesive reflection on violence and segregation in Chicago. It sold out its eight-week run in the theater in February 2013 and was then performed for the next two summers in the most violent neighborhoods of the city for the people most affected by the problem.

“Crime Scene is turning into a movement,” Moseley says. “We have these traumatized communities that need healing, they need jobs, they need opportunities. . . . What I’m trying to do through the work with Crime Scene is to get more people to activate and become a part of the solution. There need to be more boots on the ground.”

Moseley has put boots on a new teen ensemble culled from those neighborhoods most affected by crime in conjunction with After School Matters, a Chicago nonprofit organization. The teens are paid to come to the theater to learn and alter the script before bringing the play to public performances. The hope is that by addressing the violence through the teens’ insights and empowerment, it can be curbed.

Moseley was careful not to write Crime Scene as a traditional play. He wanted it, and all of Collaboraction’s original offerings, to appeal to young adults, so he added interactive social and digital components. The social component starts with a bar-atmosphere in the eclectically furnished Salon room, where audience members can mingle before entering the theater, and ends with a town hall discussion. Some shows involve audience participation during the play as well. Digitally, a screen displays film clips, statistics, pieces of art and real text conversations during the play. In the case of Forgotten Future, written by Sarah Moeller, a lengthy list of Chicago schools that have closed due to budget cuts scrolls on the screen during one scene.

Since then, in addition to Crime Scene and Forgotten Future, Collaboraction has put on This Is Not a Cure for Cancer — part memoir, part comedy, part drama that paid tribute to Moseley’s father while discussing the challenges of cancer diagnoses. Now, Moseley is writing a piece called Family of War, which digs into the unintended costs and wounds veterans and their families bear.

Moseley is excited about the outreach opportunities that could come from this new play. In March the company will host public readings and discussions at veterans’ organizations, military bases, libraries and schools before setting the play on stage in May. Likely the new production will dig into Moseley’s memories of his veteran dad once again, in addition to those he gleans from the public. Those personal bits, he says, are what make a play successful.

“My philosophy is that any piece of art is only as good as the artist’s willingness and ability to share themselves.”