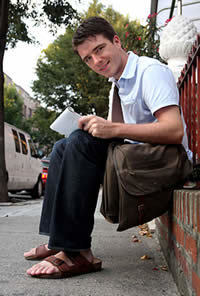 It all began with music and admiration. Long before Ryan Cunningham ’02 was writing musicals, he was looking up to his older brothers, Kevin and Thomas, as they played piano and sax at the Saint Joseph Summer Theatre in Needham, Massachusetts. He knew he didn’t quite have their talent for instruments, but he diligently built sets for Kiss Me, Kate at the theater, eventually earning a chance to perform in the cast of Oliver!

But his writing, he realized, was where he could contribute the most to a show, despite never fully giving up the acting bug. Encouragement from a fellow Notre Dame student didn’t hurt either. “I met Tommy Curtin [ND class of 2003] at our student-run musical company, and he asked me if I wanted to take a crack at doing a musical,” Cunningham recalls. “We came up with Chance At Love, and it was a hit on campus.”

The musical, which centered on the dating exploits of three best friends, was admittedly raw, says Cunningham, but provided enough encouragement to expand from South Bend in 2001. “We hopped into two cars and performed at friends’ high schools in Minnesota and went all over the Midwest. It was a formative experience to write your own show and then see where it can go.” It helped Cunningham go all the way to New York University.

“I applied for a master’s in musical theatre writing,” he says. “The first year you write with a different composer every week, a song every week. I was paired with Josh Salzman, who I write with to this day. He had just gotten engaged, and I had just gotten out of a relationship, so we wanted to look at how to get from where I am to where he was in modern-day New York.”

Cunningham recalls a friend saying Jane Austen’s Pride and Prejudice could be a strong starting point, so he and Salzman updated it and reversed the gender as part of a second-year thesis. “We messed with it so you can’t even tell it’s Pride and Prejudice anymore. I just loved its message of getting over your own pride and prejudice and learning to love someone for what you will judge them for, not in spite of it.” 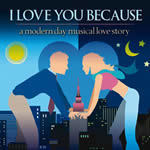 The attempt would become I Love You Because, which would go on to be performed more than 100 times at the Village Theater in Manhattan and be nominated for a Drama Desk award.

“We got it to Jen Maloney [producer of musicals Spring Awakening and Legally Blonde ] and she took it under her wing, and it went off-Broadway in winter 2006. The New York Times gave it a good review, and even though February is a tough time for musicals it did well. We recorded a cast album and got licensing deals with theatrical rights worldwide. It’s been done in Germany, London, Korea . . . just exceeded our expectations completely.”

What got Cunningham even more was the personal reaction of the audience to the message. “It’s a more mature message of looking for love in New York City,” says the Brooklyn resident. “Finding the right circumstance for love, the idea that people aren’t not getting together because of situations but because of their emotional states. The characters may not know they’re loved, but that’s not the problem. They block themselves from knowing — now that’s a problem.”

Cunningham is quick to admit the story was poached greatly from his own experience, as much as Austen’s book. “I was all over the place at the time I was working on it, and there’s a lead guy named Austin who has an idea of what his life will be, and the rug gets pulled out from under him when he walks in on a girlfriend cheating on him,” he says. “After getting out of this relationship and having a cynical view of what romance is, there’s the idea [that] whatever you do, always be indifferent to women and never say ‘I love you.’ It’s the closed-off way many people choose.”

His aforementioned partner and composer, Josh Salzman, is most taken aback with the sensitivity Cunningham takes to the characters. The themes of his work have their say, but not at the expense of the piece. “He lets the lyric and scene grow from the character,” Salzman says. “To him, it’s about being honest while being witty and heartfelt. He’s about being funny without poking fun at the material. More than anything he tries to find themes which relate to everyone.”

This balance is never stronger than in such I Love You Because songs as “What Do We Do It For?” which combines romantic longing with quick punch lines. A sample:

NY MAN
Don’t I know it.
I’ve searched this whole island
Queens and Brooklyn, even Hoboken
But for some of us
Our only true guarantee
Is that our hearts get broken

NY MAN
I got on the wrong train.

Or the lyrics that follow about passing a note to a first-grade girl, only to have her write back that things are moving too fast. By Salzman’s assessment, Cunningham’s idea is that you might get your heart ripped out but you still need a sense of humor about it — if only so you’ll be willing to risk getting it ripped out again.

Even though Cunningham reflects on romance through his work, he doesn’t try too hard to make it hold up as advice but rather as a reflection of our own struggles. “I don’t think giving advice on dating is the best idea in the world,” he says. “When it works out, they rarely remember you helped them. When it doesn’t, you’re the first one they blame. . . . I don’t need that over my head!” he says with a laugh.

Still, despite his own disappointments in love and occasional cynicism, ultimately, Cunningham believes his work comes from the opposite and will continue to. “My parents have had an excellent relationship for more than 35 years — never seen them fight. Both my older brothers are married and one lives very close to them. They all inspire me.”

Strangely, where Cunningham’s personal life goes, he predicts, could come from any or all of his future work. “I asked my sister to make sure an actuarial character I created was accurate because she’s good at math. Today, she’s an actuary. I wrote a character based on me who falls in love with an artsy-type woman. Not long after, I did. . . . Whatever I write going forward, I’ve learned one thing: be careful!”

Though Cunningham isn’t too concerned about becoming the Queen of Persia, he and Salzman did follow up I Love You Because by being commissioned through the Kaufman Center in New York City to write Queen Esther_, a story based on the holiday of Purim. Cunningham reveled in the balance between songs of longing, such as “When I Am Queen,” and simple laughs, as in the gregarious instruction of pulling udders in “Milking The Cow.” (See Cunningham perform the duet on s">youtube).

He’s also teamed with Salzman to create songs for the Disney Channel’s Johnny and The Sprites_, which relied usually on such Broadway greats as Sutton Foster (Thoroughly Modern Millie_) and Stephen Schwartz (Godspell).

Cunningham does wish for his future work to reach Broadway but only if the material warrants it. Some creations he only envisions in subtle staging and smaller crowds, even if that means leaving the Tonys for someone else.

“For example, we’re working on something right now that’s fairly intimate for that big a stage. We’re looking at people in their 20s who’ve spent their time trying to discover themselves, but that time is ending. It’s called Next Thing You Know. In many ways it’s a New York story — do I stay in this amazing and sometimes difficult city, do I leave it — but it’s also about anyone with their 30s coming up and having to figure out what to do now.”

Sounds like a familiar question for the 29-year-old Cunningham, and, maybe, he’s just the right person to answer it.

Eric Butterman is a Dallas-based writer who’s previously written profiles on producer John Walker and musician Anne Heaton for this magazine. Contact him at ericbutterman@yahoo.com.