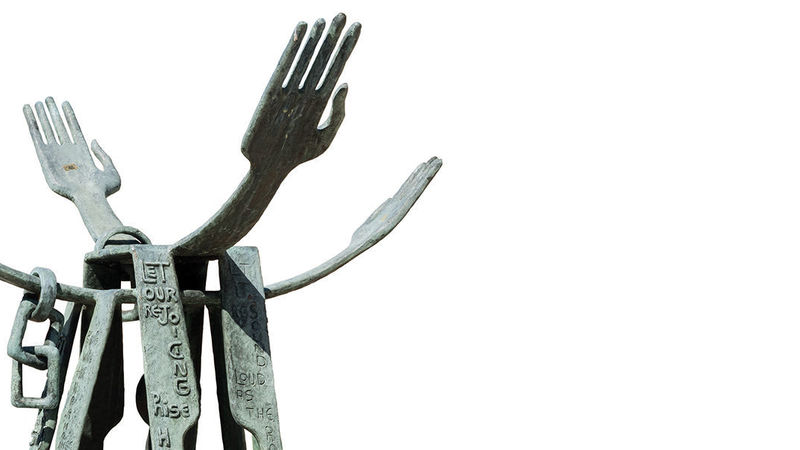 Frank Hayden’s art was of its time and timeless, attuned to current events and to eternity. Closely associated with the civil rights movement, he created sculptures in honor of those who bore the crosses of that struggle, as well as actual Church-commissioned crucifixes — an American Black Catholic artist in a time of civil and spiritual unrest.

Above all the labels that could be affixed to him, Hayden ’59MFA defined himself first and foremost as a sculptor. Sometimes, his friend Percy Pierre ’61, ’63M.S. relates, Hayden wished he could live in a hole away from the distractions of the world, handing up each new piece “to somebody who would take it and give him a loaf of bread, and he’d go back and do his art again.”

Such simplicity forever eluded him. The unavoidable cultural ferment became material, as much as the wood and aluminum, plaster and fiberglass that were his chosen media. As outgoing in personal relationships as he was inward-looking in his artistic imagination, Hayden combined the two impulses, talking and working, working and talking, steeping his art in the issues of the day and the stirrings of his soul.

Among the few Black students on campus in the late 1950s, Hayden and Pierre overlapped at Notre Dame but did not meet during those years. Hayden was getting a master’s degree under celebrated Croatian sculptor Ivan Meštrović and Pierre was an engineering undergraduate. A mutual friend, Leonard Price ’62Ph.D., introduced them in 1963 and Hayden encouraged Pierre to teach at Southern University in Baton Rouge, Louisiana, where the sculptor had begun his own academic career.

They lived in a bachelors’ barracks on campus. Many afternoons, a group gravitated to the gregarious Hayden’s room, discussing the civil rights protests progressing throughout the South and the March on Washington planned for that summer. Hayden, who would later become one of the first sculptors commissioned to create public art in tribute to Martin Luther King Jr., expressed a militant sentiment to his friends at that time. He supported the more aggressive approach that Malcolm X advocated in contrast to King’s nonviolence.

“Now, Frank was always working,” Pierre says. “We would be sitting around his room, four or five of us, and Frank would be drawing. And what he drew was a product of that conversation.”

Those drawings were published in a 1967 volume of poet Mariana Scott’s verse, Sketches in Black and White. They were complementary images that “reflected the same mixture of anger and angst as the poetry — elements that had not appeared openly in Hayden’s art before,” art historian Darius Spieth writes in an essay on the sculptor’s life and work.

Spieth, a Louisiana State University professor, delivered a lecture last winter about Hayden at Notre Dame’s Snite Museum of Art. From an artistic standpoint, the professor said, Hayden “is the foremost African American sculptor” of the civil rights era. An exhibit commemorating his work runs through January 3 at the Louisiana Art & Science Museum in Baton Rouge — the state capital where he remains, Spieth says, “the most publicly visible artist.”

In addition to many works for Catholic parishes, Hayden created a local landmark, “The Red Stick,” a 36-foot depiction of the rod used to mark tribal hunting boundaries that French explorers used to give the area its name, “Le Baton Rouge.” Hayden was also commissioned to create what has become a local icon, a monumental bust of Oliver Pollock, an Irish-born merchant who settled in Louisiana and became a Revolutionary War financier.

Other works by Hayden, who died in 1988, have a persistent contemporary resonance. His “Lift Every Voice” sculpture on the Southern University campus, was created in memory of Denver Smith and Leonard Brown, two students killed by police during a 1972 campus Black Power protest. The current Hayden exhibit, which is named for that piece, was curated before George Floyd’s death at the hands of police, but took on added relevance this summer as unrest over racial injustice erupted anew across the nation.

Although the artist was in demand as a sculptor of the civil rights movement, Hayden’s sometimes abstract, midcentury-modernist style did not always win admiration. In New Orleans, for example, the first major city to commission a memorial to King, the 1976 unveiling of Hayden’s sculpture prompted gasps from an audience expecting to see a realist depiction.

“Hayden opted for a symbolic homage to King in the form of an ovoid sphere from which emerge outstretched hands that approach each other in gestures of greeting and reconciliation,” Spieth writes. The figure, derided as “the egg,” includes inscriptions from famous King speeches visible on the inside of the hollow shape.

Hayden carved words into many of his works, reflecting the influence of time he spent studying in Germany and Scandinavia on a Fulbright and other prestigious scholarships. His sculpture also incorporated the wood favored in those countries, especially mahogany, adding warmth to the sleek, cold designs ascendant in the midcentury style.

Notre Dame’s Meštrović also had a major impact on Hayden, who was denied admission as an undergraduate — he attended Xavier University in New Orleans instead — before being accepted to the graduate program in art. When Hayden arrived at Notre Dame, Meštrović was a 73-year-old charismatic legend known as “Maestro” to his students.

Spieth points out that, like his mentor, Hayden incorporated conventions like “stacking up” figures to represent large groups. Mirroring Meštrović, Hayden likewise produced many monumental pieces of public art — although he was also known to give away countless tabletop sculptures to friends who stopped by his studio.

Perhaps Hayden’s sensibility itself was what most aligned him with his teacher. Both men had humble upbringings — Hayden in a Memphis housing project, Meštrović in rural Croatia — experienced political upheaval in their homelands, shared a religious affiliation and considered art their life’s calling.

And Hayden, like Meštrović before him, drew on personal experience, the tumult of his times and his religious faith to depict grand themes of human tragedy in solidarity with the suffering.

“His approach to sculpture had a lot to do with a very profoundly humanist outlook. He was very deeply rooted in Catholic faith. He’s a great representative of midcentury modernism,” Spieth says of Hayden, “yet there’s something very traditionalist about him.”