When Meredith Sheperd ’05 looks at a plot of land no bigger than a table for two, she sees space for 35 different crops. She gets downright excited picturing kale for juicing, mint for cocktails, and carrots for healthy eating and attracting butterflies. 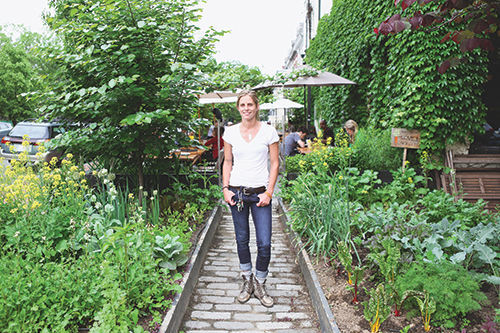 Sheperd was biking around Washington, D.C., to job interviews when she decided a few years ago to grow more than organic produce. She grew a business.

“Look at all the places you could grow food here,” she remembers thinking. “It seemed like all these people have great yards and should be using them to grow food.”

In 2011 she started Love & Carrots, an “urban farming” company that installs and maintains organic gardens for businesses, schools and individuals who have more interest than time for growing healthy, sustainable food sources.

“She just took it over and made it incredible,” says Stu Davenport of the garden Sheperd oversees outside his D.C. restaurant, Big Bear Cafe. So many things bloom during the growing season, he says, that the garden is like “slow-motion fireworks.”

Sheperd had been the kind of kid who worried about the destruction of the rain forest and was curious about how things were connected in nature. When she slams on the brakes during a bike ride, it’s likely to be to listen to the song of a favorite frog or watch an osprey swooping toward its prey.

Sheperd’s training started young — growing up on a 150-acre sheep farm in Vermont, where her mother recycled and re-purposed old grocery bags “before it was cool” and her father was a country guy who instilled a love of nature. 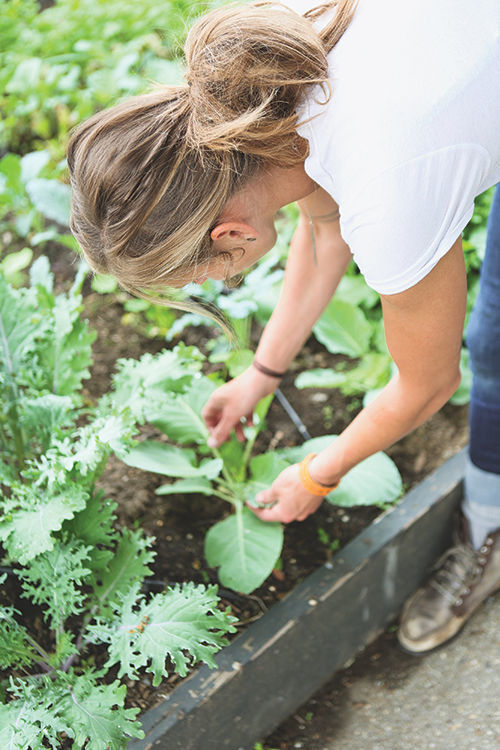 “It grew out of my appreciation of camping, fishing, catching frogs — the kind of things my dad wanted to do,” says Sheperd, 30, a blue-eyed blonde who has no need for makeup.

Gardening then was a chore, not something she thought you could make a career of. At Notre Dame she majored in environmental sciences and fell in with a “crunchy” crowd of Ultimate Frisbee players. She graduated with plans to become an ecologist or some other type of researcher and found a job working with Penn State professors in Costa Rica, spending quality time with a fungus that lives symbiotically with tree roots.

It wasn’t the wasp nest in her bedroom or the scorpion that lived in her bathroom rafters that turned her off of the academic life. “I realized I didn’t want to be researcher because it was a lot of monotony,” she says.

So she started seeing the world, including Hawaii and Mexico, working on organic farms and reading up on environmentalism and the concept of permaculture, which involves respecting natural ecosystems and thinking long term about the Earth. She also spent several winters in Guatemala, teaching orphans about agriculture and how to expand their diets beyond rice and beans.

“I started to see food and what you eat as a daily decision and a way to impact the environment positively,” says Sheperd, whose silver nose ring matches her simple hoop earrings. “Our food system is broken. It’s unsustainable. It hurts the environment — all the chemicals we spray on crops go in the river.”

When she returned to the East Coast in 2006, Sheperd ended up running Chailey Farm, training that became a sort of graduate school of real-life learning. The Virginia farm supplies high-end Washington restaurants, and the chefs were like professors grading on a steep curve. They taught her to plant interesting crops and to pay close attention to how foods were grown and harvested for maximum flavor.

All her bike rides around D.C. convinced her there was plenty of potential for urban gardening, so she started with a garden for a neighbor and has put in 140 gardens, with the help of six other staff members and three interns. Her clients include doctors, lawyers, politicians, four restaurants, a health center and a retirement home. For the 85 clients whose gardens Love & Carrots maintains, her crew takes photos of what has been planted and emails reminders about what’s ready to eat. “Sometimes it’s a couple of pots on a window sill, other times they have an expansive yard,” she says.

Katie Cleary ’02, a television producer in D.C. and Sheperd’s girlfriend, is impressed by how Sheperd has built the business up so quickly. “She’s someone who really knows what she wants and is smart enough to make it happen.” 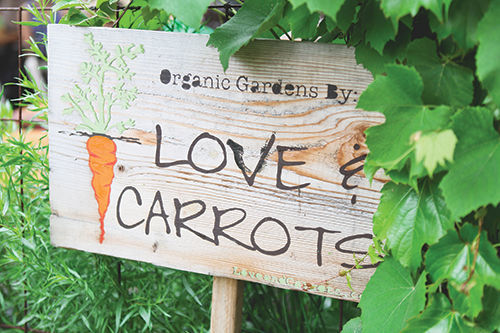 At the Big Bear Cafe, less than two miles north of the Capitol, the gardens in late March are unpromising dirt to an untrained eye. And the particularly brutal winter has killed off much of Sheperd’s work. But she sees the coming blooms she will bring from that dirt — lavender and leeks, arugula, sage and much more. And maybe the cold also killed off some of her nemeses — pests like the squash vine borer.

She’s got a headquarters just outside of D.C. where she can build bee hives and garden borders, start plants in a greenhouse for clients, and grow her own tasty produce. Sheperd skis during the winter, and finds time for biking, camping and dining with friends.

In three years, Sheperd has built her business by using word of mouth instead of a marketing budget — the vegetables clients share with their neighbors are the best advertisement. She’s thinking of capping her residential maintenance clients to spend more time working with schools, nonprofits and other commercial clients where her impact can be greater. She’s particularly interested in guiding schoolchildren. “It’s a broader net. I’m teaching them how to garden and what a joy it can be, getting them active outside,” she says. “When a kid grows a radish, he will eat the radish.”

Children, she notes, often know more about gardening than their busy parents. And a crop of environmentally conscious kids is a crop the world could use more of.

“I see her being the person to figure out a better way to do things,” Cleary says. “We’re lucky she does it for the Earth.”

Tamara Lytle is a freelance writer in the Washington, D.C., area.