On the wall in a classroom of the George Washington Carver School, in a village in the Haitian mountains so remote that the nearest rugged road lies a two-hour walk away, hangs a framed photograph of a quiet mother of six from Milton, Massachusetts, whose life was so large and open-hearted that memorial services after her death were celebrated in two countries. The photograph was taken in 2012. The woman’s name is Sheila Becker Gailius.

Preserved in at least a few cell phones in that suburb of Boston is another photograph. This one shows a young man and a young woman, their shirts soaked and faces gleaming after a day’s hike in the searing Haitian sun. This photo was taken in 2014. Tim Gailius ’15 and his sister Caroline stand on either side of Sheila’s portrait at Washington Carver, awed that their mother’s brief visit there two years earlier had made such an impact on the village and its children.

Today, dozens of solar lanterns hang at night in the children’s homes. During the day, the children charge them at school with electricity generated by four solar panels that a team from the Let’s Share the Sun Foundation — an Albany, New York-based organization devoted to the spread of solar power in Haiti — installed on the roof.

These lanterns provide the first electric lights to appear in this village. Each orange lantern has a USB port for charging cell phones — vital lifelines in this out-of-the-way place. And each is inscribed, “In loving memory of Sheila Gailius.”

It’s as if the Creole-speaking French teacher were still there, offering the same renewable gift of illumination she had shared with her own children and the students at Boston College High School throughout her adult life.

The story behind the photos and the lanterns begins in that summer of 2012 with a simple act of kindness. 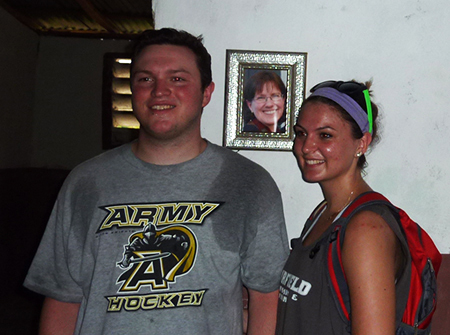 Sheila and Caroline hiked to Washington Carver together with other volunteers on Let’s Share the Sun’s annual mission trip. They planned to spend the afternoon at the two-room school, visiting with the children and servicing the small solar array on the roof. But it rained that day, Caroline recalls. “An absolute downpour.” The kind of prolonged tropical squall that threatens real danger.

Children were frightened. But Sheila Gailius, accustomed to calming boisterous dinner tables and defusing agitated classrooms, was in her element. If she had arrived as a stranger, she now reached out as a friend, a teacher, a mother. She moved from one room to the other hugging and holding children, sharing her sandwich, consoling the group using the solid Creole she’d picked up in Haiti 20 years earlier and had practiced with Haitian students at BC High.

Here was something besides electricity many of these children had never seen before: A blan who could speak their language. And it worked — Sheila’s instinctual act of mercy set an example the other volunteers could follow. The children settled and the storm passed, the villagers and volunteers bid their farewells, but a bond had formed and would remain.

During the same trip Sheila told her friend, Nancy Brennan Jordan ’85, Let’s Share the Sun’s founding director, that her return to Haiti was a homecoming, something she could check off her bucket list. Ever since her first visits in 1990 and 1991 she’d carried Haiti in her heart, working with Haitians and other immigrant groups on education access, scholarships and ESL programs at her Catholic high school on Boston’s south side.

But “bucket list” caught Nancy’s attention. What do you mean, ‘bucket list?’ she thought. We’ve got a lot of life ahead of us.

It is unlikely Sheila meant anything more than an expression of heartfelt gratitude. But nine months later, in May 2013, she collapsed at home one Sunday afternoon while most of her family was out at a Red Sox game. Unable to breathe and overwhelmed with pain, the spaces around her lungs were filling with fluid. She returned home from the hospital one week later and soon learned what she was up against: stage 4 ovarian cancer.

That year, Sheila’s family, her school and lifelong friends rallied, returning to her the kind of care she had always lavished upon them. Her husband, Gilbert “Gib” Gailius ’85, a BC High Spanish teacher, managed this “incredible” wave of love. Tim, their oldest child, took a leave of absence from his junior year at Notre Dame to care for his mother so Gib could keep teaching and supporting the family. Jean Nolan ’85, who had served two years in Chile with Gib, Nancy and Bill Jordan ’85 as Holy Cross Associates, set her own life aside to provide meals, childcare, errands and rides for the younger Gailius kids.

Sheila died in March 2014. More than 1,000 people attended her wake and funeral at BC High. Many brought solar lanterns decorated in their beloved teacher’s honor.

Bill Jordan calls the Gailius family “co-founders” of Let’s Share the Sun. In 2010, when Tim, then a rising senior at BC High, won a $5,000 scholarship to research a topic of his choice, he chose solar power. Gib steered him toward the Jordans, who were just getting their foundation started. The three men traveled to Haiti together. While Bill scouted sites for projects, Tim made a video about solar’s potential to boost the country’s reconstruction after the 2010 earthquake.

The lanterns at the wake were Gib’s idea. Sheila had never liked flowers as an expression of condolence anyway and the Gailius house had been filled with them for a year. Instead, the couple asked for donations of solar lanterns to Let’s Share the Sun. Some 500 mourners contributed more than $30,000. The PayPal app on Bill’s phone pinged for days.

That summer, Let’s Share the Sun dedicated its annual trip to Sheila and returned to Carver to share their sad news and deliver lanterns. The village prepared a big meal to celebrate Sheila’s life. The local priest hung her picture in the school and dedicated it with what Tim describes as a “very physical prayer,” slamming the wall with his hand.

All of that part was planned.

Then, in “this kind of spontaneous, wonderful moment,” Tim says, the priest, the teachers, the schoolchildren, their parents, all began to sing. The words were Creole, but the melody was unmistakable. It was “How Great Thou Art,” the same hymn they’d sung at Sheila’s request during her funeral in Boston.

“It was a complete coincidence,” Tim said, recounting the story in the Gailius’ kitchen in Milton last summer. “None of them even spoke English. None of us could tell them to sing this song.”

Eyes shining, Jean Nolan smiled as she leaned in to correct him. “It was not coincidence. It was grace.”

John Nagy is an associate editor of this magazine. “The Sun Farmers,” his feature story about Bill and Nancy Jordan and the Let’s Share the Sun Foundation, will appear in the magazine’s Winter 2015-16 issue.