Does foreign aid actually harm people in the developing world? Is market globalization a good thing? What does the Bible say about private property? These and other issues come to life in the PovertyCure DVD series, directed and hosted by Michael Matheson Miller ’92, who heads PovertyCure.

Based in Grand Rapids, Michigan, PovertyCure is a nonprofit coalition of more than 200 partner organizations, including Notre Dame’s Mendoza College of Business and the Gigot Center for Entrepreneurship, which promotes entrepreneurial solutions in the developing world. It is aimed, says Mark Weber ’09, associate producer of the DVD, “at challenging conventional thinking about poverty and promoting human flourishing.”

The six-episode DVD series weaves the personal stories of people in such places as Ghana, Kenya, Rwanda, Haiti, Bangladesh and Argentina — from the grocer who can’t expand his tiny store because he lacks property rights to the widow whose textile company has to compete with the free clothing shipped as aid — with discussions of property rights, rule of law and political and economic freedom. As the povertycure.org website says of the series, which is co-produced by Anielka Munkel ’09MBA: “Here we explore the economic, social, political, and spiritual foundations for sustainable development rooted in the creative capacity of the poor.”

The DVD, says Weber, “is primarily a conversation starter. . . . It’s supposed to shake things up.” An enclosed booklet provides questions and resources to spur additional reflection.

“In college, stuff like this was never taught to me,” says Weber. “It was a big revelation to me: how we literally hurt people with some of the ways we do charity and aid.”

Released in late 2012 and available at PovertyCure.org and amazon.com, the DVD doesn’t require a master’s degree in economics to understand. But for those who want to dig deeper into the PovertyCure initiatives, the organization offers an International Development 101 “class” in poverty issues at povertycure.org/issues/.

Calm, happy, anxious, cheerful — pick the adjective that best describes how most high school students feel about taking the SAT.

If only the standardized test were that easy. Although they can’t guarantee it will reduce students’ anxiety, Sonali Mathur Malik ’05, Urvashi Mathur ’10 and their mother, Suniti Mathur, have created an online test preparation company, TestRocker, that is designed to help students maximize their SAT and ACT scores.

“Our true inspiration was our mother,” says Urvashi. “She has been a private tutor for over 14 years and has tutored more than 1,200 students for the SAT and ACT.”

The sisters conducted market research to find out, says Urvashi, “exactly what students look for in an ideal prep method.” Using their mother’s tutoring methods as a base, they created the online SAT prep version, which they beta-tested for almost a year and officially launched in December 2012. Another ND alum, Michael Henry ’10, came on board as manager of business development in January.

“We really made it very targeted,” says Urvashi. “We created a diagnostic test . . . from there it creates a customized study plan for [the students].” Practice questions and video explanations are also available, and TestRocker clients can even receive hand-graded comments on two essays.

Sales of the SAT program, which costs $699 for six months of access, have zoomed by almost 43 percent each month, says Urvashi. The customer base is split evenly between clients within and outside the United States. An ACT version was to be released in September.

As their father, Atul Mathur, cheers and coaches from the sidelines, the sisters are reveling in the excitement of creating a family business. Both work from company headquarters in New York, Urvashi as chief operating officer and Sonali as chief executive and chief financial officer.

He graduated from Notre Dame and Fordham Law, both with honors. He’s a young, fierce assistant U.S. attorney for the southern district of Florida. And, most recently, he added “contestant on ABC’s The Bachelorette” to his resume.

Michael Garofola ’02 didn’t exactly sign up for the long-running reality show. Friends nominated him, and it wasn’t until he was asked to attend a casting call that he was in on the ruse. Though he realized the chances of finding love, and lasting love at that, were slim, he felt adventurous.

“I’m a firm believer in leaving no stone unturned,” he says. “And if [a relationship] is important to you, and if nothing else has worked, why not try it?” 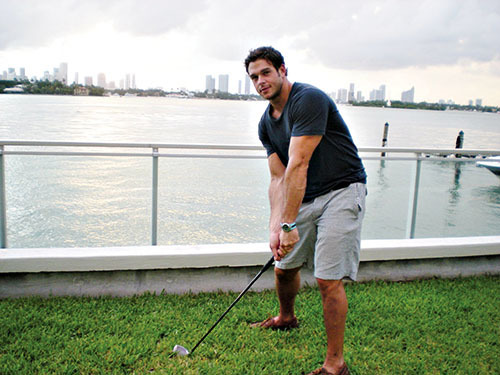 The show didn’t work for him either — he was eliminated by bachelorette Desiree Hartsock in week seven, with just four men left — and culminated in a teary phone call to his mother, to whom he hadn’t spoken in weeks. Which brings up interesting details about the show: While the men are taping the season, they have no access to phones or the Internet; they can’t wear anything with any sort of logo (which explains the vast assortment of solid V-neck tees); and any movie, television or corporation references will be cut because of copyright limitations.

Portrayed as the fiery prosecutor and moral policeman on the show’s ninth season, which aired from late May to early August, Garofola was seen confronting the other contestants on their questionable behavior. Despite the drama viewers witnessed, he says his time usually was spent cracking jokes and developing friendly relationships with the guys; most of that behavior was left on the cutting room floor.

“I don’t have any regrets, but I think I got wrapped up in things there,” he says. “You’re not in contact with your family and friends for a while, and you can kind of lose sight of the big picture. There were times when I was probably more fired up than I should have been.”

Despite the outcome, he is quick to note that the show did provide some exciting opportunities, such as traveling to Munich and Portugal, taping a music video with Soulja Boy and competing in a dodgeball tournament. But for Garofola, a Type I diabetic, one of the best parts was being asked to be a celebrity chair for an event for the American Diabetes Association after the show was finished taping.

“I took a risk,” he says. “Look, if you want to find great love, you have to take a risk. It didn’t work out for me, but I don’t regret taking that risk.”

Dr. Larry Burchett ’01 also appeared on this season of The Bachelorette but was eliminated the first night.

Carol Schaal ’91M.A. and Tara Hunt ’12 contributed to these pages.