In what he calls “a unique form of recycling,” F. Conrad Engelhardt ’03Ph.D. gathers wine corks from restaurants around London and uses them to create portraits and pictures. The artist and his wife, Jennifer Robert Engelhardt ’02, moved to England in 2005; she to work as an attorney and he as a senior research chemist. Both jobs, he says in an email, had “no love or respect for reasonable work hours.” 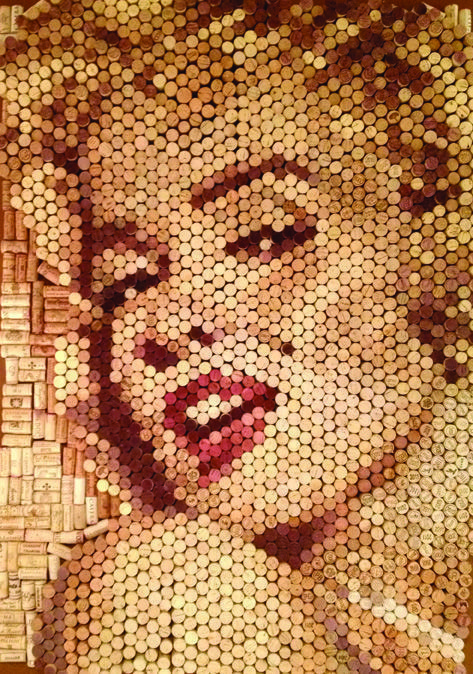 In 2011, Conrad took “a calculated risk on something new” and started a small investment fund. However, he says, “I missed making something real and tangible.” So that same year, he began making artwork with corks, seeing the result as “an extension of French Impressionism or Pointillism.” Since then the self-taught artist has created eight pieces, including the Marilyn Monroe artwork shown here.

Each piece is generally about 4 feet by 3 feet, he says, and contains from 2,000 to 2,500 corks. He begins by putting 3,000 industrial staples, which serve as attachment points for the corks, into an artist hardboard. Using black-and-white photos for reference, he then creates the image.

He uses the corks as they are, stained only by the wines they retained. While the most common hues are from the red and purple family, with brown, orange and rust colors also prevalent, he has also received corks that carry a tinge of green. “The only color I do not seem to have access to,” Engelhardt says, “is from the blue end of the spectrum.” Most pieces take him about a month to complete, and the finished work is placed in a box frame with a glass cover.

His first piece, a triptych of a reclining woman, hangs in Lutyens Restaurant, London. He sells others on his website, corkbycork.com.

CEO, CFO, executive director, founder — the titles that flash by under the names of those featured in the documentary Band of Sisters tell the viewer plenty about how the world has changed for the women who once wore wimples and lived in convents.

“The film celebrates what women religious have done,” says its producer-director, Mary Fishman ’82. “It’s not like a syrupy tribute or anything. It shows them like they are.”

The 88-minute movie focuses on Catholic sisters in the United States and their work for social justice in the aftermath of Vatican II. 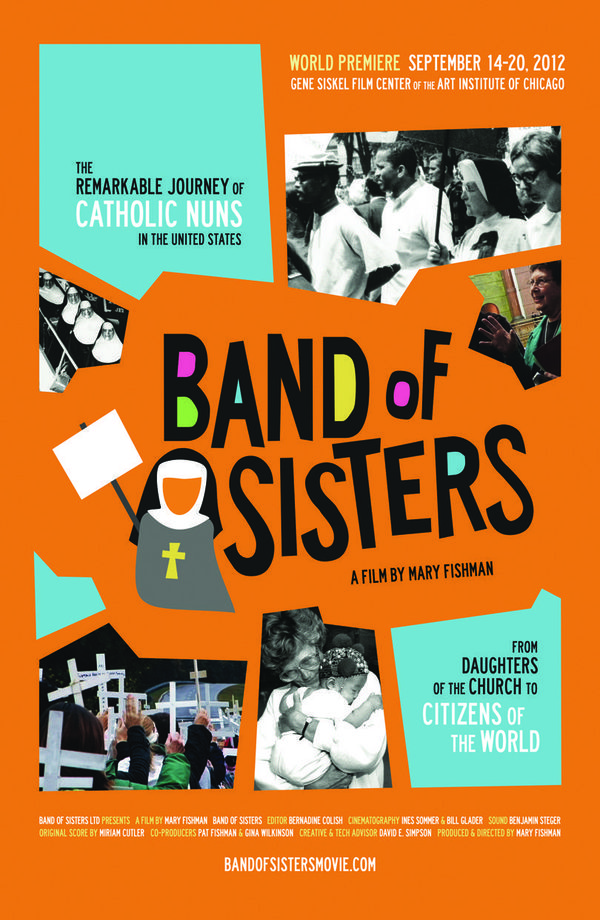 The film premiered last year at Chicago’s Gene Siskel Film Center. “It sold out every night for five nights,” says Fishman. “I was told that people came out in animated discussion. . . . Some said it was a spiritual experience for them, watching the film.”

Fishman spent five years filming the documentary, a switch from her jobs as an architect in California and a city planner in Chicago. “I basically was responding to this desire that I felt for a long time that I wanted to make movies since I was in high school,” she says. “I wanted to do something that was fun, that was creative, where I felt like I was making an impact on the world in a good way.”

Which is what the various sisters she follows in the film say they hope to do, as they work on systems change and political advocacy, whether their focus is the environment, immigration reform, the homeless or world peace.

A DVD of the film will be released this autumn, but Fishman says for now she is focused on setting up screenings across the country. To find out where screenings are taking place, or to request a screening at a parish or community center, visit bandofsistersmovie.com/.

A three-volley salute. “Taps.” The folding of the flag.

For Russell L. Hooker Sr., a decorated Marine and Korean War veteran, military honors were in order for his April 2012 funeral. But this was no ordinary ceremony. Hooker’s last wishes were made possible thanks to a fellow veteran, Robert L. Miller Sr. ’42, ’47J.D., whose nonprofit organization and drill team, Miller’s Vets, offer homeless veterans in Indiana’s St. Joseph Valley area military funerals at no cost to their families. 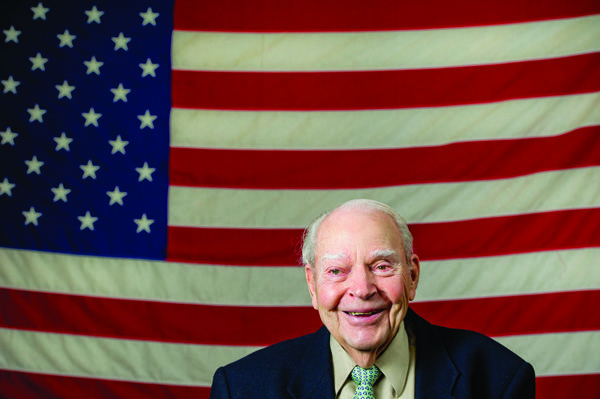 “The Last Salute” is one of the services provided by Miller’s Vets, which the World War II and Korean War veteran and retired judge founded in January 2009. In December 2008, his granddaughter, Amanda Miller, had mentioned that South Bend’s Center for the Homeless was looking for someone with a military background to work with veterans. So Robert Miller stepped up with the program that gives veterans a way to serve their community, thereby restoring their sense of self-worth.

With the help of the center’s executive director, Steve Camilleri ’94, ’01M.S., Miller got homeless veterans back in uniform and performing as part of a drill team that participates in a number of local events, including marching in Memorial Day parades, raising the colors at Labor Day ceremonies and more.

Miller also funded the Robert L. Miller Sr. Veteran’s Center, which opened at 747 S. Michigan Street in South Bend in November 2011. The center houses 24 male veterans at a time and provides them with clothes, meals, and access to addictions treatment and individual and group therapy, all designed to help them re-integrate into society.

“In general, there is no doubt that if you’re a down-and-out veteran, this is the place to be,” Miller says.

The center has been home to 60 vets since its inception, Miller says. Several are now employed, and a few have moved out into their own living accommodations as part of their full transition back into the community. The success of his organization has encouraged Miller, who turned 92 in December, to begin working with the Notre Dame Alumni Association on expanding the program statewide and eventually nationwide.

“It’s a big assignment, but the NDAA is almost tailor-made [for it] — God, country, Notre Dame — it just goes hand in glove with what we’re trying to do,” Miller says. Notre Dame club members, he adds, “just naturally take toward helping veterans.”

He’s already managed to influence an entire generation of men’s fashion, but the career of designer Thom Browne ’88 recently hit a new high with first lady Michelle Obama picking one of his designs for her inauguration outfit in January.

Browne is a former Notre Dame swimmer known for his tightly tailored suits, surreal fashion shows, and red, white and blue tagging. A recent entrant into women’s clothing, he was inspired by a necktie to make Obama’s checkered, navy coat and dress. The first lady, who had also worn a Browne dress at a presidential debate and honored him at the National Design Awards, chose the outfit from an array of commissioned options.

On Inauguration Day, Browne tweeted that it was “one of those rare and humbling moments in one’s life that will always be remembered.”

His designs were worn throughout the movie awards season, and he also merited a profile in The New York Times, but the inauguration outfit may prove his most lasting achievement, as it is placed in the National Archives.

Ian Williams ’11 and Darius Fleming ’12 didn’t manage to get rings with the San Francisco 49ers this year, but the recent Notre Dame football players did continue a long tradition of Fighting Irish alumni making it to the Super Bowl.

According to the University, out of the 47 Super Bowls, just five have not had a Fighting Irish player on a team’s roster, and 14 straight have had a Domer on at least one of the squads. The last Super Bowl without a former South Bend resident was played in 1999 between the Denver Broncos and Atlanta Falcons.

Here are the players who made the championship game since the beginning of the 21st century:

Four medical school students who did their undergraduate work at Notre Dame are among those supporting the Ride for World Health, a charity with the tagline: A journey across the nation to meet needs around the world.

Biking in the 3,400-mile ride this year are Chris Esber ’09 and Dan Djondo ’07, both students at The Ohio State University College of Medicine, and Matthew Morrin ’07, a student at Loyola University Stritch School of Medicine. Patrick Wald ’09, also of OSU’s medical school, worked on background logistics for the event whose stated purpose is to “educate, advocate and fundraise.”

A few weeks before the trip began, Esber said he and Morrin were planning to bike the entire route from San Diego, California, to Washington, D.C., while Djondo was intending to participate in the March 20 to May 12 ride for three weeks.

The two beneficiaries of this year’s ride are Village Health Works, which delivers community-driven medical care in Burundi, Africa, and Empower and Advance, a charity that trains Haitians to become emergency community healthcare workers.

Since 2006, the Columbus, Ohio-based Ride for World Health has raised more than $500,000 for its various beneficiaries, said Esber. But raising funds is only part of the charity’s mission. “The bike ride is more of a platform to talk about the real issues of global disparity,” he said. As the cyclists traverse the country, they stop in towns along the way and offer educational activities. The Coast-to-Coast Lecture series, the organization notes on its website, is designed to create “awareness of global and domestic health concerns.” Esber said he intends to present two or three lectures, with a focus on “how we can improve the Western diet.”

The medical student also was planning to post updates of his trip at the Ride for World Health Facebook page. For the ride and the lecture series schedule, as well as opportunities to bike with the team for a few miles or to donate, visit r4wh.org/.