John Tabis ’00 laughs when he talks about the band he and Juan Pablo Montufar ’00, ’07MBA were part of at Notre Dame. “We called it Sexual Chocolate,” Tabis says.

The new business partners did better when it came to a name for their November 2012 startup, an online floral delivery firm they christened The Bouqs Company. It is, as their website (thebouqs.com) says, “bouquets, simplified.” That means the company ships fresh flowers direct from eco-friendly Ecuadorian farms to anywhere in the United States for a flat fee of $40. If you’re the forgetful type, The Bouqs offers a reminder service, which takes the worry out of missing such gift occasions as birthdays and anniversaries. 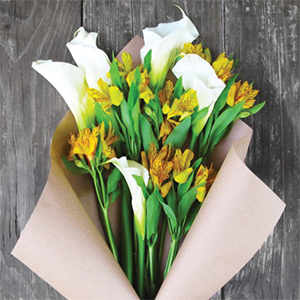 Tabis, who lives in Venice, California, and Montufar, who grew up in Quito, Ecuador, kept in touch after graduation. When Montufar left his finance job in Wisconsin to return to his hometown in 2011 and work on a flower farm, he and Tabis would sometimes move from social chat to a discussion of things like direct-to-farm supply chains. Tabis, who was working in ecommerce, once told Montufar that he often found buying flowers an unpleasant experience.

That offhand remark, says Montufar, sparked a brainstorming session about how to remove the disconnect from the joy flowers should bring to the frustration of ordering them. “It was really his project,” says Tabis of the idea behind Bouqs. Combining Montufar’s knowledge of agriculture and exporting with his own marketing background, Tabis says, the two developed a business model that lessens the time it takes to get fresh flowers to the United States and offers a competitive price, all while working with certified sustainable and socially responsible farms.

Tabis says he told Montufar he would quit his job and work full time on building the company. “I didn’t make any money for myself in a long time,” Tabis says. The new company, however, took off fairly quickly and now has seven full-time and three part-time employees.

Boosting sales was the great publicity Bouqs received — O, The Oprah Magazine included the floral company as one of “50 things that will make you say ‘Wow!’” in its August 2013 issue, while Maxim listed the service in its December 2012 “Lazy Man’s Gift Guide.” The magazine noted, “The Bouqs is the perfect gift to give if you like being lazy and looking like a thoughtful human being once in a while.” And flowers from Bouqs were highlighted on the Today Show and the online sites PopSugar Live! and Daily Candy.

“It is important to me to match the experience of producing the most beautiful flowers in the world with that of receiving them,” says Montufar. The beautiful flowers Bouqs works with include roses, phlox, hydrangeas, Gerber daisies, ranunculus, snapdragons and several varieties of lilies.

Digital files available on a computing device were christened “podcasts” a decade ago, but it was only last year that Brian Foy ’04 got hooked on them. “I started listening to comedy podcasts,” says the Chicago attorney.

He also started searching for Notre Dame football audio podcasts but couldn’t find any he liked. Foy decided this problem demanded a solution and he was the one who should fill the gap. But first he needed a journalist to conduct the interviews.

A fan of the Sports Illustrated and NBC Sports work of John Walters ’88, Foy reached out to him with the idea. Walters said he liked the concept, and the two began work on programs they named The Grotto: A Notre Dame Football Podcast. The name, says Foy, “represents a place where people can kind of gather and be united.” Their first podcast, which featured an interview with the Chicago Tribune’s Brian Hamilton, was released on September 26, 2013.

That episode garnered only 150 downloads; in a month the number of downloads rose tenfold to 1,500 and is still climbing. Guests on the show, which can be found on iTunes and at thegrotto.podbean.com, have included Bruce Feldman of CBS Sports; Charles Davis of FOX Sports; Arash Markazi of ESPNLA; and Mike Monaco, a Notre Dame junior and sports editor of The Observer.

“We try to create two 35-minute episodes a week,” says Foy. Walters conducts the interviews from New York City using Google Voice, and the recorded version is emailed to Foy. Foy edits and formats the interview and sends the completed podcast to the show’s host website and iTunes.

During the football off-season, Foy and Walters plan to conduct interviews with former football players and to cover football recruiting, spring practice and some winter sports, including basketball and hockey.

At age 16, Jillian Hirsch ’12 wanted to raise some money so her new friend, Pilar, could pay for a college entrance exam. The two had met when Jillian and her mother were volunteering at the Puericultorio Orphanage in Ayacucho, Peru.

“I was taking the ACT in the U.S. and had stayed in touch with Pilar via email,” says Hirsch, who can communicate in Spanish. “So I was thinking about how she couldn’t even take her exam. I really wanted to help her out.”

So Hirsch headed to her local Glenview, Illinois, library and checked out a book on starting a charity. That’s when good intentions met bureaucracy. “There’s so much paperwork,” she says.

Over the next several months, the high school junior formed a board of directors, created bylaws and sketched out a budget. The Daughters of Ayacucho Educational Fund (DAEF) officially became a charity in February 2007.

Seven years later, the fund has awarded university scholarships to 16 impoverished girls in the Ayacucho area. Higher education in Peru, Hirsch says, costs about $5,000 per student for five years, including room and board. Most of the scholarship recipients attend San Cristobal of Huamanga University.

Hirsch, an employee of Heidrick & Struggles in Chicago, is still in touch with her friend and travels to Peru every 18 months or so to meet with scholarship recipients and DAEF employee Maria Luisa, a retired social worker.

“I like being busy” says Hirsch, who continues to fundraise for the educational charity (brightgirls.org).

When a tile she was making for an Arts and Crafts fireplace broke, Kathy Reddy White ’84MFA was pleased. It fit right in with the idea of her specialty Ziggurat line, which she advertises as “Arts & Crafts tiles with a Wabi Sabi twist.”

In the Japanese culture, she explains, “Wabi Sabi celebrates the beauty of imperfection.” So the tile, broken in three, became part of the fireplace surround anyway and looks just like it belongs.

This is not to say that White deliberately breaks things or can’t be precise when necessary. In 1999, when she and her carpenter husband, Gary, bought and rehabbed a 1904 building across the St. Joseph River from downtown South Bend, they followed rules and regulations. With the help of “a few crazy friends,” their attention to detail paid off when the Charles McCormick Building was named to the National Register of Historic Places in 1999. 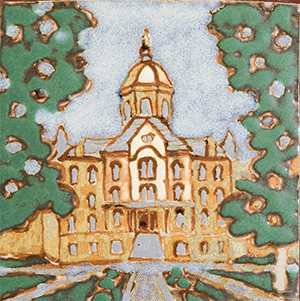 “It was insane,” she says of the rehab work, which resulted in two retail spaces and two upstairs apartments. White turned one of those retail spaces into Circa Arts Gallery, a showplace for local artists. Located at Colfax Avenue and Hill Street, in an area called the East Bank Village, Circa Arts offers items from 30 local artists who generally work in the Arts and Crafts style.

“I saw a gap, a need to represent local artists,” the 1979 Saint Mary’s College graduate says. The gallery also allows her to present her own work, from paintings and greeting cards to her Ziggurat line of gift and installation tiles.

The focus of the gallery changed a bit after White attended a business boot camp in Colorado in 2012. The training, she says, centered on “how to make your business a destination.” For White, that meant an upgraded ecommerce site, circaartsgallery.com, “so I can be here to serve the community and survive with a much bigger audience.”

Even though White says “I’m really passionate about this area,” she knows her gallery is difficult to find, although it’s only 1.2 miles from the entrance to Notre Dame. “You don’t naturally get the visitors,” she says of the many small shops in the East Bank Village — a food co-op, women’s specialty boutique, home and garden store, repurposed furniture shop and sustainable-living general store.
For now, White is trying to change her business/arts balance so she can spend more time on her tiles and other artistic pursuits.

“My goal is to relieve the day-to-day [business] stuff,” she says. “I’ve always spread myself out too thin. I need to be selfish.”
After spending almost 25 years working in graphic design for agencies, she does feel as though she’s where she belongs. She’d just like to have more visitors.