If a spoonful of sugar helps the medicine go down, could a 30-minute interactive cartoon ease the way to healthy living? Michael Rhattigan ’91, CEO of Adventure to Fitness, believes it can, and more than 20,000 U.S. schools have invested in the idea.

Adventure to Fitness offers a series of videos that take children on animated explorations around the globe, with informative lessons sprinkled throughout. “It’s a full story line with a plot. . . . It’s like they’re watching a cartoon,” says Rhattigan. But young viewers aren’t just watching. As the lead adventurer, Mr. Marc, calls out maneuvers (“Run everybody; it’s a bison stampede!”), the kids jump, dance and wiggle their way through the show.

“Health and nutrition are infused in the story,” says Rhattigan, and such supplemental materials as word searches, coloring pages and healthy recipes are part of the package. Recommended for children from kindergarten to fifth grade, the program was developed with the help of educators, medical personnel and parents, and meets core educational standards. It is also available for home use (adventuretofitness.com/).

Rhattigan joined the company, then based in Florida, in 2010, when friends asked him to check out their pilot program. His father had undergone triple bypass surgery, and Rhattigan says he was ready to answer a healthy-living wake-up call.

He also started learning about the effects of video games, smartphones and handheld computers on today’s children. “Kids on average spend up to seven-and-a-half hours daily on digital media,” he says. “Childhood obesity has more than doubled in the past 30 years.”

While experts have vetted the program, Rhattigan also asked a former classmate, Chicago cardiologist Dr. John Costello ’91, the father of five boys, to review the material. And, Rhattigan adds, “My four nieces and nephews have been guinea pigs since day one.”

His young relatives eagerly took to the program, Rhattigan says, but his brother-in-law was a bit chagrined because his kids started recommending more nutritious options when they were at a grocery store or restaurant. That healthy mindset is exactly what Rhattigan hoped to the program would develop and what he personally strives for.

Rhattigan eventually moved Adventure to Fitness’ headquarters to New York City, where he lives with his wife, a cardiologist, and 1-year-old son. “I’ve got a long way to go,” the 45-year-old says. “I better be healthy.”

The wildlife is migrating, and a herd of about 200 elk adds visual impact to the view of Grand Teton National Park that Kathryn Mapes Turner ’95 is enjoying from her home in Jackson Hole, Wyoming, on an early morning in May.

“Jackson Hole has a special energy about it,” Turner says. “The solitude coupled with the magnificent beauty . . . you can’t help but be in a sense of wonder.”

Through technical training, practice, attention to detail, close observation and long hours of hard work, Turner has shared that vision of wonder in her paintings. And what she has captured on canvas has spoken to viewers, who reward her with both critical esteem and the financial ability to survive as an artist. 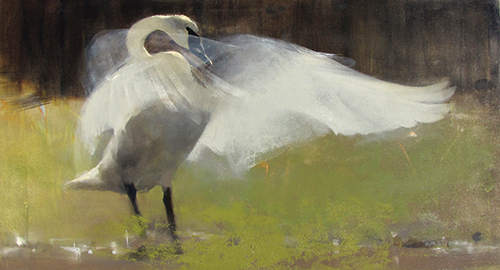 “Most of my exhibitions sell out — which is just extraordinary. I’m so grateful,” she says. “This is definitely a dream come true for me to be a full-time artist.”

An exhibition of 25 of her paintings is on display this month at Trio Fine Art, the studio in Jackson Hole that Turner owns and operates with two other artists. She named the exhibit “My Thin Place,” a term used by the Celts to represent the narrow boundary between heaven and earth. “This particular show is an expression of the direction my art has been moving in,” Turner says. While still a representational painter, her more recent paintings have become more ethereal; “almost,” she says, “taking a landscape to a dreamscape.”

The landscape she focuses on has been part of her life since birth; five generations of her family have lived in the Teton’s northwestern Wyoming valley. “This is where my heart is,” she says. “I feel so blessed to be able to do what I love and live where I love.”

This summer, the 42-year-old has an intern with her in the studio, a mentorship role that reminds Turner of the 10 years she spent teaching. “I love the experience with kids,” she says, “It’s so free and uninhibited.”

What is not free, at this stage of her career, is her art. “I couldn’t afford my own paintings,” she says with a laugh. However, she adds, “It’s weird to put a price on them. All my paintings are so personal; it’s really a part of who I am.”

With graduation looming, says Katie Zillmer ’12, “I started getting a little bit nostalgic about my time at Notre Dame.” So she grabbed her Panasonic Lumix and began to shoot photos on the ND campus.

No scenic panoramas, however. Instead, Zillmer searched for campus details that could represent specific letters — an outdoor basketball hoop, for instance, represented the letter “o” while the “Touchdown Jesus” mosaic served as a “y.” After gathering dozens of different shots, Zillmer would mat each 4-by-6-inch letter, combine them to spell out the name of a friend and frame the result. And some of her classmates received meaningful graduation gifts.

“This is a really awesome idea,” those friends told her.

That awesome idea eventually became a part-time business for Zillmer, whose online Notre Name store (notrename.net), offers the “custom creation of alphabet photography masterpieces using photos taken on and around the University of Notre Dame’s campus.”

One of her first sales was of a “Go Irish” piece purchased by the owner of the frame shop she uses in her hometown of Northbrook, Illinois. Parents of Notre Dame students are reliable customers, generally choosing matted and framed creations to give as gifts, but posters are the most popular offering. “They’re the most cost-effective option and include the place where they were shot,” Zillmer says.

Taking all of the alphabet photos required about 20 hours, she says, but “the thinking behind it took a lot longer than the actual execution.” Finding several varieties of a “z” proved the toughest task. “I tried really hard not to include actual letters,” Zillmer says, but she was finally forced to use some signage from Zahm Hall to add more options for that elusive final letter.

As she contemplates a move from her current residence in Columbus, Ohio, to South Carolina, Zillmer hopes to expand her alphabet photography line. “I want to focus more time and energy on this ND business and grow it to include more colleges,” she says.