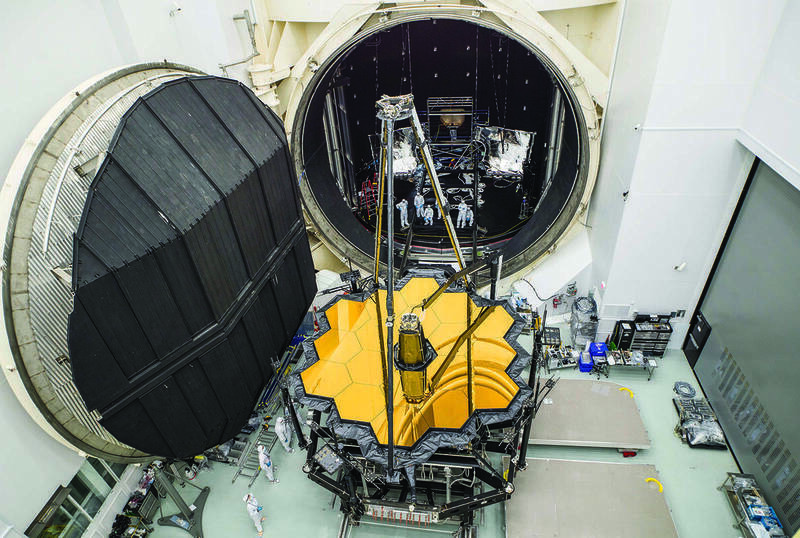 Tom Harkins ’08 has spent the past eight years working on a time machine. It’s just about ready to go.

After its planned launch in late fall, the James Webb Space Telescope will “take images of the early galaxies,” Harkins says, and “stare back at the Big Bang as far as it can.”

Those would be unprecedented sights, closer to the origin of the universe and the subsequent galaxy formations than human eyes have ever seen. The Webb’s ability to observe infrared wavelengths beyond the visible spectrum also will allow astronomers to peer inside dust clouds to see the birth of stars and planets. Harkins is among those developing the tools capable of seeing through space and time. He’s a spacecraft operations engineer with Northrop Grumman, the primary industry partner on the Webb project, a collaboration between NASA and the European and Canadian space agencies.

NASA calls the Webb the “scientific successor” to the Hubble Space Telescope, which has helped refine estimates about the age of the universe, track the development of galaxies and map dark matter — solving some mysteries of the universe and revealing new ones that it can’t answer. Launched in 1990, the Hubble still orbits about 340 miles above the Earth, roughly the distance from South Bend to Pittsburgh, close enough for space shuttle missions to install new instruments that keep the Hubble in the scientific vanguard.

The Webb’s cruising altitude will be nearly a million miles from Earth. “No one is coming out there to service it,” Harkins says, so he and his colleagues have taken innumerable contingencies into account. Harkins’ work has established steps in the deployment sequence for the telescope’s components, rectifying potential technical glitches. Working on radio frequency communication operations, he’s had responsibility for determining when to activate the instruments that will beam data back to Earth.

“The operations manual says, ‘Don’t put the truck in reverse when you’re going 50 miles an hour down the highway, right?” Harkins says. “Basically, the equivalent for a piece of electronics.”

Engineers also had to develop new technologies to make the Webb’s astronomical ambitions achievable. The observatory’s primary mirror has six times the collecting area of the Hubble’s. To get an instrument that big into deep space required an innovative design.

Made of ultralightweight beryllium, the mirror has 18 hexagonal panels that fold to fit into the European Space Agency rocket that will ferry it from French Guiana. En route to its orbit at what’s known as the second Lagrange point (L2), the mirror segments will unfold like a sunflower in bloom to its full size nearly 20 feet across. Once in use, the design features an adjustable agility to hone in on particular points in its field of vision.

“Some of the mechanisms that align our main mirror segments, they can actually change their radius of curvature,” Harkins says, “and they can tilt in different directions to change the focal point of an image.”

To maintain the sensitivity necessary to capture infrared images, the Webb has to operate at a temperature no greater than 45 degrees Celsius above absolute zero, around minus 370 degrees Fahrenheit. That threshold requires protection from the sun’s heat and light akin “to putting on sunscreen for SPF 1,000,000,” Harkins says. A shield the size of a tennis court will deflect the rays, maintaining the frigid conditions required for the telescope to gather its coveted data.

Astronomers around the world clamored to be among the first to conduct research based on the Webb’s “Cycle 1” observations, which are expected to begin about six months after its launch. From about 1,200 proposals, 266 were selected, representing 41 countries. For thousands of scientists, the new telescope is expected to be the observatory of the next decade.

For an engineer like Harkins, constructing the instruments that make it possible for researchers to decode the deepest secrets of the universe embodies everything that appealed to him about the field as a kid — turning a theoretical notion into a physical reality. Making complicated stuff that works.

“It’s an idea in a scientist’s head until we have a machine that can do it,” he says, “and it’s humbling, and I feel proud to be a part of the team that’s building that.”

He also feels the pressure of the approaching launch. In June, NASA pushed back from Halloween to an indefinite date in November or December, the latest in a series of delays on the project. Conceived 25 years ago, the Webb project has taken years longer and billions of dollars more than planned, prompting jokes, criticism and handwringing over whether it will live up to the hype. “Please don’t fail, please don’t fail,” reads a comment on a YouTube video animating the Webb’s deployment sequence.

Noting the issues, Scientific American countered in April that “many would argue that those delays and budget concerns are simply indicative of the telescope’s unprecedented scope and soaring ambitions.”

Just months from launch, Harkins focuses on practicing the procedures that he will follow during each step of the Webb’s million-mile journey to L2. At this stage, it’s about rehearsal, repetition, redundancies built into the machine and into the human responsibilities for making it go.

In addition to mastering his aspect of the project, he lets his mind wander now and then to consider the unforeseeable. During the Webb’s launch and deployment, he wants to encounter nothing of the sort, but a space observatory of unprecedented capabilities inspires occasional daydreaming beyond the mechanical minutiae.

“I like to imagine what it’s going to discover,” Harkins says. “I mean, there’s basically a 100 percent chance that there’s going to be scientific breakthroughs that change our understanding of the universe and our place in it. That’s why we build telescopes, because they refocus what we think we know about the stars and our place in the universe.”

Jason Kelly is an associate editor of this magazine. Read about Amanda Arvai ’04, another engineer on the Webb project.