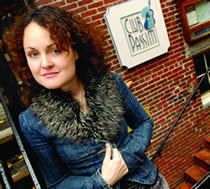 Most musicians want to share their music but aren’t sure if they can make a living at it. For Anne Heaton ’94, it was curiously the opposite. “I just didn’t know if I could take giving that much of myself to others,” she says. “To be that vulnerable night after night, it takes a lot out of you. Some deal with it by never opening up the whole way, but I usually don’t know how to do that.”

Taking the daunting emotional risk, however, has paid off for the soft-voiced, melodic singer. She has opened for Grammy-nominated superstar Jewel, headlined at intimate clubs throughout the country and created events where music is just one part of the journey. Her own journey began as a precocious 3-year old begging for piano lessons in Wilmette, Illinois.

“My mother was blown away that I would even think to ask for that so young,” she says. “It opened up a new world for me.” It also provided room to express herself, something which can be lost in the shuffle of being the oldest of four, not to mention the only girl. “We had everything you could ever want, except emotions weren’t exactly high on the list,” she says. “I needed something to get out all those things you build up inside.”

Peter Gabriel would also earn an assist with his album Us, which propelled a then-20-year-old Heaton to concentrate on music that mixed spirituality and psychology. “I learned later that it was reflecting on his divorce,” she says. “At the time I was just in tune with the African drumming and the depth of his voice. The album’s success almost seemed to be secondary. He was being true to what he was feeling, and it definitely rubbed off.”

Heaton, 36, still never considered her talent to be a future career at that point. Despite singing in rock bands, she was covering other people’s music and simply indulging a hobby. Even post-college, she found herself following her boyfriend to New York City instead of following her muse. “I was working as a temp,” she reveals, almost repentantly, “but there’s a lot of things to take advantage of in the city.”

One, she ultimately learned, was open mic night, as common as a late-night corner deli in ever-accessible Manhattan. “I didn’t think anything would come of it,” she says, “other than having some fun.” But something did come — fans and club promoters, who clearly saw Heaton laying down not just tracks but small authentic glimpses of her strongest self.

It led to a tour with legendary modern jazz drummer Max Roach, who worked with such greats as Charlie Parker and Duke Ellington, traveling through Europe on a freeing eight-day jaunt. “Here’s this legend who’s 70-something and so incredibly calm, understanding that that’s the atmosphere to bring out the best in your musicians,” she says. “We were doing early spiritual works, gospel tunes and music from Native American religion. That was a time I’ll never forget.”

Heaton finally recorded her first album, Black Notebook, in 2001, containing the song she’s most recognized for, “Megan & Kevin,” a touching wedding toast to a longtime friend. It starts off with two high school girls coasting in their car, one subtly gazing at the boy she likes. Rather than approach or call him, she agrees with her friend to try a mature alternative: stalking.

The refrain, “I’m not sure if he likes me,” summing up the insecurities and hope of those years, eventually gives way to the hopeful final line of one girl sweetly proclaiming on the other’s wedding day, “I’m very sure he likes you.”

“I think it’s popular because it’s something we can all relate to,” Heaton says. “Young love that hopefully will turn into something deeper . . . all the things women dream about on their way to a relationship.”

When Heaton’s next big break happened in 2002, winning a national contest to tour with Jewel, you would have thought she’d be awestruck at her luck. But Heaton admits she actually expected to win. “I don’t know why I thought it would happen,” she says with a laugh, “but I had no doubt. My fans were voting for me. Jewel’s fans were voting for me. I think I was the right kind of artist for that situation.”

The 10-city tour would introduce Heaton to what she did want and clearly what she didn’t. “Jewel has a great life, there’s no doubt about that,” Heaton says. “But I also felt it was just ‘play the songs and then call it a night.’ I really like to be involved with my audience and get as deep a connection as possible. I never played in front of that many thousands before, but I wouldn’t say it was 100 percent my kind of audience.”

Lessons learned, Heaton began work on her second album, Give In. She made it much more poppy and energetic, not for a run at album sales but to avoid feeling run down. “I put so much of my personal feelings in the first record, and I couldn’t do it that way again,” she says. “I needed it to be more relaxed and not feel like it was this open wound I was putting out there.”

By this time, Heaton was headlining top clubs such as the Living Room in New York City and Club Passim in Boston.

Matt Smith, manager of the latter, was taken aback by the command she was starting to cast from the stage. “You want to talk about an audience feeling they were involved,” Smith says. “She’d acknowledge whatever was going on and even stop a set. People could ask questions. She’d have an open dialogue. She wanted you to know that she was listening to you just as much as you were listening to her.”

And as Heaton listened to her heart, she knew to give that inner reflection one more, albeit painful, shot. The songs slowly unspooled, and her third album Blazing Red is being released this month. “My relationship of 16 years ended, and it was just so tough for me,” she says. “I couldn’t ignore the effect that would and should have on this album.”

Almost like a divorce record in the arena of So, Heaton’s feelings blast from the moment you click on her website via the infectious track, “My Only Way Out Is In.” “It’s about the idea that sometimes the challenges you face are huge,” she says. “You don’t know where to go and maybe the way to go is inside yourself to navigate it.”

While some of the lyrics offer this hopeful strategy, they also reveal Heaton’s darkest fears with lines such as, “No one loves me enough to put up with all this stuff,” or “I’m going to end up alone like I am most days at home.”

Heaton’s breakup forced her to realize that the life of a musician might not be as open as their work. “You can’t be on the road all the time and expect to have a strong relationship,” says Heaton, who’s done more than 800 shows in her career. “Musicians tend to have intimacy issues. Yes, you’re going and performing for people every night so you have a connection and bond with them, but then tomorrow you don’t have to see them anymore. You don’t have to go through the ups and downs or involve the fear of being abandoned. It wasn’t so much fun to write about that, but it was necessary.”

Not to say she hasn’t had any fun at all. In fact, she’s been entrenched in turning her concerts from just music to all-out events. “I put on a wellness festival this summer with massages for the audience,” she says. “My goal was for people to come away relaxed, and if my music wasn’t going to do it by itself then a good back rub might.”

She’s also extended her good will beyond the stage, traveling to Colombia to work with the charitable organization Niños de los Andes to teach a better way of life for a struggling country’s youth. “I want to tell their stories in songs,” she says. “I learned how these children are living in sewers and selling their bodies. I wanted to listen to their experiences and be changed by it.”

You don’t have to be in dire straits to find yourself on a Heaton song. You might just need a fiancée. “A fan actually wanted to hire me to write a song for the woman he was marrying,” she says. “At first I thought I couldn’t do it because I usually just write what comes to me, but then I thought, ‘He loves this woman. Why can’t I hear what he’s feeling and be that voice for him?’ It was a lot of fun, so I’ve done four or five more of those for people. It felt good to make them happy.”

Her place in music

Heaton also finally moved from New York, deciding that it was time to live somewhere just for her. And she couldn’t think of a better place than Somerville, Massachusetts, near Q Division Studios where so many of her songs have been recorded. “Somerville is more my pace,” she says. “I feel there’s so many musicians here connected to each other. They’re not just about the music business but about making music.”

It also allows her to play more often at Club Passim, the very place Joan Baez and Joni Mitchell started out so long ago and where Heaton feels alive to experiment, whether alone or with as much as an eight-piece gathering, which she prefers if financially feasible. When she strolls into the 125-person basement venue, the large picture windows giving only hints of pedestrians sauntering above on Palmer Street, she knows a captive loyal group is likely ready to give Heaton the deep experience she’s been longing for.

Nonetheless, as she appears to have found a home she can be comfortable with, mega-fame may not yet be beyond her. The big time, though not necessarily requested, does peek its head in from time to time just to see how Heaton’s feeling.

“A friend and I went back to her house and randomly shot a video for my song ‘Where Your Scar Is,’” she says. “We put it up on YouTube. It was selected for their home page, and a half-million people ended up seeing it. . . . It’s amazing when you put yourself out there what can happen.”

Eric Butterman did a profile for this magazine on Victory at Sea director M. Clay Adams ’32, who recently died, and will always remember the generosity of Adams’ time and the brilliance of his life.