It started with a broken heart. The broken heart led to wallowing in sad country songs. The sad country songs led Zach DuBois ’11 to write one of his own. And his sad song eventually led to music videos, a record label, opening gigs for country music stars, time on Country Music Television (CMT) and a top hit. A classic case of if you give a mouse a cookie.

If you give a musician a melody.

That all may make it sound like success came easy. But it’s fitting that DuBois’ first song to hit the mainstream was “Work Harder,” because working hard is what made the 27-year-old writer and musician a self-sustaining artist in Nashville, the capital of country music. 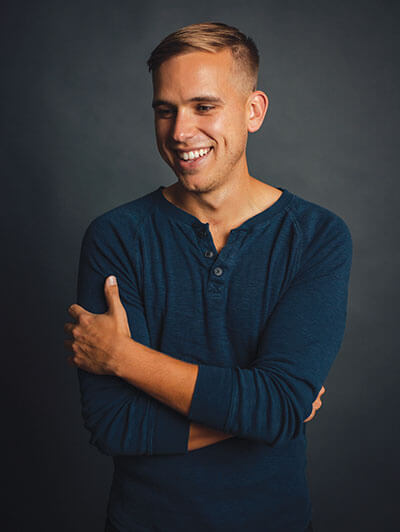 Based on a mock business plan he created as part of an entrepreneurship class at Notre Dame, DuBois launched his own record label, Backstory Records, shortly after graduation. While that sounds glamorous, it means DuBois is not only the talent of this agency, but he handles the marketing, the social media, the album sales, the event booking, the writing and the networking. And that’s when he’s not on the road touring as a solo artist or as an opener for Old Dominion, Jack Ingram, Randy Houser, Dan + Shay or the Josh Abbott Band. If he’s tired after a weekend of shows, too bad. There are small gigs to play, shows to attend and business connections to make.

“That’s how I’ve gotten a leg up on a lot of my peers,” DuBois says. “You have to be really driven to do those things, too, which are not necessarily the most fun. It’s a business at the end of the day. You get into it for the art side of it. But if you want to keep doing that art, getting paid to do that art, you have to walk the line and do the business of it.”

DuBois’s hustle and business savvy is what caught the eye of Leslie Fram, senior vice president of Music Strategy at CMT. She says major labels are more likely to sign on when they see an artist is booking shows, creating a fan base, making new music, and doing the leg work to prove they want to succeed in a competitive industry.

“I felt that he was one of those artists who was truly out there making it happen on his own,” Fram says. “The thing that I am very impressed by Zach and a lot of other artists is they’re humble and they realize they have a long way to go, but they’re willing to put in their quote-unquote 10,000 hours and they enjoy every opportunity and they’re so respectful of the songwriting community.”

Those hours are paying off. In March, DuBois was a CMT’s Artist Discovery pick, a kind of up-and-comer alert that boosts exposure for independent musicians. A few weeks later, his “Work Harder” video hit the 12-Pack Countdown on the CMT Music channel, among the likes of Tim McGraw, Blake Shelton, Chris Young and Kelsea Ballerini. That meant music lovers were voting to see more of his video, hear more of his music.

“I think what stuck out to people is that it was different. It was a video that hit on themes that are very true to country music but maybe aren’t always touched upon as much in mainstream country music,” he says.

“We wanted to write a song that wasn’t a beer-drinking song, or another relationship song,” adds Dubois, who co-wrote the piece with Devin Dawson. Frustrated with the portrayal of their generation as lazy, the duo decided to highlight the people who bust their tails day in and day out. They settled on the refrain, “When you want to pack it in, you gotta suck it up, dig deeper, burn hotter, work harder.”

For the music video, northern Indiana native DuBois could think of no folks with a better work ethic than farmers. So he and a small crew filmed at family farms in Goshen and Middlebury, and featured four generations of farmers. While the video showcases tractors and hay bales and cattle, the catchy anthem and message of earning your success expands far beyond the agriculture industry.

“Work Harder” is DuBois’ most commercially successful song, but it’s also the most true to the path he’d like his music to take. “As a songwriter you get the opportunity to write to try to spread a message,” he says. He was raised in a John Denver household and picked up on how a musician could use his art to advance his chosen beliefs. And if given the choice, he says he’d prefer to craft songs for stars, rather than becoming one himself.

That’s not to say he doesn’t sing an occasional beer-drinking, girl-chasing track. There’s no better Irish tailgating song than his “Beer for breakfast.” With lyrics like “Friday nights at Finny’s and six-pack Saturdays. Getting rowdy at a tailgate before the football game,” it’s an immediate swig of Notre Dame nostalgia. So was DuBois’ first live performance, “Hip Hop Night at Legends,” a typically crude Keenan Revue production. But his new songs have a depth that doesn’t often hit the charts. A recent work-in-progress tells the story of migrant workers.

“The fans love that — when an artist definitely has something to say and the songs are meaningful,” Fram says. “That’s always going to be the heart and soul of country music.”

“He’s building a great repertoire of songs,” she adds. “I believe his next step will be to get a publishing deal, which I think will be very easy for Zach with his songwriting.”

But after Fram’s assessment that he is on the cusp of songwriting success, DuBois changed keys. He couldn’t shake a longtime dream of becoming a doctor, so instead of the route to record deals or songwriting contracts he’s mapping MCAT dates and taking classes. And he’s left Nashville in the rearview mirror.

“It’s the most success I’ve ever had as an artist,” he says of his blip on the charts. But when he considered what part he wanted music to play in his life, he realized he didn’t want it to be front and center. And life on the road might jeopardize family life. “The more successful you are as an artist, the more and more you have to be gone.”

That’s not to say he’s giving music the boot. Although he hopes to start medical school in 2018, he’ll first hustle to book another tour and is working on a fan-funded album, all of which will help pay for the college credits and MCAT exam. Some of the proceeds will benefit South Bend’s Logan Center, which supports those with intellectual and developmental disabilities.

His planned career shift has surprisingly reinvigorated his music. “It takes the pressure off trying to make a really commercially available record.” Instead of writing songs to impress record labels, DuBois is free to feature the storytelling, messaging and folksy tunes he admires. And if you’ve seen him live, that’s going to change a bit, too. Instead of big crowds and college bars, he’s hoping his next tour features smaller audiences in more intimate settings.

To paraphrase John Denver, DuBois is still finding his own way. That road may lead away from a record deal or a spotlight moment at the Opry where he looks out and sees that the grind has paid off. Instead, the hard work is just beginning and the destination is yet uncharted.

Tara Hunt McMullen, a former associate editor of this magazine, is a freelance writer in North Carolina.