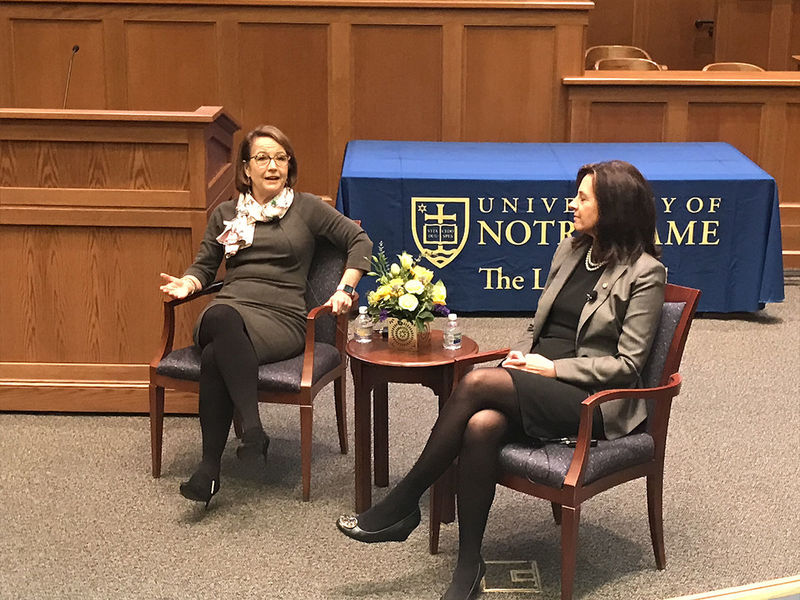 A century after American women gained the right to vote, women attorneys and judges have vivid memories of professional situations where they’ve found themselves the only woman in the room — and sometimes have been condescended to because of it.

Loretta Rush, chief justice of the Indiana Supreme Court and the first woman appointed to the state’s high court, said she’s been at social and professional gatherings where she’s been asked: “And whose wife are you?”

Rush made her comments during a January 24 event, “How Women Have Shaped the Judiciary,” a part of Notre Dame Law School’s commemoration of the centennial of the 19th Amendment, which granted American women the right to vote. A panel of women in the legal profession recalled numerous such experiences while clerking, practicing law and serving on the bench.

“To give credit where credit is due, with the men that I worked with, I never felt undervalued. . . . I never felt belittled or undervalued because I was a woman,” said Judge Amy Coney Barrett ’97J.D., a member of the U.S. Court of Appeals for the Seventh Circuit and a Notre Dame law professor, who is considered a potential future nominee to the U.S. Supreme Court.

Judge Elizabeth Tavitas ’85, ’90J.D., of the Indiana Court of Appeals, said women have a tendency to wait until someone taps them on the shoulder, but they can advocate for themselves. She encouraged women attorneys to pursue their career goals with determination.

Judge Elizabeth Hurley ’95J.D. of Superior Court of St. Joseph County moderated the panel. Hurley recalled attending Rush’s first State of the Judiciary speech after she became chief justice in 2014, and seeing the first several rows of the courtroom filled with women judges. “It was one of the greatest moments,” she said.

Five years ago, about 18 percent of judges in Indiana were women. That figure is now about 30 percent, Rush said, progress that must continue until the judicial bench reflects the diversity of the society it serves. “We have to keep pushing,” the chief justice said.

At Notre Dame Law School, 51 percent of current J.D. students are men and 49 percent are women.

Rush said she mentors young women lawyers and law students by inviting them to her home and to professional events, encouraging them not to limit their professional futures. She encouraged women attorneys to apply for openings as judges.

It’s important for women attorneys and judges to have female colleagues in the profession, Barrett said. “The presence of other people who have the same demands on their time make it more comfortable and easier,” she said.

Tavitas has a strong interest in justice for families and children, volunteering personal time for that cause. “Projects I’ve worked on for years and years are now coming to fruition,” she said, “because there’s more women in the field working on these issues.”

Barrett said access to good and affordable child care is a top issue for women attorneys seeking to progress in their careers, particularly lawyers who are working in public-sector jobs. She and her husband, Jesse Barrett ’96, ’99J.D., have seven children.

Tavitas recalled shifting to part-time work for several years while her three children were young so she would have time to volunteer at their school. She said a male colleague told her she would regret it, but she never did.

Diversity remains lacking in the legal field.  There are about 18,700 attorneys in Indiana and only about 1,400 are people of color, Rush said. “To have a fair system, we have to make sure our judiciary profession mirrors our population,” she said. “We have a lot of work to do.”

For today’s lawyers and judges, a crucial task is encouraging young women attorneys and attorneys of color in their careers, Barrett said. “Our role is to encourage you,” she told the mostly female audience, “and your role is to pick up the torch and encourage each other.”