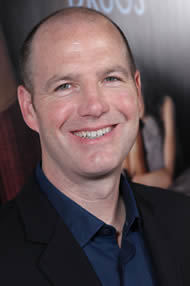 “Who are you wearing?”

I blinked at my female friend. She’s hammered, I thought. She didn’t mean “who,” she meant “what.” Panicked that I’d committed a fashion faux pas, I glanced down at the clothes I’d worn to the party in early October 2010. But nothing was amiss, which is to say I looked like I always did: as though a tornado had struck the men’s sections of only two stores in the mall and then deposited their contents into my closet.

She read my confusion, which had furrowed my brow like a shar-pei’s. “To the movie premiere! Who are you wearing?” Her face lit up like mine does when talking about Rocket’s kickoff return against Miami in 1990.

Ahhhh. Love and Other Drugs, the movie based on my first book, Hard Sell: The Evolution of a Viagra Salesman, was scheduled to open the American Film Institute’s annual festival on November 4. In addition to co-stars Jake Gyllenhaal — playing “Jamie,” words that are really, really fun to type — and Anne Hathaway, numerous celebrities would be in attendance. Ditto, the paparazzi. As the author, I’d get to walk down the red carpet, where I’d be photographed and interviewed. You know, ho-hum everyday stuff.

Later, when I related the details of my party conversation to Jenn, my then-girlfriend, her face expressed some disappointment at having somehow fallen in love with a rube.

The premiere’s dress code was cocktail attire: dark suit without a tie. Convenient, since I already owned a black suit. “Snazzy,” my father would describe it; three-buttons with an athletic cut. I happily shared that fact with Jenn, who did not share my enthusiasm.

I scoffed. She did not. “Jamie, it’s your movie premiere!” Her tone softened to that of a kindergarten teacher. “You need a new suit for this.”

My face flushed with embarrassment. I felt an awful lot like Dad, which is never a good thing when discussing fashion. He would still be sporting plaid pants if Mom hadn’t swiped them from his closet and donated them to Goodwill in 1985.

Why would I ever have thought my old suit would cut it?

“Besides,” Jenn added helpfully, “Three-button suits are out; two-buttons are in.” Of course they are. Having once owned a clothing label, she wielded a wealth of fashion-trend wisdom, knowledge that would have proved invaluable to a novice like me in a situation like this. Naturally, I did not invite her on my shopping excursion.

In December 2009, she had wanted to buy me clothes for Christmas. At Neiman Marcus she expertly yanked many “hip and stylish” shirts off the rack, each of which I passed back with a grimace, like a 5-year-old given broccoli. The tres chic salesman rubbed her back empathetically. When we finally settled on some less daring tops, I couldn’t help coughing at their price tags. Not a lot of fa-la-la in the car on the way home.

Setting out solo to buy the most important suit of my life was the sartorial equivalent of a couch potato attempting Mount Everest sans Sherpa. I went to Macy’s. You don’t read about many celebrities doing their clothes shopping there.

Instantly, I spotted a black, two-button suit with faint pin stripes. On sale for $250! No need for an overly detailed girlfriend or fawning salesman; a 40-year-old Notre Dame grad and former Army officer can dress himself, thank you very much! (Note: Without authorization, Jenn stopped into a Beverly Hills men’s boutique at which she identified a London-designed, Italian-made, midnight blue shirt for me. As instructed, I drove 45 minutes to the store where I forked over the — cough — $200.)

The movie premiered at the famed Grauman’s Chinese Theatre. I had booked a hotel room across the street at The Roosevelt — no parietals in Hollywood! — the swank spot hosting the after-party. Jenn got her hair and makeup professionally done, and looked stunning in a silky black dress. In my new suit and — gotta grudgingly admit — spectacular new shirt, I strode toward the red carpet like I actually belonged there.

Then I felt the tightness in the lower back of my suit jacket. I tried to poof it, like a concert pianist prior to sitting down on his bench. But my jacket did not budge. This would have been fine if it had no vents. But it did. Standing on Hollywood Boulevard, merely two first downs from the media lights and red carpet, Jenn confirmed that two strings crisscrossed the bottom of the jacket flaps: an X marking the spot of my fashion fiasco.

She didn’t need to say the words: That wouldn’t have happened at Neiman Marcus

Sweat spewed from every pore in my body, just like when I got my first speeding ticket at age 17 in my father’s Buick. Limousines pulled up, dispensing Tinsel Town stars. Camera flashes created temporary daylight.

I desperately pointed to Jenn’s fashionable, tiny clutch. “Do you have scissors?”

“Who brings scissors to a movie premiere?!”

Questioning how she could ever be a decent mother if she wasn’t prepared at all times, I searched frantically for a couture crisis cure. A guy squeezed past me so he could enter The Coffee Bean behind us.

Jenn remained on the sidewalk, undoubtedly questioning my ability to be a father if I couldn’t even successfully complete a suit purchase.

The bustling coffee shop froze after I exploded through the door. I cut to the front of the line without objection, an amazing occurrence. The streets of Hollywood teem with the mentally ill. Apparently these customers simply thought me truly deranged.

The teenaged barista stared at me, fearful. I beseeched him. “Dude . . . do you have scissors I can borrow?” I half turned, half bent over to awkwardly show him my tethered vents.

Without a word he whipped out the requested tool, spinning it like a gunfighter before handing it to me. Snip. An aircraft carrier of weight sank from my shoulders.

Two minutes later, Jenn and I stood on — no — floated above the red carpet, beaming for a phalanx of photographers screaming my name. “Jamie! Jamie!” It was the high point of my life.

Later we would learn that Jamie Lee Curtis’ limo had pulled up immediately after we stepped on the carpet; the paparazzi were yelling for her.

For my next movie premiere — fingers crossed, wood knocked — I don’t know who I’ll be wearing. But I’ll be bringing a female shopper to help me decide. And I’ll be going to Neiman Marcus. That’s a tax write-off, right?

Jamie Reidy is an author and screenwriter in Manhattan Beach, California, where he neither hangs ten nor gets tan.