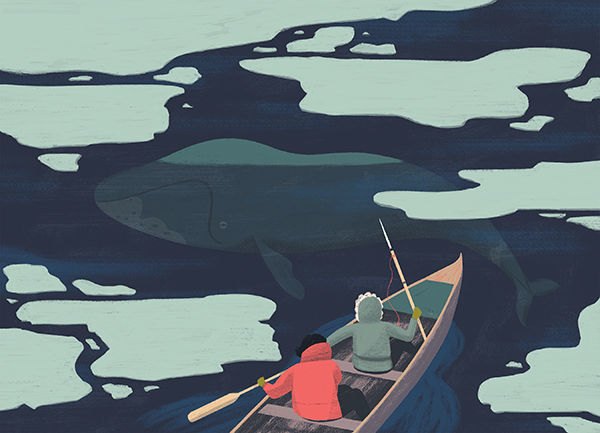 The cable snapped, whipped and flashed through the night sky with decapitating force. “Everyone okay?" the mayor shouted. Only silence. Even the air lingered as if sharing in our suspense. “We’re okay!” someone behind me blurted. Having scrambled to retrieve the snapped cable, a few men seized a new rope. They waded into the blood-soaked surf and in a minute they knotted the rope around the flukes of the whale.

Only two days earlier I had landed on St. Lawrence Island behind schedule from Nome, my plane wind-battered above the Bering Sea and nearly blown into Russia. A winter storm in a Siberian Yupik village had opened an opportunity for me to exercise my new knowledge in disaster relief. I could assess the damage caused by the storm and finally step into the professional experience I sought when I first came to Alaska in 2016.

The village was called Savoonga. When I arrived, I discovered homes uprooted from their foundations and roofing peeled off into splattered debris. Home by home, I scribbled notes for my assessment: “Single-family dwelling destroyed. Entire wall torn off.” Or, “No heat; roof collapsed.” It was only 5 p.m. when a boy I had interviewed and who had gone to play basketball rushed back. “Did you hear about the whale? They found it 30 miles off the coast! They’re coming to the shore!” He darted away before I could ask a question. The buzz of snowmobiles erupted and soon a concert of barking dogs followed. The village began to gather by the shore and once I made sure I was sufficiently bundled for the Arctic weather, I made my way to join them.

Sea ice, once plentiful, barely speckled the horizon. The remoteness of the island soothed me. Hues of twilight painted the wooden frames of Alaska Native sealskin boats — umiaks — in stretches of cerulean, violet and pink frost. Soon the sun set and men posted lanterns along the beach. Often the air dragged its breath as the wait for the whale lulled on, and at other times a camaraderie of storytelling awakened. Toddlers nestled into the laps of teenage siblings until scurrying away into nocturnal snowball fights. By 3 a.m., my legs trembled to my toes and the wind whipped my face.

I turned around to find a little woman right behind me. The hood of her coat swaddled a mask of scarves through which a pair of glasses poked out.

“I’m Ameralda.” She said her husband was one who got the whale. “Got to take care of our own. My dad landed whales too. How else to eat and keep our culture? We are feeding the whole village.” I remembered aisles of the village store barren save for packets of bubble gum and $9 bags of Doritos. My stomach shuddered. Ameralda huddled closer to me and said, “The secret to cooking good whale is Shake ’N Bake,” and behind her glasses I caught a wink.

The glimmer of a light shone on the sea’s horizon. “Is it the boats?” I asked. Ameralda nodded. Another glimpse of light and then a few more and kids close to the shore began pointing to what seemed like the only light in the world. Two miles away? Now one mile. One thousand feet. Four hundred feet. A colossal silhouette approached, buoyed by a party of six skiffs. “An adult bowhead,” Ameralda said.

In the lamplight the black sea changed to a stale red as the body brushed against the shore. The whale stretched 50 feet from its tail to its head, which was crowned by splintered baleen. I considered the knowledge it took Ameralda’s husband to harness the key moment — the moment when he saw the whale surface for a breath, most likely its last, the moment when the harpoon collided with the bowhead’s skin and pierced into the blubber, the moment the explosive core sank into its gargantuan blue-black weight until detonating below the jagged waves of the sea. Now, by knot and hook the men tied rope and cable, and by muscle and truck-engine the whole village began its tug of war to bring the whale onto the beach.

From then on we had hours of pulling and heaving again and again until our bodies felt stiff and the cable-strapped trucks took over. By grace the snapped cable didn’t hurt anyone on the shore. Some of the hunters murmured about pulling up the whale without sea ice. Without the ice, an hour of effort moved the whale by inches. Ameralda shook her head, too. “These storms will become more common now that the ice is gone.”

“We know. Our elders know. Our lives are intertwined with the ice and the sea. The seal, the whale, the walrus. No ice means different migrations for all of those animals and unpredictable weather. This wasn’t the first storm for our community now.”

It was clear to me that where the storm brought loss, the whale brought hope and a regaining of control. But it was also clear a window was closing. When the ice melts, a window for understanding the sea, of sealskin boats and favorite whale recipes, of sharing a meal together, of life as a community will be closed, never to reopen.

At daybreak the 80 tons of whale lay level on the land, although not particularly approachable with everyone butchering its meat into slabs. Some hunters kept certain cuts and gave others away to relatives and neighbors. Now the whole village stood in a landscape of snow, rock and flesh. Ameralda handed me a piece of muktuk — raw whale skin — and my teeth crunched through the cartilage until I could gnaw into the wad of blubber. I shook hands with Ameralda’s husband. He was tired. We were all tired. But with certainty everybody was proud.

The day I landed back in Nome, I took advantage of the recovered phone signal to call a friend who works with marine mammals. As I told the story, he began to tear up: “I understand that this is part of an important tradition, but I’m just thinking about how old that whale was when he died. It was probably about 200 years old.” The story of that whale’s life preceded the publication of Moby-Dick. Had the bowhead not crossed paths with the six skiffs that hunted it, it would have continued its life of antiquity until its natural death — until it became what my friend and others in his field call a whale fall — the moment a cetacean becomes a carcass and descends to the abyssal zone of the ocean floor. In its grave it continues to feed others by creating a complex localized ecosystem that supplies sustenance to deep sea organisms for decades. It becomes part of a life cycle on which others depend. Likewise, according to traditional Siberian Yupik beliefs, the bowhead that is hunted and whose body and skeleton is respected is destined to reappear in a new form in the cycle of revival.

It is easy for some of us to assume that the walls of our homes will continue to shelter us from the climate and that our groceries will always be abundant. Yet many of us already face natural disasters and debates over climate change, hunger and identity, resiliency and adaptation. Many of us are only starting to become sensitized to the earth and the challenges assaulting it. Why did Ameralda and her husband, her whole village, share food with others and even make the effort to nourish strangers? Their purpose is the same as that of the whales’ fate: there are advantages to nourishing others. In caring for our community hope rises, and others may see the resurrection that comes from shared burden and effort. It is the only way we have to reclaim our awareness that we are connected to each other and the rest of creation, forever intertwined in mutual stewardship.

This essay by Steven Salido Fisher was one of four second-place winners in this magazine’s 2017 Young Alumni Essay Contest. Fisher is a member of the Su Casa Catholic Worker, located in a former Franciscan friary on the South Side of Chicago.