When you live near the Chesapeake Bay it’s hard not to get lost in its mysteries. Go night fishing and you’ll see what I mean — the feel of a croaker pulsing in your hand when it bellows aloud, the midnight glitter of jellyfish sparkling below the surface, the out-of-body chattering of coyotes on far-off banks.

In the summer of my 10th year there were rumors of an unidentified creature moving among deer herds between the Severn and Magothy rivers. The animal was described as white, stump-legged, with a bushy tail. My grandfather, an experienced hunter, embellished the story, depending on his audience, describing the phantom as anything from a wild dog to a deformed stag to a ghost. 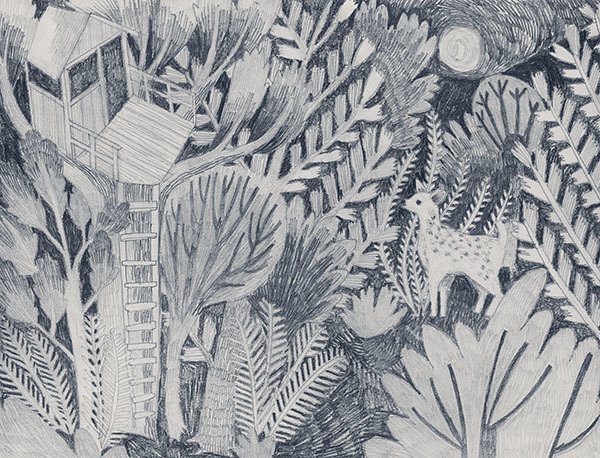 Growing up around rivers I had learned how to make my own bait by scraping grass shrimp off cattails, and I caught my share of stripers. But the idea of something big and mysterious, moving on land, captured my boyish imagination.

So every dusk during that June, I clambered down the ravine that led to the Severn and sat in a tree fort I had built with my brothers. It was the summer before middle school, before girls, before grades got serious. The old fort wasn’t quite abandoned yet.

The path, a well-worn deer trail, was secluded, except for an ancient hunting cabin that the creeper vines had pulled halfway into the mud, like an upturned ship. It was a reminder of the days when the neighborhood was a wilder place.

Whenever we walked the woods my grandfather liked to say that nature was a “covetous neighbor,” so eager for reparation at the slightest offense and so inscrutable in its patience. Yet, to him the wild was legible in some peculiar way and there were lessons to be understood. As I trailed behind him on our many adventures, I was privy to his most distinguishing characteristic other than storytelling — a cowlick on the back of his neck that resisted the shock of white hair on the top of his head both in direction and color — like a splatter of black paint on a white canvas.

Grandad had joined the Navy at 19, traveled the world and married an Italian girl, my grandmother. To me he was a man of grand adventures. When he returned to the United States, he made a career for himself as a musician and police officer; making music on our back porch with an accordion and along the backwoods of the Eastern Shore with a Winchester Buck as we chased a pack of whitetail.

But his greatest instrument was his eyes. At the age of 70 he read the woods like scripture. Hidden in underground springs and dark grottos he saw life ebbing and flowing. Spotting a snake on a foot trail or a snow owl on a winter day was routine for him. His perception of light, shadow and movement was like some kind of forest magic. Heredity hadn’t imparted me with such gifts. I was the only person in my family who wore glasses.

Still, that June, dusk after dusk, I lay flat on my belly in the makeshift tree fort. In the tedium of the forest I imagined I could hear the murmur of underground aquifers pumping fresh water into the Severn, and the flap of mud carp in the shallows. As the sun set across the river, casting long shadows, I felt the age-old dread. Then I remembered my grandfather’s words whispered to me across many a tree stand that made my fear of the dark go away.

“Look up at the stars,” my grandfather would say. “You’re made of the same stuff.”

He would then explain that the carbon, magnesium and calcium that make up our bodies was originally manufactured in the interior furnaces of stars, freed in that first eruption that set the universe in motion. And before the stars, he said, nothing else was made, only eternal things.

The man had a knack for unlocking the creative imagination.

Suspended above the forest floor on one particular night, my feet dangled perilously in empty space. Then the sun dipped below the tree line and the lights went out. The world around my narrow perch was submerged in darkness. Panic set in.

I held my breath. In the intimacy of the ravine I was suddenly awash in the stench of dead things lapping in sea grass and live things crawling in the dark. Darkness, with its power of disguise, is a deceiver, I told myself, a levity amidst the stuff of stars. Slowly, my eyes adjusted to the gloom.

A twig snapped. Among the brambles there was movement, motion that became a haze of white fur entering my line of sight. Hobbling on the perimeter, the disfigured creature trailed a larger, duskier herd. Its abnormalities were pronounced. Most people will never lay eyes on a piebald deer. Experienced hunters with a lifetime in the woods don’t believe it when they see one. Conventional wisdom associates the “piebald” condition with a genetic defect. Observable abnormalities include bowing of the nose, scoliosis of the spine and short dog-like legs. It struck me that she was at a perilous disadvantage in the wild, not just because of her asymmetrical coloring, but for her obviously diminished physical strength and size.

Too often I had complained to my grandfather about my faulty eyesight, my slight stature and my recessive personality. In my mind I was comparing myself to the man who had led me on hunts across remote byways and mesas. He was strong and articulate, and his eyes, well, he could see things others couldn’t. Why, I asked him then, were some creatures made smaller, weaker than others?

“To make manifest the glory of God,” he answered.

So that night, suspended like a hunter in a deer stand, I applied the lessons I had learned. Feeding just before dusk, deer interpret pockets of air, called thermals, with their sense of smell. Thermal currents move uphill as the temperature spikes each morning and downhill as temperatures drop in the evening. My grandfather also claimed that each herd appointed a watcher, a deer tasked with standing guard as the herd grazed.

From my perch I could feel the slow draw of cool air from the mud bank below. Alerted, the piebald shifted its head, then stomped its fore-hoof. The herd immediately turned and looked up at me hovering above them, then scattered without a sound.

In the years since the night I saw the ghost deer, I have grown taller and my grandfather has gotten shorter. My eyesight hasn’t improved but along the back of my neck a cowlick has developed, a splatter of unruly hair.

We seldom hunt the woods anymore, but on summer evenings we sit on the back porch and watch the river. From time to time my grandfather will spot a stag rutting along the tree line. He can still read the woods like scripture.

As for me, I’ve developed a knack for telling stories, though I don’t yet have my grandfather’s ability to navigate in the dark. What I have come to see is that hidden behind the surface of things is a world of light and shadow, of complexity and meaning that whispers of moral instruction. Across the generations the most profound lessons have been transmitted.

“Life is the sorting through of stories,” my grandfather says. “Growing up is deciding which ones are true.”

When I return to that night suspended above the ravine, I recall the chattering of coyotes from a distant shore and the sudden clarity I felt staring into the dark. The rumors of a strange creature moving among deer herds were true.

In the twilight, after the herd had scattered, only the ghost deer lingered, as white as a lamb, nibbling on scrubs, affording me the opportunity to meditate on her beauty and fragility. In a pinch she would offer herself as ransom for the herd. It was her destiny. But not that night.

That night I recognized that chance and heredity were driven by the same maker; that the creeper vines would soon swallow the old cabin in the woods; that a ghost deer had claimed the summer of my 10th year.

John Singleton is a technology consultant. He and his wife, Karen, live near the Severn River in Maryland with their three sons. Their oldest, Michael, is a rising senior at Notre Dame studying finance and theology.