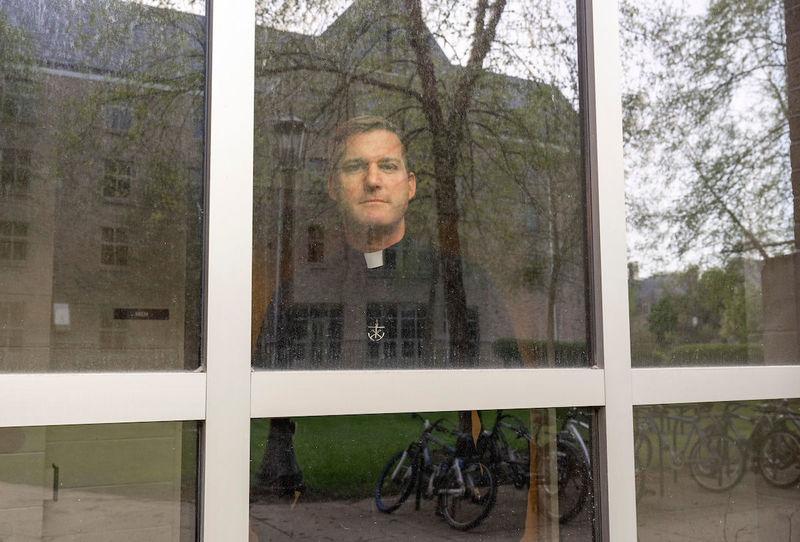 Fr. Nate Wills, C.S.C., at Keough Hall, where he self-isolated after testing positive for COVID-19. Photo by Barbara Johnston

The priest’s fever would lessen during the day. “Then it would come back with a vengeance in the evening,” he said. A few days later, he lost his senses of taste and smell, another symptom of COVID-19.

Wills immediately went into self-quarantine in his room in Keough Hall, where he is the priest-in-residence. He contacted health authorities and was tested. He was told he would receive results within seven days, but it took 10 to learn he tested positive for the virus. By that time, his symptoms had subsided.

Wills contacted friends he had spent time with in the preceding weeks to let them know he had tested positive. No one else he knew got the virus.

He doesn’t know where he caught it. The assistant teaching professor in Notre Dame’s Alliance for Catholic Education program had been on a work trip to a school in Florida about 10 days earlier, but he thinks he may have caught the virus at Notre Dame. Among other activities, he was the celebrant at the last Mass at the Basilica of the Sacred Heart before the pandemic prompted suspension of public religious services.

Wills’ fever lasted 10 days and his cough continued for a few days after that. He recalls a bad case of pneumonia he had while in high school. “I thought that was the worst. That didn’t hold a candle to this,” he says of the severity of COVID-19.

During Wills’ quarantine, meals were delivered outside his dorm room door. He kept in touch with the world by phone. As chaplain of the football team, he heard regularly from players and from Keough residents who had returned home. Friends and their children would stand on the lawn outside Keough, where he could see them from his window. They held up signs offering cheer and encouragement.

“One of the hardest parts about this disease is you have to be alone,” Wills says. “My greatest fear was spreading it to someone else.”

He continued to self-isolate for two weeks after his symptoms subsided before he resumed being around other people. During the shutdown, Holy Cross religious ate meals and celebrated Mass together while maintaining social distancing.

In early May, Wills again contacted local health authorities, seeking to be tested for antibodies that would help others stricken by the virus. As a survivor, he was able to donate plasma and platelets through the Red Cross COVID-19 Convalescent Plasma Donation program.

Soon Wills, 43, was healthy enough to resume his daily running regime. The spread of the illness is teaching us lessons, the priest says. “We’re becoming more aware of our interconnectedness and interdependence. We really do have to care for the most vulnerable.”

In recovery, Wills stayed mostly on campus, although he made a couple trips to the grocery store wearing a face mask, as recommended by health experts. “I wouldn’t think of going into a public place without a mask,” he said. “We don’t know how many lives we’ve saved by social distancing.”