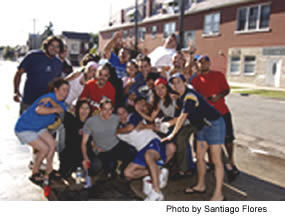 Rev. Virgilio Elizondo starts with a love story when he talks about the relationship between Latinos and the Roman Catholic Church in the United States. In the story, Elizondo’s father saved money to buy a small grocery store, but his future wife dreamed of wearing a beautiful wedding gown. So he gave her his savings, wanting to make her happy.

The bride-to-be then searched for the perfect gown that would show her husband-to-be how much she loved him. She chose a dress that was less expensive because it was damaged. Then she mended it. After their honeymoon, she returned most of the money to her husband so they could buy the store.

At its best, the relationship between Latinos and the Catholic church in the United States is similar to the mutual giving that marked his parents’ love story, says Elizondo, a visiting professor of theology at Notre Dame whom Time magazine has hailed as one of the leading spiritual innovators in the country. When Latinos arrive in the United States, they flock to the Catholic church, an institution that has been at the heart of their lives and which now often eases their transition to a new country. In return, Latinos offer the church in America gifts that promise to make the union strong and lasting.

Start with the impact the sheer number of Latino immigrants has had on the church, and will continue to have in the 21st century.

“The churches that were empty or losing people are being filled by Latinos,” Elizondo says. “And most of our people are young people. There is a natural increase in the population of Latinos because immigration continues and Latinos like to have children.”

Still, Elizondo insists that Latinos’ greatest impact will be to re-energize the American Catholic church.

“They’re excited about being Catholics,” says Elizondo, who is considered the father of Latino theology in the United States. "There are several influences that Latinos bring to the church. The first is a love for tradition. Tradition in the sense of having a life force—a sense of continuity with ancestors that gives us strength to move confidently into the future. There’s also a strong sense of personal devotion for Latinos. It’s not just a religion of the mind but a religion of the heart. A whole sense of _corazon_—something not just that I know but something I feel deeply that moves me to action.

“Latinos also bring a great sense of family. In Latino churches, you see the abundance of little children, teenagers and the elderly all coming together. The church itself is an extended family, and there’s a great sense of hope and joy. Religion as celebration of life. There are the popular rituals, too—Christmas processions, Holy Week processions, All Souls’ Day—the rituals that really bring the Gospel alive.”

Life in the church also centers around imagery for Latinos who find meaning in religious statues, paintings, murals and stained-glass windows.

“We like to see things. The church (in the United States) has downplayed images for the sake of the verbal word. Latinos bring the sense of image—the word became flesh. It’s re-introducing to U.S. Catholicism the importance of good Biblical imagery and even the saints as role models.”

The blending of Latino and American cultures has begun in the church in the United States.

“The church is very aware that it’s multiethnic, multilingual. The church is working toward a real spirit of welcoming inclusion. Nationally, that spirit is picking up, but there are practical questions about how you blend different cultures. Some parishes have Vietnamese, Latino, Korean and mainline people. Vietnamese like to worship in more meditative ways. Latinos like to celebrate more festively. How we blend this is going to take a lot of practical wisdom and experimentation.”

His parents’ grocery store offers an example of how the blending of backgrounds can be achieved.

“Maybe it’s because the prices were good, but we had customers who were white Baptists, African Americans, Jews and Catholics. And they were all friends. The thing I remember most is, everyone had the best jokes about their own churches and ministers. We were laughing with each other. I grew up believing we were all religious.”

He also believes in the leadership role Notre Dame has taken to educate Latinos as future leaders. He saw the university’s commitment blossoming in 1997, the year he received Notre Dame’s highest honor, the Laetare Medal.

“I’ve been here since 1998. They recognized Latinos are a significant part of the Catholic population in this country. As a major Catholic university, they felt they would be remiss if they didn’t prepare Catholic-Latino leadership for all fields.”

“As our numbers grow, so does our responsibility to be of service not just to our own but to everyone in the church and in our society. To do this, we have to have a well-formed and well-educated group of people. I see the whole Latino thrust as continuing the beautiful tradition of Notre Dame—of reaching out to the immigrant poor, like it did in the past with the Irish and other groups. Notre Dame believed in them, gave them a great education, and they became great leaders who contributed to the country and the church.”

John Shaughnessy is a feature writer at the Indianapolis Star.