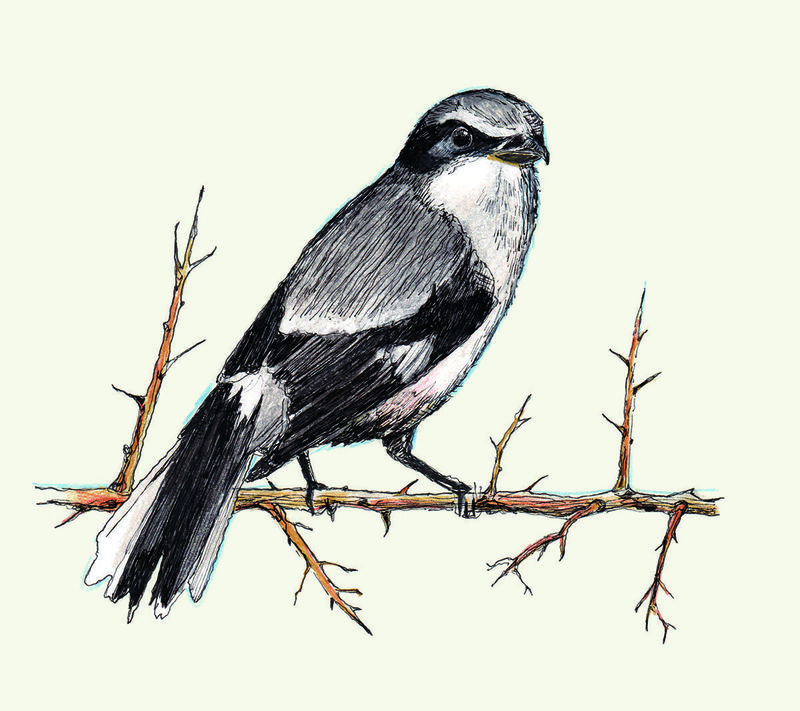 On the fifth anniversary of S’s death, I hiked over to Furry Friends Bizarre Bazaar in the tumbledown cottage across from the bowling alley. “All proceeds support homeless and abandoned animals.” In a pile of castoff art I spotted a watercolor in an ornate gold frame: “Loggerhead Shrike and Hawthorn.” A grey bird with a raccoon-like mask against a backdrop of red berries and green leaves. Where its weirdly foreshortened feet grasp a thorny branch is a faint, coppery stain like a thumbprint. “Vulnerable to extinction, this robin-sized bird may be spotted in orchards, grasslands and open spaces.”

Whenever obsessive-compulsive disorder spun my friend out we’d hightail it into open spaces. I could always tell by S’s voice on the phone if he was agitated, paranoid or both. Ambushed by intrusive thoughts, he’d spin monologues full of mind-numbing minutiae. Physically, S resembled an aging Huck Finn. Faded copper hair under an International Cheese Company or Malta Bake Shop newsboy cap (swag from his favorite local shops), a thermal parka in springtime, a moth-eaten cardigan in fall. A former environmental reporter, S wrote extensively about broken promises: frustrated Algonquin First Nation land claims, the stealth-incineration of atomic waste, withheld health care assistance for atomic bomb victims. Then came the sucker-punch of overlapping anxiety, depression and OCD, followed by admission to a psychiatric ward for observation. “We’ll give you something to help you sleep,” the young intern would say. A revolving door of psychiatrists and social workers diagnosed OCD, early childhood trauma and possible autism but couldn’t unravel his constant sadness. While taking high-dose antidepressants, S stopped writing altogether.

One windy morning in late March, I convinced S to leave his apartment and take the Kipling bus down to the lakeshore. He showed up overdressed in an expedition jacket and Sherpa beanie. Heavy-lidded eyes, deeply lined face, gaunt as in the Irish saying, “He’s so thin the grass doesn’t know of him walking over it.” But S and I did walk over the grass. By the time we were done, we had walked a cobble beach, wooded shoreline and teeming marsh. But first we stumbled around the grounds of a Victorian-era psychiatric institute.

I had unwittingly chosen the site of Toronto’s former Asylum for the Insane, its original outer walls completed in 1861 with the unpaid labor of psychiatric patients, to enclose a sprawling property. The main cottage, which once housed a kitchen, laundry, chapel, bake shop, carpentry shop and amusement hall, was demolished in 1975. According to a heritage plaque, passive forms of therapy included reading, conversation and calming walks in the park.  I visualized a lockstep circular trudge overseen by key-jingling Victorian wardens but kept that thought to myself. Any irony would be lost on S. He was already off somewhere, his mind in constant flickering flight.

We moved past the yacht club basin, along the windy shoreline and through a meadow glimmering with early spring light, S dragging his feet like a condemned man. Once an avid wilderness camper, he kept stopping to catch his breath. We hiked through wetlands full of chorusing peepers. “Hey look!” I said when we reached an observation tower. Turtles were basking on sandbars and fallen logs. S stared at the “Endangered Species Fun Facts” sign for what seemed a long time. (“Blanding’s turtles survive without oxygen. A highly sensitive species that requires a high-quality habitat.”) A watery moon floated above the tree line as we waited for the bus to take us back to the city. The wooded understory rustled with unseen creatures, birds and animals passing through on their way somewhere else.

Now, years later, I have placed the loggerhead shrike print on my desk beside my special origami box and Kente cloth postcards. I wondered about the significance of the hawthorn bush then put it out of my mind. The following week, I got a shock when I read that the shrike is the avian world’s Vlad the Impaler. According to the Cornell Lab of Ornithology, “Lacking a raptor’s talons, loggerhead shrikes skewer their kills on thorns or barbed wire or wedge them into tight places for easy eating.”

It turned out the lovely hawthorn in my watercolor print serves as a handy spike for the shrike’s stash of insects and birds after it guillotines them. To hold its prey secure while eating it or to store it for later consumption, the shrike tears the flesh into smaller morsels which it spears on a sharp object . . . often the top of a convenient thorn tree. A greedy bird fond of killing, it stashes away more than it needs.

Saddled with an illness that defied classification, S had weaned himself off Prozac and clozapine. That was the Year of Hoarding: Towers of unpublished manuscripts, shelf-toppling reference files overflowed his co-op apartment. Wherever he went, S carted an outsize backpack crammed with dated scholarly articles. A submerged part of his personality — outgoing, curious, affable — resurfaced. When we’d meet in the subway, he’d be chatting up the security guard, the accordion-playing busker and, once, a bemused Jamaican cleaning lady who said she’d be sure to include him in her evangelical prayer circle.

In the eighth century, The Venerable Bede compared human life to a sparrow’s agitated flight “in at one door and immediately out at another.” Eight years into a 10-year depression, S emerged from his dark apartment to host informal salons at a local coffee shop. A half-dozen activists, thinkers and musicians came together in west end Toronto to share updates on social and environmental issues while enjoying Crystal Donuts’ $6.49 Big Breakfast Special. A harmonious collective that ebbed and flowed, following S’s lead like starlings that twist and turn and change direction in response to an invisible cue.

Skeptical about the loggerhead shrike’s gruesome reputation, I contacted my friend Alfred. “Oh yeah,” he said. “That grisly part is true. Once I was cycling home. As I pedaled uphill, a shadow swept over me and a puff of feathers exploded above my head. I saw the shrike, its prey neatly impaled on a sharp-ridged branch at the top of our old Chinese elm. It had taken out a songbird with deadly force.”

S verbally sparred with all of his doctors and usually wore them out. One week after he died in a lakeside hospital from complications of prostate cancer, the patient care manager convened a special staff meeting to review “important lessons learned” during the months S was in their care.

The following summer a heat dome lay over southern Ontario. I set out one morning at first light and hiked the wooded shoreline near Tiny Marsh on the cusp of the Canadian Shield. The entrance sign at Matchedash Bay reads: “A Wetland of International Importance . . . 131 breeds of birds.” I scrambled over limestone bedrock and parched savanna grass. In an open area dotted with spiny shrubs, I saw what looked like strips of dried jerky skewered on a thorn bush. The remains of small songbirds displayed like trophies.

Al says that S’s spirit is hovering around the memorial tree we planted in an arboretum overlooking Nottawasaga Bay. An American sycamore, it exudes a magnetic force. Self-exfoliating bark that resembles camouflage, fuzzy fruit like Ping-Pong balls. Viewed from a distance, its canopy resembles a six-branched menorah. Long after we are gone, migrating birds will perch in its leaves and nest in its hollow trunk. Juncos, woodpeckers, flycatchers, barred owls.

S never appears to me in dreams. It’s impossible to know what he’d say about my donating his copies of Malcolm X, James Baldwin, Stokely Carmichael and Richard Wright to a little-known Black history museum or his owlish specs to an optician who ships refurbished eyeglasses to developing countries. But there on my desk sits the loggerhead shrike — wings folded, hooked beak retracted. My secret totem.

Anne McGouran’s essays and stories appear in Gargoyle, Smart Set, Mslexia and other journals, and her work has been cited in Best Canadian Essays. She lives in Collingwood, Ontario, where she has developed a fascination with ice huts and orchard ladders.