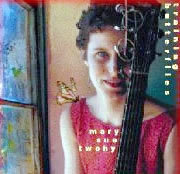 Mary Sue Twohy ‘91 had an epiphany at a smoky bar in Arlington, Virginia, in 1996. “All through my first song I could hear the clink of glasses and the voices of people talking,” Twohy says. "So I set down my guitar and sang ’Sweet Mercy’ a cappella. The crowd went nuts." When she stepped away from the mike, she realized her career as a folk musician was about to skyrocket.

At the time, Twohy was relatively unknown in the world of folk music. But several years later she continues to make inroads into the industry. The Washington, D.C., resident clinched the Washington Area Music Association’s Best New Artist Award in 1999, has produced two CDs and is at work on a third, and has been lauded by such critics as Mike Joyce of The Washington Post for her compelling lyrics and appealing delivery.

Not bad for a woman who had intended to be an IBM sales executive.

Twohy grew up listening to her father, James Twohy ‘61, sing folk music in a church choir in Aberdeen, New Jersey. She first realized she wanted to become a singer on a warm Arizona night in 1989 when she heard Maura Geissler ’84 sing “Autumn Night,” written by her brother, Mark Geissler ’86.

“I was at a concert on the back porch of The Catholic Worker in Phoenix the summer before my junior year at Notre Dame when I heard Maura sing a love song written by her brother,” Twohy recalls. “The song was so beautiful; I wished I could sing and play like that.”

That wish inspired Twohy to grab a guitar and start picking. In exchange for homemade cookies, Twohy received informal guitar lessons from fellow Domer Cletus Kennelly ’84. Twohy chose folk as her genre because she was familiar with the style of music. "Folk music is lyric-oriented; it’s about people and grass roots," Twohy says. “I think people are attracted to this type of community music—music that is by and for the people.”

Like other folk artists, Twohy draws on personal experience when writing music. The lyrics for one of her songs derive from her father’s battle against meningitis in 2003. Another, “The Risk Involved,” explores the sensation of falling deeply in love. That won the “Best Song of the Year” citation in 2002 from the Washington Area Music Association.

The singer-songwriter had an inauspicious start at a deli in Rapid City, South Dakota, in 1991. “I couldn’t even finish my song, I was so nervous,” Twohy says. She apologized to the crowd and returned to her table to the sounds of “sympathetic applause” before driving back to Pine Ridge, South Dakota, where she was teaching on an Indian reservation. In subsequent years she juggled a full-time job at a not-for-profit in the nation’s capital with frequent singing gigs, which netted almost no income. Once, at a folk concert in Annapolis, Maryland, she earned a “nice slice of homemade pie” for singing two songs.

But persistence paid off for the soprano. By 2002, she had sold some 3,000 CDs and watched as sales of both her records — Training Butterflies and The Risk Involved — went to second pressing. Twohy also was making a name for herself as an entrepreneur. Two years ago she opened her own national music publicity company, BTM Communications. Now she helps other folk and country artists garner media coverage—all while maintaining a rigorous touring schedule of her own, which includes being on the road several times a month.

Twohy has been compared to such female folk-music powerhouses as Sarah McLaughlin, Nanci Griffith and Iris DeMent. Tom Shakeshaft, a federal prosecutor in Chicago, first heard Twohy, who is 5-foot-2, sing at a birthday party for a friend in Washington, D.C., four years ago. “What’s so amazing is that she is such a small person, but her voice just fills the room,” says Shakeshaft. He was so impressed that he offered Twohy financial assistance to produce her second CD. “Hearing her play live is a powerful experience. You can’t stop wondering where that voice is coming from.”

Twohy is grateful for the success she has achieved in the industry. One of the first songs she ever recorded is a paean to the patron saint of musicians, Saint Cecilia.

Twohy’s CDs can be ordered through her website at www.marysuetwohy.com, through Barnes and Noble or Amazon.com or by writing Twohy at P.O. Box 11430, Takoma Park, MD 20913_.

_Ruth Ann Keyso-Vail ’91 is a freelance writer and photographer and the author of Women of Okinawa: Nine Voices from a Garrison Island.