Forty years is a long time to wait to see old friends, but then it’s all the sweeter. Such was last summer’s “Olden Domers — You’re on the Cable Car or You’re Not” ND/SMC Alumni Caper in San Francisco, that clean and casual city where the counterculture first took root.

Traveling from Maine I’m one beat puppy on arrival, but suddenly there’s electricity in the air. California sunshine filters down a tilted street in the Castro. Old Victorians nestle together with ornate facades, bay windows, secret gardens. I can hear The Freewheelin’ Bob Dylan coming out a window. Right up the steps to Betty Doerr’s house, and what a blessing to find we’d all made it, soul travelers to an unforgettable rendezvous. Only thing, it ain’t the ’60s anymore — we’re in our 60s! Maybe, someone comments, we can get a group rate on walkers.

There’s no friend like an old one. We’ve kept in touch by Internet or the occasional call, best we can. While not all of us gathered were ND students, most of us, too, walked the Main Quad 40 years ago, ate South Dining Hall food and wrestled our sheepskins from the arms of academia. Hello Denny Willette, Betty Doerr, Tommy Wishing, George Koszis! Long, warm hugs. Thus began a four-day nonstop conversation, sometimes in whispers, sometimes in rollicking laughter. Memories from back in the day and what happened on the way to the airport. (Thankfully, no one was strip-searched. When you reach our age, no one much cares what you do or what you say — a marvelous blessing.)

Back in the Stone Age, the late 1960s at Notre Dame, there was an underground. 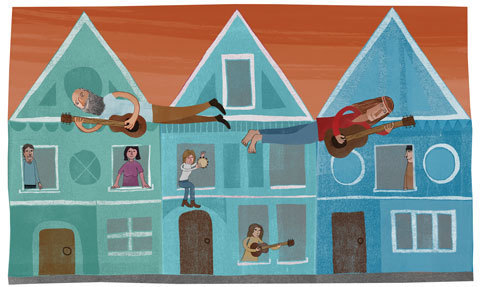 English majors, artists, none of us really fit the mold. Our heroes were novelists, poets and musicians rather than athletes, politicians or military folks. But back then Notre Dame was hardly a place where you’d rock the boat. Really? We would protest the Vietnam War openly, grow long hair, form rock bands and bring radical speakers to campus, to the dismay and disgruntlement of our student brethren. God help you if you had long hair — you could get beaten up. We found the University’s conventionalism a bit stifling. It was as if to be a real ND student you had to believe a lot of things we didn’t. Wildly outnumbered, we persisted in weaving a tiny thread into what would become the counterculture. We united in those early years, making friendships that have lasted a lifetime. It was a turbulent era that would eventually end the war, fulfill civil rights and bring alternative values for millions into view.

People shuffled around Betty’s comfy Victorian, running into each other, while stragglers drifted in. Out back, the smoking terrace provided a 4th floor view of neighbors’ exotic gardens, rooftop hot tubs and palms wafting in the wind. Great for spying.

For a city, what a cool neighborhood. The Castro district is teeming with life. Down the way, outside a coffee shop packed with techies, bankers, artists, gays and street people, I chatted with a neighbor kid. Twenty-something, easy smile, flip flops and long hair. Except he makes about a quarter million a year as an engineer in the Silicon. Welcome to 2013.

Back at the hacienda, 20 acoustic guitars had turned up and people were singing: “For What It’s Worth,” “You Are My Sunshine,” “Ripple,” “Just Like Tom Thumb’s Blues,” “Just Like a Woman” and “The Wind Cries Mary.” Displayed on a dining-room table was our ’60s altar — old yearbooks open, articles from the South Bend Tribune and The Observer about the big raid at the Delphic Oracle, Vietnam protests, SDS and the academic double standard. An original poster of the Anti-Military Ball in 1968, now probably worth thousands on eBay. What mischievous little rebels we were. We all collapsed, laughing, seeing the mustache somebody had inked on a Saint’s Mary’s nun. Saint Mary’s girls — bad. Now, where are my glasses? Oh, I’m wearing them.

There were memorials to friends passed on, like Charlie Wordell, Kathleen Cecil-Wishing and Eddie Kurtz. A series of crinkled Polaroids recalled a certain clandestine gathering in Dillon Hall, winter break, 1966. I remember it well. There we were with our female SMC sidekicks, making out in an empty dorm. Bill Johnson singing Tom Rush songs. Betty wore Ray-Ban aviators, pretty stylin’ for old SMC. We looked like kids. That’s because we were kids.

Ours has not been the conventional road. No one was selling cars or real estate. Nobody went hunting for money. We became graphic artists, directors, editors, teachers, builders, musicians. The values that have bound us together are creativity, persistence, adventure, a sense of community, a respect for the Earth and an eye for justice. Of course one’s sacrifices become clear with age. No corporate jets or yachts, but we seem to have inherited those gifts of aging gracefully, wisdom and acceptance, which deepen as resentments fade. Perhaps it’s a different sort of wealth we sought: choosing where we wished to live; work that’s ethical and satisfying; and plenty of time for life’s many sidebars. Beyond it all, you can’t beat the bright eyes and handshake of an old friend.

Tom Wishing prepared a Fourth of July feast: chicken, ribs, beer, wine, salads and desserts extraordinaire. Betty: “Hey, I’m drowning in paper plates and napkins here.” After dinner, a walk up the hill. Destination, Corona Heights. Climbing rope and carabiners seemed called for. “One more street.” “Ugh, ugh,” “Cabs are for sissies.” Tell it to my heart doctor. Finally on top, hundreds of feet above the city, we huddled in clusters, soon to be dazzled by the best fireworks ever. Leave it to the techies. Two barges a mile apart, down on the waterfront, a guy with a laptop somewhere in between, and, bingo, an hour of duplicate sky-topping explosions! Crouched together in our parkas against the evening wind, under a sky exploding in rainbows, my arm around my girlfriend from 1967.

Friday, cable car to North Beach. I wanted to visit City Lights Bookstore and see the old black-and-white photos of Lawrence Ferlinghetti, Allen Ginsburg, Jack Kerouac, Gary Snyder, William S. Burroughs, the beat generation. Men who set out in whole new directions, like Jack London before them. Men who wrote to say no to a culture they felt no part of, commercialism, racism and useless war. I stood in front of the bookstore for a snapshot, consumed in that special satisfaction of realizing an old hunch had been right. That change would come.

Saturday we were whisked out to Fort Funston Beach with Betty at the wheel of her speeding green Mini. Clear the way, oldsters at play. Descending huge bluffs overlooking the Pacific, I stuck my toes in the cold, green ocean. Something about an endlessness that man can’t dominate. People on horses passed. Dogs leapt in the air snatching Frisbees. Paragliders soared slowly above us, like giant seagulls in the steady wind. That day’s conversation sure covered a lot of bases. Up top again we hesitated on a large flat area, watching a glider circle and circle. That’s when somebody informed us we were standing on the airstrip. Oh.

Chinatown! Seventeen sitting down at Kan’s for plate after plate and multiple bottles of vino. Please choose six of everything. “Remember at Holy Cross Hall when the nuns would flash the lights at 11 p.m.?” “Remember when Ted the Head greeted the first ND girls on the South Quad, September 1972?” (Lucky if you had one girl in your class.) The Cantonese feast extended for hours, and the waiters never tried to get rid of us. Outside, old men played Kabuki music in the street. They don’t care if you toss a coin.

Although we’re a small part of the Notre Dame family, our exploits don’t appear in Class Notes. Ah, well. Tailgate parties, ballgames, cocktails, corporate promotions, top-secret government work. What could we possibly add? Recovered from alcoholism 20 years ago? I’m beating stage 3 cancer? My brother just won the National Book Award? My kid’s in jail? This, too, is life. It’s orchards, sailing, living in Bali, woodworking in my barn in Maine. It’s the poetry and music. It’s that welcome bedfellow, hope, that resides in the willful heart.

Our stories? I lived on small islands offshore 25 years, as a writer and a carpenter, a unique experience by any standard. Ever go to work when it’s blowing 125 mph? One of us adopted two South American babies and brought them up, making a lifelong connection with magical, remote cultures. One became a master metal sculptor, winning awards and a lucrative clientele. Another is a graphic artist in Chicago, another a New Orleans troubadour. Tommy leads one of SF’s best blues bands. Which brings me to Saturday night’s finale, Tom Wishing and the Tornotics’ Voodoo Stew.

Standing room only for a seven-piece band knocking out “Red Dress” and “Walkin’ the Dog.” Tom’s son Devin playing guitar right next to dad. The indelible Noam Cohen blowing crazy good harmonica. Fiddler David James of South Bend blazing through Irish trills inside 12-bar blues. I sat in on bass. Some of us have been playing rock ‘n’ roll 50 years. There’s no escape. (Tommy and George K. and I lived together on Ivy Road in 1969, from which sprang Tommy and the Tornadoes and Captain Electric and the Flying Lapels. Anyone recall that golden age?) I whispered to Tom, “Remember when we left the TV on with no sound for two years?” “Yeah, until it burnt out!” he cracked. Oh, the sorrows of the South Bend landlord.

The spontaneity of San Francisco means anything can happen. At 10 a.m. Sunday morning outside the de Young Museum, in the park, we’re waltzing to big band music from 1940s. A new religion? Something about that sunshine makes you want to dance. A museum walk and then, on the ride home, I insisted Maralissa Thomas swing down old Haight Street. Wow, flashback. It’d been 46 years since I stood on those sidewalks, a kid busking, guitar case full of coins, not a care in the world. Those days will never come again — for us. But carry on, kids.

Sunday afternoon we waited for outbound flights, the only regret was that it took years to make this happen. Don’t you wait. Find those old pals and go see them. You can do it. For those few days, resting on our laurels, it felt like we were at the helm of a clipper ship sailing a sea of hallowed memories. I can tell you, the innocence hangs on. There was so much love in that house it spilled out the windows and down the street. A road to gratitude for the gentle love of old friends and the tolerance and patience it takes to hit the golden years in stride. And to think, we were never alone.

Dennis Lopez moved to Rockport, Maine, after 25 years on the offshore islands. He is a writer, carpenter and musician, and can be reached at beachglas@roadrunner.com.