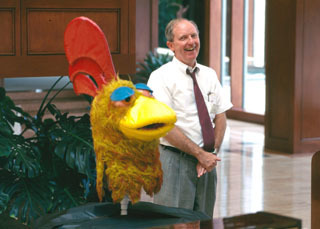 As sometimes happens in life, I was looking the other way when Jim Naughton died.

The career journalist passed away August 11 — of cancer at age 73 — when I was on vacation. The loss is just now sinking in. His life offers good thoughts on a Labor Day. Here’s why.

James N. Naughton ’60 began his newspaper career at the Cleveland Plain Dealer where in 1967 his writing caught the attention of New York Times correspondent Gene Roberts. Naughton would go on to write for the Times magazine, then join the paper’s Washington bureau in 1969. He and Roberts would become lifelong colleagues and friends.

In fact, in 1977, when Roberts took over as editor of the Philadelphia Inquirer, he asked Naughton to join his management team — and the paper’s staff would go on to win 17 Pulitzer Prizes over the next 18 years. “In many respects, he was the very soul of the paper. It would be impossible to overestimate his contributions,” Roberts would say of Naughton who held a series of senior editor positions there, including executive editor.

Naughton was a leading light during the hallmark days of American journalism and was a proud champion of the profession as his beloved industry suffered over time from forces inside and out. He was also steadfastly loyal to his reporters. “The role of the manager,” he once said, “is to get the bureaucracy out of the way of the people going after a great story.”

As the Inquirer’s national-foreign editor in the late 1970s, with almost no budget for foreign news, he kept Richard Ben Cramer in the Middle East for a year with funds diverted from building maintenance. In 1979 Cramer won the Pulitzer for international reporting.

Prior to his years with the Inquirer, Naughton covered the national political scene and the White House for the Times, with his keen reporting and graceful writing earning him the respect of both politicians and peers — and a prominent seat in Timothy Crouse’s The Boys on the Bus, a book about the 1972 campaign press corps.

Naughton covered the presidential campaigns of Muskie and McGovern, Spiro Agnew’s resignation, Watergate and Nixon’s demise, Ford’s defeat in ’76 and part of Carter’s presidency (prompting him to quip that he was the Times’ expert on political losers).

But even a more thorough review of all these professional accomplishments would tell only part of the story. Those who knew Jim Naughton would enjoy much more talking about the merry prankster who thought work should be fun.

Most famously, Naughton became a national story when he covered a presidential news conference wearing a chicken head — much to the bafflement of President Gerald Ford who was on the campaign trail. On a dare by Ford chief of staff Dick Cheney who said he’d be chicken not to ask Ford a question, Naughton donned the chicken head but was not quite able to pronounce his intended remarks: “Mr. President, your campaign puts me in a fowl mood.”

“I couldn’t believe it,” Ford would later say. “Then I heard it was Jim Naughton, and that explained everything.” Tom Brokaw recounted the tale years later at Ford’s memorial service. And the chicken head is now on display at the Ford Museum in Grand Rapids, Michigan.

On the campaign circuit in 1976, Naughton slipped a live sheep into the hotel room of a Newsweek correspondent — a prank he submitted in his expense report to the Times as a $5 “ewe rental” (which the paper covered).

When his longtime friend Gene Roberts stepped into his office bathroom on his 46th birthday, he found 46 croaking, leaping bullfrogs awaiting him.

Naughton would walk through the newsroom wearing wacky hats and silly shoes, kept a cackling, egg-laying chicken machine in his office and once got colleagues to dress like babies when a staffer returned from maternity leave (to help her feel more at home).

“I did my part, mostly through tomfoolery-by-example, to provoke giggles,” he wrote in a 2011 memoir, “and I want to spread the gospel of workplace fun before the efficiency experts have been allowed to squeeze the joy out of work everywhere.”

When Naughton retired from the Inquirer in 1996, he came to his farewell event disguised as a brown dinosaur. “I didn’t want anyone to see me cry,” he said, partially explaining the costume.

From there Naughton went to the Poynter Institute, a journalism think tank in St. Petersburg, Florida, where he served as president and resident prankster until 2003. When he retired from Poynter, he hired the famous marching ducks from the Peabody Hotel in Memphis to make his farewell walk with him.

“As long as I am able,” he wrote in his memoir, “my plan is to laugh death in the face.” Indeed, he once showed up for cancer treatment outfitted as a sumo wrestler, telling the technician the radiation treatments made him look that way.

Jim Naughton was a pro’s pro who labored long and hard to perfect his craft and to apply its noblest principles to the common good. But he also found joy in the workplace and shared the fun with those who joined him there. That’s a lesson we all could take more seriously.

The 1996 photo of Jim Naughton with his chicken head was taken by Ric Ferro.