So this is how it worked back then.

I took a cab from the airport after flying from Shreveport to South Bend. I asked for a ride to Notre Dame, to Farley Hall. I was a freshman from Louisiana, knowing no one on campus and expecting no welcome.

I was on my own, stepping into the independence that was college life in 1970. 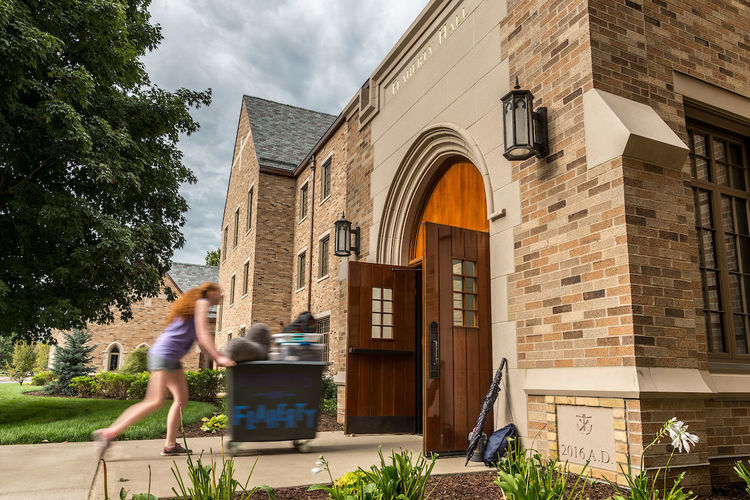 Somebody handed me a key near the entrance to Farley, told me I was in room 204. It was a quad; I would have three roommates.

I found the stairs and found the room and saw clothes and personal belongings, but no roommates. I had a duffel bag, but most of my stuff had been shipped ahead in a footlocker.

My mother – God bless her – had spent the summer sewing little cotton strips into every towel and washcloth, every article of clothing, even each sock and pair of underwear. 01582. My laundry number. She hated doing that. But it was required. That’s how the laundry workers kept track of the dirty clothes we bundled and threw down the chute each week, before retrieving them clean, folded and shrunken smaller each Friday.

Feeling awkward there alone in the three-room quad, I went off to find my footlocker. It was with dozens, hundreds of others stored in the old fieldhouse, an airplane hangar with dirt floors and crumbling bricks, awaiting retrieval by students whose worldly goods were reduced to those box containers with metal clasps and leather straps.

I soon learned my trunk was too heavy to carry by myself. I dragged it for a while but that embarrassed me. So I spoke my first words as a Notre Dame student when I asked a stranger — a fellow student with a kind face — if he’d help me lug my footlocker to Farley Hall. He said he was happy to help. He was also assigned to Farley. His name was Jim Stuart. But he came to be known as Stooey. Or maybe it was Stooie.

Stooey (or Stooie) had met Ace who had met Dave who was rooming in a triple with Duffey and Leo. A couple of my roommates — Yob and Hanson — showed up, and we all went off to dinner together. By coincidence and destiny, these guys would become my closest friends, the guys with whom I shared all our college experiences, and some became the men whose lives — and wives and children — threaded into and out of my life for decades.

I remember our first meal together. I realized immediately I was in over my head — because, for some reason, the conversation turned to naming all the U.S. presidents in chronological order. Seriously.

I had an uncle named Millard but thought Millard Fillmore was a joke, a ruse to further expose my inadequate book learning. Samuel Taylor Coleridge sounded like a president to me. So did Oliver Wendell Holmes. But not Chester Arthur or Franklin Pierce. And everyone knew that Grover Cleveland was an old-time baseball player, not a president.

It was during such interactions that we all found our place, established our identities in this new pack of playmates and peers. We were thrown together and expected to swim. I do not recall any parents being around, nor any kind of formal orientation, although I remember a “freshman mixer” with Saint Mary’s students through which hordes of boys and hordes of girls were put in close proximity to one another. The purpose of this mixer was blatant but unwieldy. Who would break ranks to publically fetch a girl?

Surely there must have been some more official mass gathering, but I don’t remember one. I do recall taking a standardized placement test in Washington Hall where we were squeezed together and given wooden planks the size of a desk top to write upon, filling in those little ovals with our No. 2 pencils. I got so hot and stressed out that my perspiration and sweaty hands smeared graphite all over my soggy answer sheets until I panicked and bolted, opting to take a walk around the lakes instead.

My self-esteem got a lift later that day when we headed to the lake with a hidden beach and went for a swim. A couple of the guys had to be coaxed into the shallow water. It seemed unfathomable to me that an 18-year-old had gone through life without learning to swim, but there they were — afraid to wade waist-deep, then eventually holding onto the safety ropes as they bravely struggled to the wooden raft where the rest of us were happily leaping into the lake. They sat and watched but were afraid to jump.

Swimming was again a source of demarcation a day or two later when we all had to take the swim test for P.E. class. We did so at the Rockne pool, each of us naked. Seriously. It was an all-male school at the time, but still. Imagine 40 or 50 of us poolside together, then leaping, splashing and swimming en masse, all nude. Or try not to imagine it. But do not doubt the reality of this get-to-know-you pool party.

The arrival of freshmen is far different today. For one thing, mass nudity is discouraged. And there are signs pointing to residence halls, yellow-jacketed ushers and lines of vehicles packed to the gills, four days of orientation activities and programming — and not only for students but for the hundreds of parents who descend upon campus. Each freshman is met at the residence hall by a happy band of greeters to make them feel welcomed and well-adjusted and right at home. 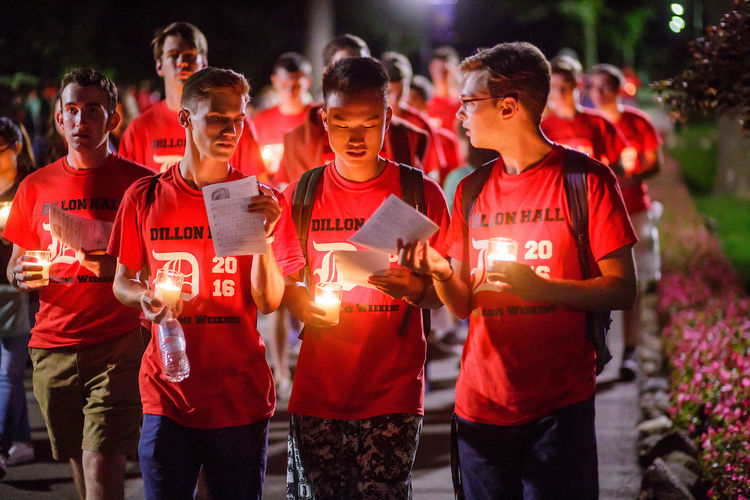 First-year students at their inaugural class visit to the Grotto. Photo by Peter Ringenberg

It’s actually one of my favorite times of year. I like watching the parents helping their offspring move in, lugging boxes and wheeling carts and hugging, saying goodbye, letting go, crying, smiling, launching their kids into the next phase of their life journey — the pride of achievement and the pain of loss.

I do not witness these rituals and familial interactions without thinking of my own parents, now gone. How many times did my mother ask me if I was sure I wanted to go alone? Didn’t I want my father to go along?

Years would pass before I realized she wasn’t asking for my benefit but his. Neither of my parents had gone to college. When I was accepted to Notre Dame, I learned for the first time it had been their dream from the day I was born that their son would attend Notre Dame. How proud my dad would have been to make that trip with me, to be there, delivering his son to Notre Dame, to savor for maybe a day or two the harvest of his sacrifice for my education, my life.

He never asked for himself. And I was thinking of me. That’s how it worked back then.