On the night before Christmas, when I was little, the very air would be teeming with excitation. The world felt wondrous and magical and alive in anticipation of the unbelievable making a real-life visit.

Santa Claus was coming to town. And flying reindeer. Arriving by sled. Gift-giver dropping down chimneys. Bestowing presents miraculous in nature — delivered to children everywhere, yet granting personal wishes. I loved it. I loved the stories, the myth, the magic of possibility. 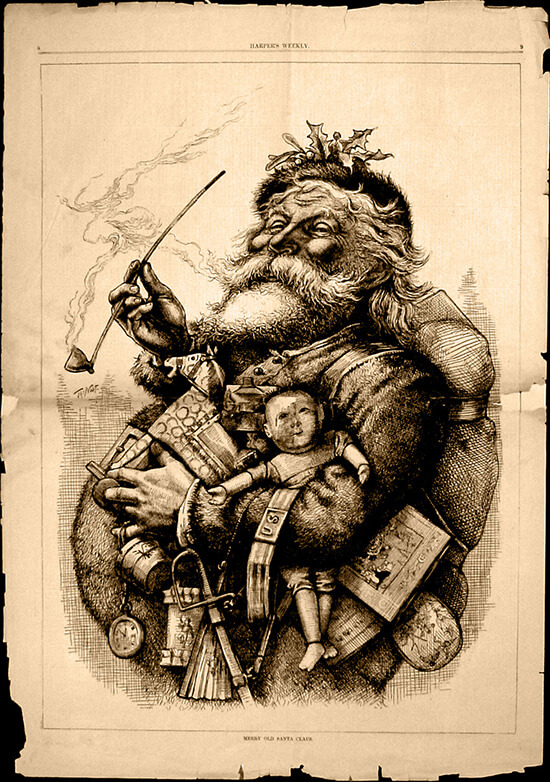 It wasn’t Christmas Day as much as Christmas Eve. Everything poised in hope and promise. The tree, the stockings hung from the mantel, the idea of Santa Claus sailing around the earth, in the dark of night, and landing at 721 Kirby Place. And the palpable thrill of the final acts: Cookies on a plate, glass of milk, carrots for the reindeer, the intersection of faith and mystery, make-believe and homemade treats left for the jolly stranger who would come — right to this very spot — while I slept.

It wasn’t just Santa Claus, though. There was the aura of that first Christmas night. Angels and shepherds, the stable, straw and radiant starry sky. That miracle, too, winning my imagination. God’s Son coming to earth as a baby on the lonely, mystical plains in a land far, far away. The power of it all!

There was Midnight Mass, the beautiful music, the choir, our resplendently ornate church packed with believers, smelling of incense, lush with green boughs, poinsettias and garland. I recall one year stepping out of the church at 2 a.m. as large feathers of snow drifted through the air — a sight rarely seen in my Louisiana hometown. I don’t know if the world has ever felt as holy and as right as it did right then. God and family and the enchantments of spirit turned real. Magic in the air, as real as the vapor we exhaled that crystal cold night.

A year or two ago I was talking to a friend at a pre-Christmas social hour. We were trading information on travel plans and family obligations, Christmas traditions and keeping Santa Claus alive for our kids. “You know,” he said, “I really don’t think life is ever the same after you stop believing in Santa Claus.”

I knew exactly what he meant. And I could vividly recall when that realization bombed my being. My older sister leaked the news but I went to my mom for confirmation. I so wanted to believe, even though I maybe suspected it to be so. I asked and she replied, “Do you want to know the truth?”

Well now. That’s a line that makes any myth evaporate into thin air.

And so Christmas was never really the same. And my life hasn’t really ever been the same — although you could say I’ve been seeking the magic ever since.

I think it was the same year I learned there was no Santa Claus that my mom, sensing my gloominess, said, “Come with me,” and got me in the car and loaded it up with food, some hand-me-downs and presents wrapped like any others.

She drove to the other side of the levee. This is where black people lived; we called them “colored” back then. And they lived in rows of shanties, shacks, shotgun houses. Rusted, corrugated tin roofs. Homes built as slave quarters. Molly was the daughter of a slave. She and other women my mother knew in this part of town worked for my mother’s friends. But they lived here, on the other side of the levee, without paved streets, in houses with walls so splintered, ill-fitted and raggedy that you could see through them.

They had children like me, except not exactly like me. And my mother delivered clothes and some toys and homemade cakes and cookies. And I saw another side of Christmas. It was a great gift my mom gave me that year.

I still loved Christmas Eve. I loved being home from college at Christmas, loved the rituals and traditions of the night before Christmas, the warmth and love of family. I still loved Midnight Mass and sensed the sacred everywhere. Still felt the holy poignancy of that original Christmas, the incarnated incredibility of God’s intrusion into the affairs of humankind.

And later on I loved being Santa Claus to my children, giving gifts like he existed and nurturing his presence in our home throughout the years — with these acts of elfish generosity bringing its own realization of Christmas spirit: that we are all called to be Santa Claus, we all are asked to take our turn.

And yet sometimes still, long past midnight on certain Christmas Eves, when I have been alone arranging presents by fireplace and tree, dark and quiet house, plate of cookies waiting, I would pause sometimes, thinking I had caught a glimpse or shadow, thinking that this just might be the year, that he just might show up after all. I could almost see him.

There is faith and there is pretending. And there is helping to make life what we want it to be. And it all works together somehow to make that Christmas spirit.