It’s always risky for an editor to pick up a ringing phone — especially when the most recent issue is in the mail.

You never know who’s waiting at the other end of the line, what story has hit a nerve. Phone calls are always an ambush; you can be under fire before you get your wits about you. Then again, the ringing phone might not even be a reader. But it is. Gordon DiRenzo. Class of 1956. 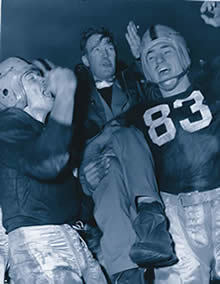 I’m quickly rifling through the imaginary issue in my head, trying to recall what’s on page 20. Is it the Health and Human Services lawsuit? The edgy essay about divisions within the Catholic Church? Before I can retrieve — “Hey, where’d you get that photo? The photo of Leahy.”

“Uh,” I say, “the University Archives, I think. Pretty sure.”

“I took that picture,” the caller says.

Uh oh, I’m thinking, did we not give a photo credit?

“I’m just wondering how you got it because I know only two prints of that picture exist.”

So here’s the deal: Gordon J. DiRenzo is a very nice man. He has three degrees from Notre Dame, including a doctorate in sociology, and he is a professor at the University of Delaware. And all he wants is to tell me the story of the photo.

So he tells me and, because I didn’t take notes, I ask him to write me the details. It’s pretty fun.

“Last Tuesday evening, I settled down to read the magazine. As I am thumbing through, page 20 appears at which time I momentarily, and literally, had a mental disconnect in which I experienced a strange déjà vu about the photograph on that page. And then I instantly realized that this full-page photograph of Leahy and his players was mine!”

The photo, he explained, was taken December 5, 1953, after a 40-14 victory over SMU at the conclusion of Leahy’s last, and undefeated, season at Notre Dame.

DiRenzo was on the sidelines as a student photographer for The Scholastic. “Leahy was being hoisted,” he wrote, “by Don Penza (right), captain of the 1953 team, and either Joe Lee or Dan Shannon, captain of the 1954 team, as they faced him toward the student body to receive its thunderous applause. It was one of the greatest days, greatest victories and one of the greatest seasons in the history of Notre Dame football.”

But, he continues, “The photograph was never published. In fact, to the best of my recollection, the film was not developed for several days. Hence, I didn’t know what I had.”

DiRenzo eventually developed the film and the photo became a favorite of his. “I knew that it was destined to be given a place of honor in my office or home.”

A decade later, in 1964, DiRenzo sent the photo to Leahy, asking him to autograph it. He did so, wrote back, and the coach asked for his own copy. The photographer, who still considers the coach a personal idol, happily complied. His own autographed copy has hung in his study for more than 59 years.

“One Saturday morning a few years ago,” he continued, “I was strolling in the Rock and noted the video screens showing scenes of Notre Dame football over the years. I glanced at one screen at that crucial moment and saw my photo. I was amazed — and excited. I wondered how the photo got into that video. It had to have come to the University Archives from the Leahy family.”

DiRenzo still has the correspondence between him and Leahy from 1964. He sent me copies and noted the handwritten P.S.

Just below the typed sentence, “I would very much appreciate having a copy of this photo; it brings back wonderful memories,” Leahy wrote by hand: “This particular photo more closely resembles the exit of an uninvited guest who managed to remain for a few doubles at a New Year’s Eve party.” And it does.