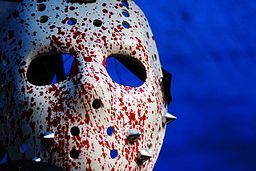 It’s the blood that bothers me. It didn’t always.

When I was a kid playing war, I wore bandages — white sheets ripped and splattered with red nail polish — to convey that macho, against-all-odds look. I was re-enacting history then, playing the part of boyhood heroes from battlefields far distant in both space and time.

When the U.S. sent real people into Vietnam and I watched the combat movies during the nightly news, pretending to be a soldier seemed very wrong, even distasteful to me. The clash between reality and fantasy was just too jarring.

The neighborhood trick-or-treaters seem to like blood and gore, too. They came to my door this Halloween with costume blood dripping and oozing, often from neck and face wounds. They are victims of slashers and ghouls and bad guys gone berserk. I don’t like it.

I like Halloween — the pumpkins and ghosty, witchy decorations, and the make-believe dress-up and going door-to-door on a leaf-filled, blustery autumn evening (with any luck, with a full moon and eeriness in the air). I don’t mind the werewolves and Frankensteins, the Spidermen, Darth Vaders or even kids dressed like Jason in his hockey mask or Michael Myers from the Halloween movies.

But kids painted with blood gives me the creeps. Kids with fake knives sticking out of them: It makes me shudder.

Too often I think about the kids here in South Bend who have been stabbed to death, beaten to death by parents, caught innocently in a crossfire where the gunmen are only slightly older than children, teenagers with their own bad sense of reality.

Of course, parents and child psychologists have been wringing their hands for decades over America’s appetite for violence. They and media folks have long debated the effect of violence, whether or not it’s cathartic, or harmful, or leads young people to perform violent acts, or if the vicarious action is healthy, but there are no definitive answers.

The bottom line: Violence makes money, and needs to ramp up in order to retain its shock value, its appeal, and no one will put an end to things that make somebody lots of money.

But as each year goes by I become increasingly squeamish and concerned. And the reason is that — tragically — for far too many children in the world today what entertains so many Americans is a way of life.

Children are beaten and shot. Maniacs are on the loose. Killers are gunning people down. Screaming people really do get chased through the house by drug-crazed murderers. And that’s in America.

The children in Afghanistan and Iraq, Syria, Somalia, Rwanda, Libya, Israel, Palestine . . . they live in a state of war, they live in killing fields, where children butcher each other, and bombs go off, and mutilation and madness are ways of life.

And yet we, here in America, repulsed by atrocities around the world, continue to be entertained by the wicked acts we so avidly watch on television and in the movies. In fact, the more violently the world spins, the greater our appetite, it seems, for brutality and blood. I don’t get it.

I don’t understand how people are entertained by the horrors that happen to real people in real life. Once upon a time, when I saw what real war looked like, I put down the toy guns and felt bad I had ever thought to glamorize it.

I remember a running argument I once had with my parents when they showed no interest in movies I’d recommend — Vietnam war movies, or sober period pieces that showed the down-low, gritty side of life, those gloomily grave movies that portrayed life as real and earnest and bleak, or movies about racial issues or poverty and injustice somewhere.

They had seen all that, they said. They had lived through the Depression and my dad and his friends had gone to war. They wanted movies to help them escape real life; they wanted romance and happy endings and good triumphing over evil.

I couldn’t stand such a Pollyanna attitude. So we argued for years, and I found the two of them exasperatingly ostrich-like.

But I now have arrived at that place myself.

I don’t need to watch war movies anymore; life provides its own life and death drama. I don’t enjoy being scared; I get enough trepidation reading the news. And it’s too late for me to change the world, to appeal to the conscience of a wildly lucrative industry; but I can choose what I am entertained and edified by, the things that might occasionally be uplifting, or make me laugh.

And that isn’t killing and blood, or the evil things that people do to each other.

Kerry Temple is the editor of this magazine. Email him at ktemple@nd.edu.